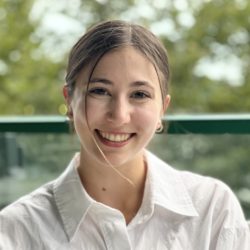 Eliana Reynolds is a Research Associate for the Nuclear Information Project at the Federation of American Scientists, where she researches the status and trends of global nuclear forces and the role of nuclear weapons. Previously, Eliana worked as a Project Associate for DPRK Counterproliferation at CRDF Global, focusing on WMD nonproliferation initiatives to curb North Korea’s ability to gain revenue to build its weapons programs.

Eliana graduated with her bachelor’s in Political Science and minors in Music and Korean in 2021 from the University of Maryland, Baltimore County (UMBC). As an undergraduate, she co-founded and served as President of UMBC’s International Justice Mission chapter, volunteered as a research assistant studying terrorism deterrence in the Political Science Department, and completed an honors thesis on nuclear deterrence in North Korea. After graduating, Eliana completed the Critical Language Scholarship program for Korean through the U.S. Department of State and then began working as a Policy & Program Coordinator for the Truman Center for National Policy and Truman National Security Project.