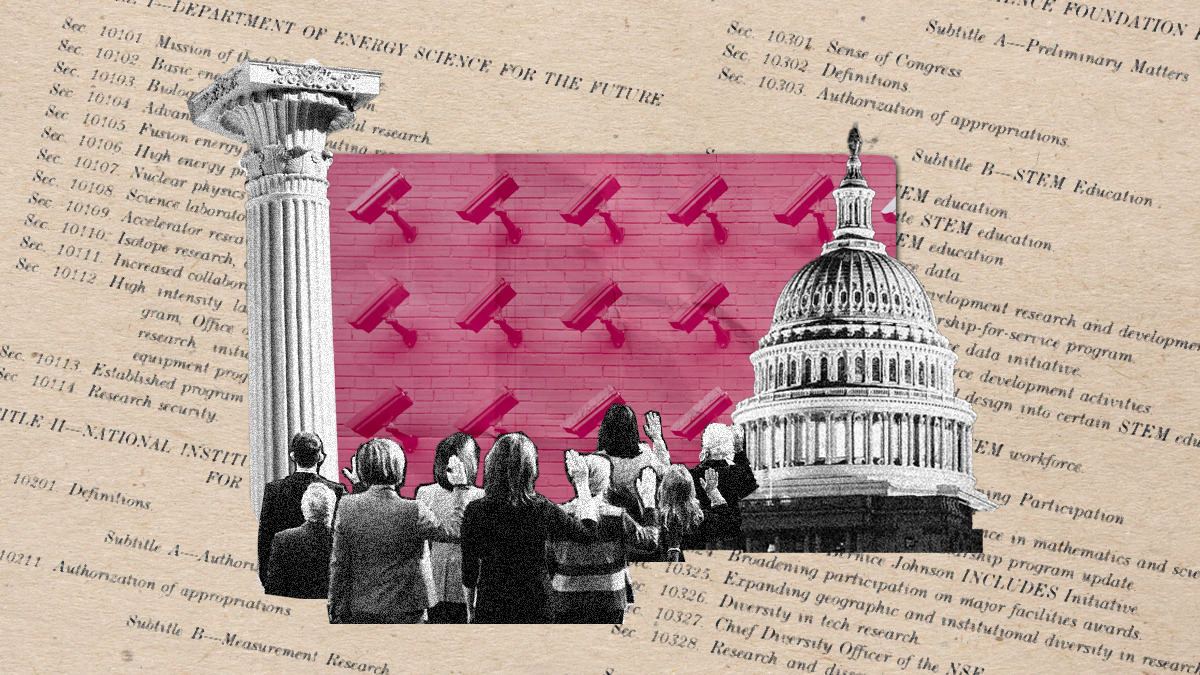 Global competition for advanced technology leadership is fierce. China continues to build scholarship capacity across science and engineering disciplines, has surpassed the United States in knowledge- and technology-intensive manufacturing, and is hot on American heels for the global lead in R&D investment. In the U.S., domestic manufacturing jobs have enjoyed a recent surge, but the U.S. trade deficit in high technology stood at nearly $200 billion in 2021, and appears set to far surpass that this year.

The federal government has played an historic role in fostering basic science and the development of critical technologies like the Internet and GPS, and federal investments have helped drive manufacturing and high-tech cluster development for nearly a century. In light of that role, the 118th Congress should act decisively to sustain America’s competitive edge in industries of the future.

R&D Policy. The most important step the new Congress can take is to ensure robust appropriations for the array of science and innovation initiatives authorized in the bipartisan CHIPS and Science Act. New and ongoing activities in agencies like the National Science Foundation (NSF), the Department of Energy Office of Science (SC), the National Institute of Standards and Technology (NIST), and the Department of Commerce will drive scientific excellence, STEM talent, and industrial competitiveness in key areas like advanced communications, materials, semiconductors, and others.

Congress should also continue to build out Manufacturing USA, a network of highly effective public-private innovation institutes serving defense, energy, life sciences, and other sectors. In addition to CHIPS-authorized funding boosts, the Manufacturing USA network could be enhanced by regional demonstration centers, talent programs to align American worker skills with industry needs, and other steps.

As Congress invests, lawmakers should also seek out opportunities to fund alternative, novel models for research including, for example, focused research organizations (FROs) or institutes for independent scholarship. While the federal science enterprise remains an engine of discovery and progress, new ways of doing science can foster untapped creativity and let scientists and engineers tackle new problems or come up with unforeseen breakthroughs. For instance, the CEO-led FRO model is intended to facilitate mid-scale research projects to produce new public goods (like technologies, techniques, processes, or datasets) that in turn have a catalyzing effect on productivity in the broader science enterprise. Congress should work with agencies to create space and find opportunities to foster such novel approaches.

Congress could also consider legislative reforms to empower national labs to innovate and commercialize cutting-edge technology. For instance, legislation could extend Enhanced Use Lease (EUL) authority to allow for public-private research facilities on surplus federal lands, or create a federally chartered technology transfer organization inspired by similar models at effective universities. Such capabilities would further leverage the labs as engines for regional innovation.

Innovation & Entrepreneurship. The new Congress has the opportunity to invest in critical technologies through new funds and public-private partnerships that drive growth of frontier technology companies. Congress can also invest in the broader ecosystem to make innovation sustainable, expand the geography of innovation, and support equitable access to opportunities. Such investments would continue the momentum that Congress established in 2022.

A major element of this momentum is bipartisan support for the Regional Technology and Innovation Hubs program authorized in Section 10621 of the bipartisan CHIPS and Science Act. The new program, intended to catalyze and expand high-tech industry clusters in up-and-coming regions around the United States, was authorized at $10 billion over five years in CHIPS, and received a $500 million down payment in appropriations so far. Now, the 118th Congress should continue and expand upon that support, while more generally continuing to build out place-based and sustainable infrastructure that advances deep-tech and tough-tech industries like the bioeconomy, advanced manufacturing, and clean energy.

In addition, Congress should find ways to support early-stage companies at the technology frontier, through establishing and funding a Frontier Tech consortium or a Deep Tech capital fund to coordinate public investments across government agencies. This would ensure that government funding is used efficiently to spur private investment in early stage frontier tech companies within critical national industrial base areas.

Artificial Intelligence. As AI technologies advance, the government needs to harness them safely and efficiently. Congress should include a National Framework for AI Procurement in the next NDAA to establish a standardized process for vetting AI applications proposed for public use, in line with a 2020 Executive Order on “Promoting the Use of Trustworthy Artificial Intelligence in the Federal Government.” To protect the privacy and security of those using or affected by all AI products, this framework should include a strategy for investing in and deploying privacy-preserving machine learning (PPML).

Space Innovation. While some NASA language was included in CHIPS and Science, space sector innovation didn’t get nearly as much attention as it could have. The 118th should remedy this by placing special focus on investments and policy reform to enhance U.S. ability to innovate in the space sector. The potential opportunity is huge: space is likely to become a trillion-dollar sector before midcentury.

Multiple areas are ripe for action. One is in the area of orbital debris. There are thousands of pieces of space junk now in low-earth orbit – often emerging from defunct satellites or collisions – and these pose a substantial hazard to commercial space operations as well as U.S. national security. To deal with this issue, Congress could work with relevant agencies including the Departments of Defense and Commerce to develop and fund an advanced market commitment for space debris to incentivize solutions via the possibility of investment returns. Congress could also take another run at SPACE Act ideas that were left out of the final Chips and Science text, to codify responsibility for civilian Space Situational Awareness (S.S.A.) with the Department of Commerce and to authorize the creation of one or more centers of excellence for S.S.A.

Congress should also work with the Administration to advance in-space servicing, assembly, and manufacturing (ISAM), an emerging suite of capabilities that offer substantial upside for the future space economy. The White House has already released an ISAM strategy and implementation plan, but substantial action is still needed, and Congress can provide leadership and support in this area. For example, Congress can work with NASA to create an Advanced Space Architectures Program, which would operate under a public-private consortium model to pursue missions that develop new technological capabilities for the U.S. space sector. Congress can also encourage federal agencies and the White House to develop a public roadmap of needs, goals and desired capabilities in the emerging ISAM sector, and to work toward establishing ISAM-specific funding wedges in key agency budget requests to better track related investments for concerted appropriations decisions.