Earlier this year Congress passed the CHIPS And Science Act: a once-in-a-generation piece of legislation to secure U.S. semiconductor manufacturing, enhance U.S. science investment, and foster the next generation of STEM talent.

But at the core of that legislation are aggressive spending targets for the National Science Foundation (NSF), the Department of Energy Office of Science (DOE SC), and the National Institute of Standards and Technology (NIST). These targets tee all of these agencies up for sustained long-term growth, but Congress has to provide actual dollars to make it happen.  Now, amid a looming funding deadline December 16, Congress is running the risk of falling substantially short of its own bipartisan aspirations.

To tally up the current shortfalls between current appropriations and aspirational CHIPS targets, FAS has produced a short report breaking down key programs and provisions by agency. Read below for a summary of major takeaways, or download now for the full report.

What is CHIPS and Science?

The CHIPS And Science Act has some of its original roots in calls almost three years ago to create a new technology directorate at NSF, ramp up federal science funding, and create regional tech hubs around the country. These investments are still at the final law’s core, along with policies to achieve additional goals like achieving energy security and fostering STEM talent. Collective program changes in the law offer the potential to boost domestic manufacturing, tackle supply-chain vulnerabilities, and power the workforce of the future in emerging industries.

A key aspect of CHIPS And Science is the inclusion in Section 10387 of a list of 10 critical technology areas (including AI, quantum science, robotics, biotech, and others) and five societal challenge areas (like national security, industrial productivity, and climate change). These priorities are intended to guide investments by the new NSF technology directorate, and inform other activities like long-term strategy development.

Again, a key component of CHIPS And Science is rising spending targets, or authorizations, from the current fiscal year (FY 2023) through FY 2027. In the first year, NSF, DOE SC, and NIST are slated for a 28% year-over-year increase to kick off a long-term rise (see graph below). But that’s just a target, and not a guarantee that actual funding will arrive.

These agencies are funded through annual appropriations bills, typically marked up by Congress in summer and finalized each fall. To date, the House has completed work on six out of twelve annual spending bills, while Senate Democrats have released a round of proposals that have yet to receive necessary bipartisan action.

How are things shaping up for the three research agencies included in CHIPS? While FY 2023 appropriations for the three agencies would provide at least moderate year-over-year boosts, they’re also substantially short of the aspirational targets set thus far. In the aggregate, as we show in our report, appropriations for the NSF, DOE SC, and NIST are currently $2.4 billion or 11% short of the bipartisan CHIPS targets in the Senate, and $3.2 billion or 15% short in the House, as of November 2022.

Legislators will still have a chance to make up this ground in conference talks for the final omnibus, which should arrive very soon. Science advocates, including universities, companies, and science societies, have been at work in recent months calling for robust appropriations. Robust funding closer to the CHIPS targets will ultimately put U.S. scientists and companies in a better position to compete and win in fields with emerging technology on the global stage.

The appropriations shortfalls are fairly broad-based for NSF and DOE SC, while more narrow for NIST. Here’s a quick recap of the state of appropriations for each; for more, see the full report.

National Science Foundation: NSF forms a cornerstone of federal R&D and is the leading funder for non-medical research at U.S Universities. It’s particularly prominent in research and STEM education in disciplines like chemistry that undergird excellence in the technology priorities identified in Section 10387.

Currently, House and Senate appropriations are $2.3 billion and $1.6 billion short of the CHIPS And Science authorizations, respectively – shortfalls that some experts warn could sink U.S. competitive ambitions. This includes a shortfall of at least $738 million for the primary NSF research account, funding for which is important for ensuring NSF has sufficient resources to boost existing programs and allow the new technology directorate to get off to the running start Congress intended. In addition, STEM education appropriations are $700 million shy of CHIPS in the House and $623 million in the Senate. A few of many areas that could do with a top-up include: 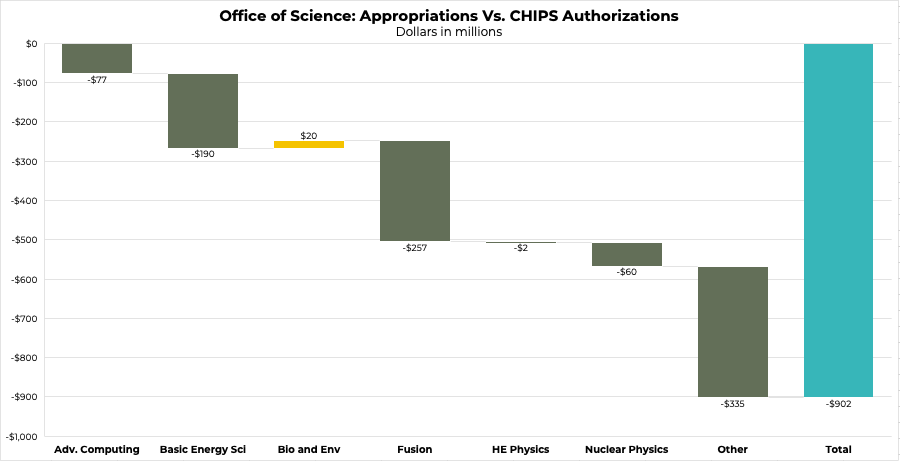 Office of Science: DOE SC is the largest funder of the physical sciences, and pursues several crosscutting research initiatives directly aligned with CHIPS technology priorities, including in microelectronics, quantum science, critical materials, and other areas. This work is spread over the Office’s six major research programs, appropriations for most of which are well below the CHIPS targets (see graph above). Overall, House and Senate appropriations are currently $902 million and $802 million short of the authorizations established in CHIPS, respectively.

NIST. The agency’s R&D activities cover several CHIPS And Science technology priorities including cybersecurity, advanced communications, AI, quantum science, and biotechnology. NIST also boasts a wide-ranging system of manufacturing extension centers in all 50 states and Puerto Rico, which help thousands of U.S. manufacturers grow and innovate every year. Topline NIST appropriations to date have gotten reasonably close to CHIPS targets in the House, and far exceed the target in the Senate proposal, though this is primarily driven by construction project earmarks. Still, appropriations so far for NIST’s primary lab research account are not far from CHIPS And Science targets.

For Congress to move from the current status of appropriations to a final deal (hopefully) closer to CHIPS, a few things have to happen. First, leadership has to agree on an overall spending topline or what’s known as a “302(a)” allocation, with robust increases for nondefense spending in particular: all three of NSF, DOE SC, and NIST are funded via the nondefense budget, and a good nondefense number is necessary to create room for budget boosts to fulfill the CHIPS vision.

Second, Congress will have to provide adequate increases for CHIPS-crucial spending bills – specifically, the Commerce-Justice-Science bill (for NSF and NIST, as well as other CHIPS priorities like the tech hubs) and the Energy & Water bill (for DOE programs), through are what is known as “302(b)” allocations. With competing interests and priorities making claims on taxpayer dollars in every bill, its incumbent for appropriations leaders to ensure spending bills are big enough to provide room for CHIPS competitiveness growth.

Finally, legislators and staff will have to make final decisions on agency and programmatic spending levels. There’s a golden opportunity to top up those key programs for U.S. technology leadership authorized in CHIPS – but the clock is ticking.