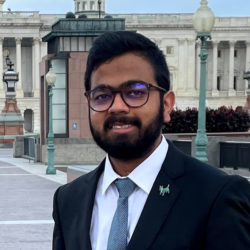 Divyansh Kaushik is a Science and Technology Fellow for the Federation of American Scientists. He is a PhD candidate in the School of Computer Science at Carnegie Mellon University (CMU) where he is an Amazon Graduate Research Fellow studying ways to design human-aligned AI systems that are reliable in real world settings. He also holds a Masters degree from CMU in artificial intelligence. He also serves as the President of CMU’s Graduate Student Assembly, a role in which he has led advocacy efforts on Capitol Hill around higher education, science, and immigration issues and worked with members of Congress and their staff on several pieces of legislation that have been signed into law. In early 2021, alongside several business and community leaders, he helped the White House and HHS found the COVID-19 Community Corps which has since grown to over 15,000 members, including individuals and organizations. From November 2020 to January 2021, he worked with the Biden-Harris transition to bring forth several policy ideas to advance US R&D enterprise and maintain our global competitiveness.

He has previously served on the national advisory board of the Students Learn Students Vote Coalition, the largest nonpartisan network in the country dedicated to increasing student voter participation. When he is not doing research, he loves listening to jazz, cooking delicious north Indian food, playing the piano, and going on hikes. And when he’s not doing any of that, he can be found writing on several policy issues or in the halls of Capitol Hill advocating for science policy. His work has been featured in prominent national media outlets including Forbes, Politico, Chronicle of Higher Education, US News and PBS Newshour.