After four years of internal deliberations, the U.S. Air Force has decided to empty 50 Minuteman III ICBMs from 50 of the nation’s 450 ICBM silos. Instead of destroying the empty silos, however, they will be kept “warm” to allow reloading the missiles in the future if necessary.

The decision to retain the silos rather than destroy them is in sharp contrast to the destruction of 100 empty silos currently underway at Malmstrom AFB and F.E. Warren AFB. Those silos were emptied of Minuteman and MX ICBMs in 2005-2008 by the Bush administration and are scheduled to be destroyed by 2016.

A chart in a DOD’s unclassified report to Congress shows that the plan to retain the 50 non-operational ICBM launchers is different than the treaty implementation efforts so far, which have been designed to “eliminate” non-operational launchers.

Indeed, a senior defense official told the Associated Press that the Pentagon had never before structured its ICBM force with a substantial number of missiles in standby status.

If, for example, two SSBNs (with 40 missiles), two ICBMs, and eight bombers were undergoing maintenance at the same time, no additional launchers could be removed from deployed status for maintenance unless the deployed force was reduced below 700 launchers. This is not inconceivable. In September 2013, for example, 76 SLBM launchers and 21 B-2A/B-52H bombers (a total of 97 launchers) were counted as non-deployed.

Why the administration would accept such constraints on the flexibility of the U.S. nuclear force posture simply to satisfy the demands of the so-called ICBM caucus in Congress is baffling.

With the DOD New START force structure decision, the future force is now set. The DOD report includes the table below (note: a column with the 2014 deployed launchers has been added to improve comparison), which is also reproduced in a fact sheet (with some corrections and additional information about bombers): 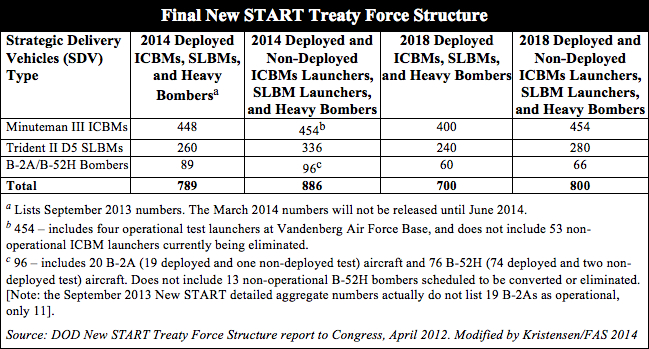 Other than the decision to retain, rather than dismantle, the excess 50 ICBM silos, there are no real surprises. The reductions in actual nuclear forces are very modest. Moreover, the June 2013 Nuclear Weapons Employment Strategy of the United States, which is intended to look beyond 2018, ordered no additional force structure reductions below the New START limits, yet determined that the United States could meet its national and international obligations with up to one-third fewer deployed weapons (1,100 warheads on 470 launchers).

What would be the scenario in which the United States would have to redeploy missiles in the extra 50 “warm” silos that the administration has decided to retain? Notwithstanding the crisis in Ukraine, it is hard to envision one.

Unlike the United States, Russia is already well below the New START limit and currently has about 140 ICBMs in silos and another 170 on mobile launchers for a total force of a little over 300 missiles. Despite Russian deployment of new missiles, this ICBM force is likely to drop well below 300 by the early 2020s.

Moreover, the Pentagon determined in 2012 that Russia “would not be able to achieve a militarily significant advantage by any plausible expansion of its strategic nuclear forces, even in a cheating or breakout scenario under the New START Treaty” (emphasis added).

To compensate for the ICBM launcher imbalance and maintain some degree of overall parity with the U.S. arsenal, Russia is deploying more warheads on each of its ICBMs.

This top-heavy posture is bad for strategic stability. It is in the U.S. national security interest to reduce this disparity to increase strategic stability between the world’s two largest nuclear powers. The decision to retain excess ICBM silos instead of destroying them contributes to a Russian misperception that the United States is intent on retaining a strategic advantage and a breakout capability from the New START treaty to quickly increase its deployed nuclear forces if necessary.

The administration can and should change its decision and destroy the ICBM silos that are emptied under New START.