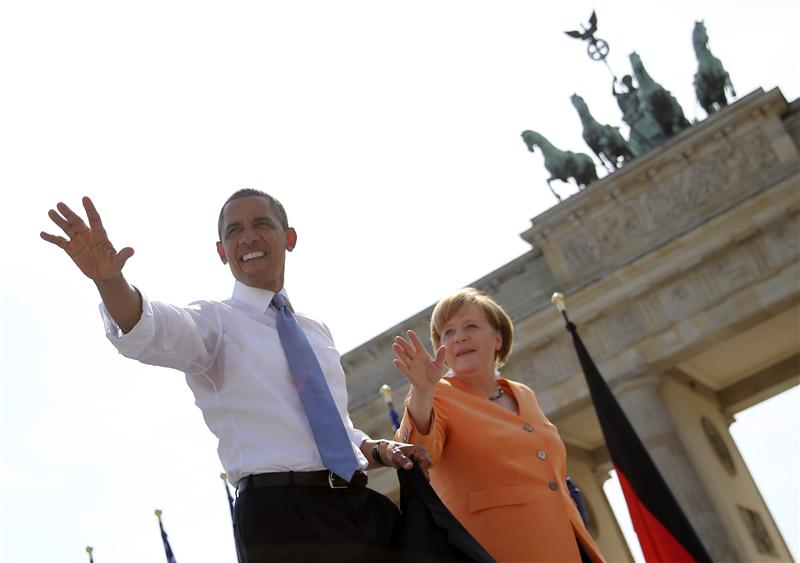 President Barack Obama’s Berlin speech failed to capture the nuclear disarmament spirit of the Prague speech four years ago. And no wonder. Back then Obama had to contrast with the Bush administration’s nuclear policies. This time Obama had to upstage his own record.

The only real nuclear weapons news that was included in the Berlin speech was a decision previously reported by the Center for Public Integrity that the administration is pursuing an “up to a one-third reduction” in deployed nuclear weapons established under New START.

Instead, the real nuclear news of the day were the results of the Obama administration’s long-awaited new guidance on nuclear weapons employment policy that was explained in a White House fact sheet and a more in-depth report to Congress.

From a nuclear arms control perspective, the new guidance is a mixed bag.

One the one hand, the guidance directs pursuit of additional reductions in deployed strategic warheads and less reliance on preparing for a surprise nuclear attack. On the other hand, the guidance reaffirms a commitment to core Cold War posture characteristics such as counterforce targeting, retaining a triad of strategic nuclear forces, and retaining non-strategic nuclear weapons forward deployed in Europe.

The top news is that the administration has decided that it can meet its security obligations with “up to one-third” fewer deployed strategic warheads that it is allowed under the New START treaty. That would imply that the guidance review has concluded that the United States needs 1,000-1,100 warheads deployed on land- and sea-based strategic warheads, down from the 1,550 permitted under the New START treaty.

It is not entirely clear from the public language, but it appears to be so, that these additional reductions will be pursued in negotiations with Russia rather than as reciprocal unilateral reductions.

Even though the nuclear weapons employment policy would allow for reductions below the New START Treaty levels, it does not direct any changes to the currently deployed forces of the United States. That is up to the follow-on process of the Secretary of Defense producing an updated Nuclear Weapons Employment Policy (NUWEP) appendix to the Guidance for the Employment of the Force (GEF), and the Chairman of the Joint Chiefs of Staff then producing an update to the nuclear supplement to the Joint Strategic Capabilities Plan (JSCP-N).

So if an when Russia agrees to cutting its deployed strategic warheads by up to one third, it could take several years before President Obama’s guidance actually affects the nuclear employment plans.

Already now, many news articles covering the Berlin speech misrepresent the “cut” by saying it would reduce the U.S. “arsenal” or “stockpile” by one third. But that is not accurate. The envisioned one-third reduction of deployed strategic warheads will not in and of itself destroy a single nuclear warhead or reduce the size of the bloated U.S. and Russian nuclear arsenals.

The new guidance recognizes, which is important although late, that the possibility of a disarming surprise nuclear attack has diminished significantly since the Cold War. Therefore, the guidance “directs DoD to examine further options to reduce the role of Launch Under Attack plays in U.S. planning, while retaining the ability to Launch Under Attack if directed.”

Launch under attack is the capability to be able to launch nuclear forces after detection that an adversary has initiated a major nuclear attack. Because it only takes about 30 minutes for an ICBM to fly from Russia over the North Pole, Launch Under Attack (LOA) has meant keeping hundreds of weapons on alert and ready to launch within minutes after receiving the launch order.

Barack Obama promised during his election campaign in 2007 that he would work with Russia to take nuclear weapons off “hair-trigger alert,” but the Nuclear Posture Review instead decided to continue the existing readiness of nuclear forces. Now the DOD is directed to study how to reduce LOA in nuclear strike planning but retain some LOA capability.

The guidance does not explicitly say – to the extent it is covered by the DOD report – that nuclear force will be retained on alert. The NPR makes such a statement clearly. The DOD guidance report only states that the practice of open-ocean targeting should be retained so that a weapon launched by mistake would land in the open ocean.

Despite the decision to reduce deployed strategic warheads and reduce Launch Under Attack, the guidance hedges against the change by stating that “the maintenance of a Triad and the ability to upload warheads ensures that, should any potential crisis emerge in the future, no adversary could conclude that any perceived benefits of attacking the United States or its Allies and partners are outweighed by the costs our response would impose on them.”

The new guidance reaffirms the Cold War practice of using nuclear forces to hold nuclear forces at risk. According to the DOD summary, the new guidance “requires the United States to maintain significant counterforce capabilities against potential adversaries” and explicitly “does not rely on a ‘counter-value’ or ‘minimum deterrence’ strategy.”

This reaffirmation is perhaps the single most important indicator that the new guidance fails to “put and end to Cold War thinking” as envisioned by the Prague speech.

Because “counterforce is preemptive or offensively reactive,” in the words of a STRATCOM-led study from 2002, reaffirmation of nuclear counterforce reaffirms highly offensive planning that is unnecessarily threatening for deterrence to work in the 21st Century. This condition is exacerbated because the reaffirmation of counterforce is associated with a decision to retain – albeit at a reduced level – the ability to Launch Under Attack if directed (see below).

The “warfighting” nature of nuclear counterforce drives requirements for Cold War-like postures and technical and operational requirements that sustain nuclear competition between major nuclear powers at a level that undercuts efforts to reduce the role and numbers of nuclear weapons.

Four years after the Nuclear Posture Review decided that the United States could not adopt a sole purpose of nuclear weapons to deter only nuclear attacks, the new guidance reaffirms this rejection by saying “we cannot adopt such a policy today.”

Even so, the guidance apparently reiterates the intention to work towards that goal over time. And it directs the DOD to undertake concrete steps to further reducing the role of nuclear weapons.

Even so, the guidance decides to retain a forward-based posture in Europe until NATO agrees it is time to change the posture. The last four years have shown that NATO is incapable of doing so because a few eastern NATO countries cling to Cold War perceptions about nuclear weapons in Europe that blocks progress.

The guidance also directs that the United States will continue to retain a large reserve of non-deployed warheads to hedge against technical failures in deployed warheads.

Now that warhead life-extension programs are underway, the guidance directs that DOD should only retain hedge warheads for those modified warheads until confidence is attained. This is a little cryptic because why would the DOD not do that, but the intension seems to be to avoid keeping the old hedge warheads longer than necessary.

Moreover, the guidance also states that all of the hedging against technical issues will provide enough reserve warheads to allow upload of additional warheads – including those removed under the New START Treaty – in response to a geopolitical development somewhere in the world.

This all suggests that we should not expect to see significant reductions in the hedge in the near future but that much of the current hedging strategy will be in place for the next decade and a half.

The Obama administration deserves credit for seeking further reductions in nuclear forces and the role of Launch of Warning in nuclear weapons employment planning. A White House fact sheet and a DOD report provide important information about the new nuclear weapons employment guidance, a controversial issue on which previous administrations have largely failed to brief the public.

The DOD’s report on the new guidance reiterates that it is U.S. policy to “seek the peace and security of a world without nuclear weapons,” but helpfully reminds that “it is imperative that we continue to take concrete steps toward it now.” This is helpful because Obama’s recognition in Prague that the goal of a world free of nuclear weapons might not be achieved in his lifetime has been twisted by opponents of reductions and disarmament to mean an affirmative “not in my lifetime!”

The guidance directs that nuclear “planning should focus on only those objectives and missions that are necessary for deterrence in the 21st century.” The force should be flexible enough, the guidance says, to be able to respond to “a wide range of options” by being able to “threaten credibly a wide range of nuclear responses if deterrence should fail.”

Unfortunately, the public documents do not shed any light on what those objectives and missions are or which ones have been deemed no longer necessary.

Instead, the official descriptions of the new guidance show that its retains much of the Cold War thinking that President Obama said in Prague four years ago that he wanted to put an end to. The reaffirmation of nuclear counterforce and retention of nuclear weapons in Europe are particularly disappointing, as is the decision to retain a large reserve of non-deployed warheads partly to be able to reverse reductions of deployed strategic warheads achieved under the New START Treaty.

In the coming months and years, these decisions will likely be used to justify expensive modernizations of nuclear forces and upgrades to nuclear warheads that will prompt many to ask what has actually changed.