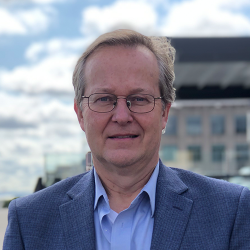 His collaboration with researchers at NRDC in 2010 resulted in an estimate of the size of the U.S. nuclear weapons stockpile that was only 13 weapons off the actual number declassified by the U.S. government.

Between 2002 and 2005, Kristensen was a consultant to the nuclear program at the Natural Resources Defense Council in Washington, D.C, where he researched nuclear weapons issues and wrote the report “U.S. Nuclear Weapons In Europe” (February 2005) and co-authored numerous articles including “What’s Behind Bush’s Nuclear Cuts” (Arms Control Today, October 2004) and “The Protection Paradox” (Bulletin of the Atomic Scientists, March/April 2004). Between 1998 and 2002, Kristensen directed the Nuclear Strategy Project at the Nautilus Institute in Berkeley, CA, and he was a Special Advisor to the Danish Ministry of Defense in 1997-1998 as a member of the Danish Defense Commission. He was a Senior Researcher with the Nuclear Information Unit of Greenpeace International in Washington D.C from 1991 to 1996, prior to which he coordinated the Greenpeace Nuclear Free Seas Campaign in Denmark, Norway, Finland and Sweden.