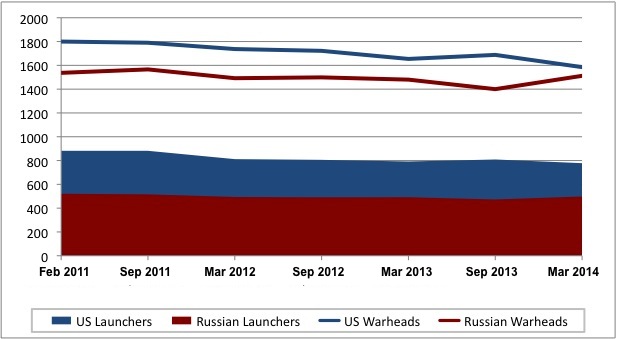 The latest aggregate data released by the US State Department for the New START treaty show that Russia has increased its counted deployed strategic nuclear forces over the past six months.

The data show that Russia increased its deployed launchers by 25 from 473 to 498, and the warheads attributed to those launchers increased by 112 from 1,400 to 1,512 compared with the previous count in September 2013.

During the same period, the United States decreased its number of deployed launchers by 31 from 809 to 778, and the warheads attributed to those launchers decreased by 103 from 1,688 to 1,585.

The increase of the Russian count does not indicate that its in increasing its strategic nuclear forces but reflects fluctuations in the number of launchers and their attributed warheads at the time of the count. At the time of the previous data release in September 2013, the United States appeared to have increased its forces. But that was also an anomaly reflecting temporary fluctuations in the deployed force.

Since the treaty was signed in 2010, the United States has reduced its counted strategic forces by 104 deployed launchers and 215 warheads; Russia has reduced its counted force by 23 launchers and  25 warheads. The reductions are modest compared with the two countries total inventories of nuclear warheads: Approximately 4,650 stockpiled warheads for the United States (with another 2,700 awaiting dismantlement) and 4,300 stockpiled warheads for Russia (with another 3,500 awaiting dismantlement).

For analysis of the previous New START data, see: /blogs/security/2013/10/newstartsep2013/