On 18 December 2021, India tested its new Agni-P medium-range ballistic missile from its Integrated Test Range on Abdul Kalam Island. This was the second test of the missile, the first test having been conducted in June 2021.

Our friends at Planet Labs PBC managed to capture an image of the Agni-P launcher sitting on the launch pad the day before the test took place. 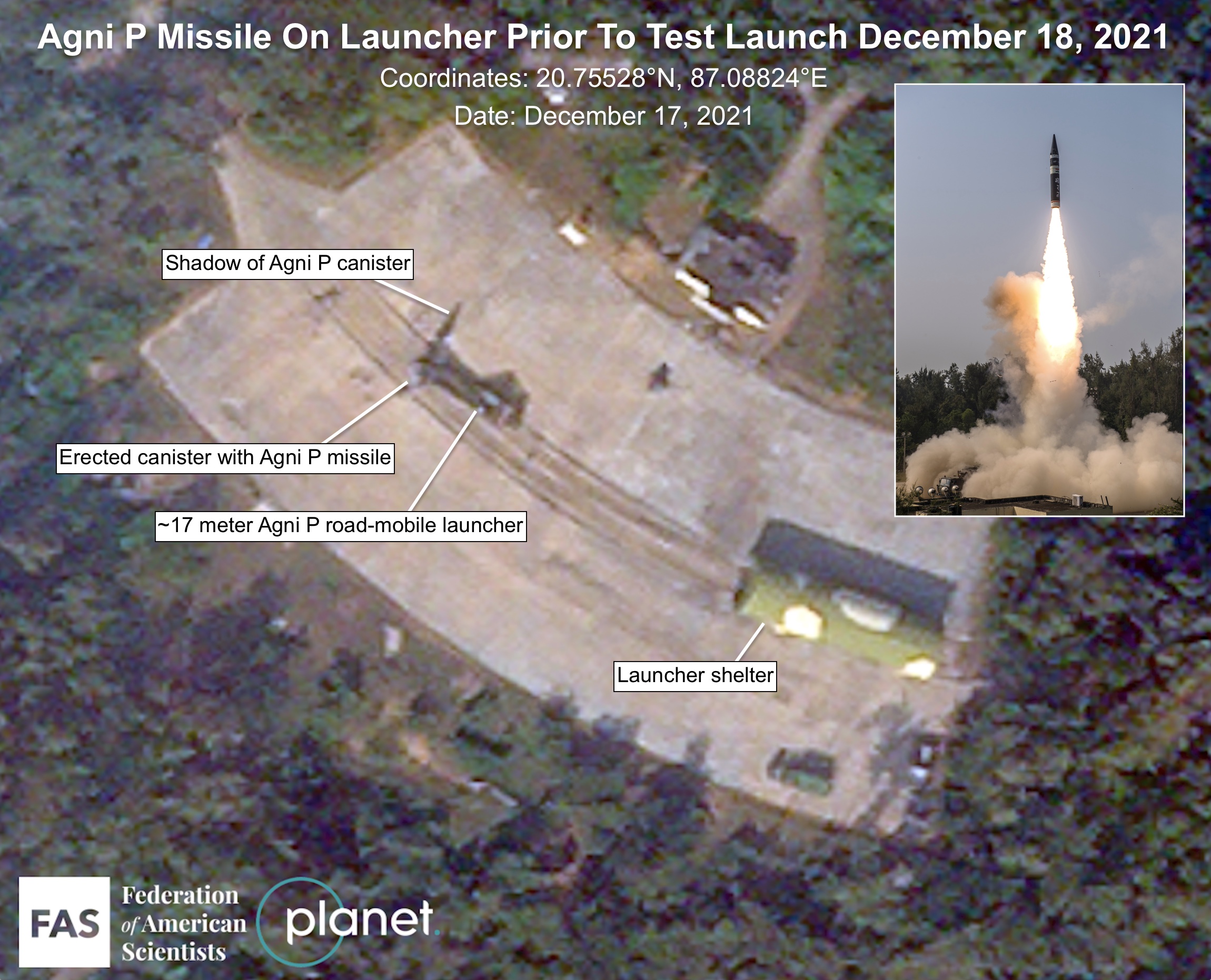 Following both launches of the Agni-P, the Indian Government referred to the missile as a “new generation” nuclear-capable ballistic missile. Back in 2016, when the Defence Research and Development Organisation (DRDO) first announced the development of the Agni-P (which was called the Agni-1P at the time), a senior DRDO official explained why this missile was so special:

“As our ballistic missiles grew in range, our technology grew in sophistication. Now the early, short-range missiles, which incorporate older technologies, will be replaced by missiles with more advanced technologies. Call it backward integration of technology.”

Most notably, the Agni-P also incorporates a new feature seen on India’s new Agni-V intermediate-range ballistic missiles that has the potential to impact strategic stability: canisterization. And the launcher used in the Agni-P launch appears to have increased mobility. There are also unconfirmed rumors that the Agni-P and Agni-V might have the capability to launch multiple warheads.

“Canisterizing” refers to storing missiles inside a sealed, climate-controlled tube to protect them from the outside elements during transportation. In this configuration, the warhead can be permanently mated with the missile instead of having to be installed prior to launch, which would significantly reduce the amount of time needed to launch nuclear weapons in a crisis. This is a new feature of India’s Strategic Forces Command’s increased emphasis on readiness. In recent years, former senior civilian and military officials have reportedly suggested in interviews that “some portion of India’s nuclear force, particularly those weapons and capabilities designed for use against Pakistan, are now kept at a high state of readiness, capable of being operationalized and released within seconds or minutes in a crisis—not hours, as had been assumed.”

If Indian warheads are increasingly mated to their delivery systems, then it would be harder for an adversary to detect when a crisis is about to rise to the nuclear threshold. With separated warheads and delivery systems, the signals involved with mating the two would be more visible in a crisis, and the process itself would take longer. But widespread canisterization with fully armed missiles would shorten warning time. This would likely cause Pakistan to increase the readiness of its missiles as well and shorten its launch procedures––steps that could increase crisis instability and potentially raise the likelihood of nuclear use in a regional crisis. As Vipin Narang and Christopher Clary noted in a 2019 article for International Security, this development “enables India to possibly release a full counterforce strike with few indications to Pakistan that it was coming (a necessary precondition for success). If Pakistan believed that India had a ‘comprehensive first strike’ strategy and with no indication of when a strike was coming, crisis instability would be amplified significantly.”

For years, it was evident that India’s new Agni-V intermediate-range missile (the Indian Ministry of Defense says Agni-V has a range of up to 5,000 kilometers; the US military says the range is over 5,000 kilometers but not ICBM range) would be canisterized; however, the introduction of the shorter-range, canisterized Agni-P suggests that India ultimately intends to incorporate canisterization technology across its suite of land-based nuclear delivery systems, encompassing both shorter- and longer-range missiles. While Agni-V is a new addition to India’s arsenal, Arni-P might be intended––once it becomes operational––to replace India’s older Agni-I and Agni-II systems.

It appears that India is also developing technology to potentially deploy multiple warheads on each missile. There is still uncertainty about how advanced this technology is and whether it would enable independent targeting of each warhead (using multiple independently-targetable reentry vehicles, or MIRVs) or simply multiple payloads against the same target.

The Agni-P test in June 2021 was rumored to have used two maneuverable decoys to simulate a MIRVed payload, with unnamed Indian defense sources suggesting that a functional MIRV capability will take another two years to develop and flight-test. The Indian MOD press release did not mention payloads. It is unclear whether the December 2021 test utilized decoys in a similar manner.

In 2013, the director-general of DRDO noted in an interview that “Our design activity on the development and production of MIRV is at an advanced stage today. We are designing the MIRVs, we are integrating [them] with Agni IV and Agni V missiles.” In October 2021, the Indian Strategic Forces Command conducted its first user trial of the Agni-V in full operational configuration, which was rumored to have tested MIRV technology. The MOD press release did not mention MIRVs.

If India succeeds in developing an operational MIRV capability for its ballistic missiles, it would be able to strike more targets with fewer missiles, thus potentially exacerbating crisis instability with Pakistan. If either country believed that India could potentially conduct a decapitating or significant first strike against Pakistan, a serious crisis could potentially go nuclear with little advance warning. Indian missiles with MIRVs would become more important targets for an adversary to destroy before they could be launched to reduce the damage India could inflict. Additionally, India’s MIRVs might prompt Indian decision-makers to try and preemptively disarm Pakistan in a crisis.

India’s other nuclear adversary, China, has already developed MIRV capability for some of its long-range missiles and is significantly increasing its nuclear arsenal, which might be a factor in India’s pursuit of MIRV technology. A MIRV race between the two countries would have significant implications for nuclear force levels and regional stability. For India, MIRV capability would allow it to more rapidly increase its nuclear stockpile in the future, if it so decided––especially if its plutonium production capability can make use of the unsafeguarded breeder reactors that are currently under construction.

India has long adhered to a nuclear no-first-use (NFU) policy and in 2020 India officially stated that there has been no change in its NFU policy. Moreover, the Agni-V test launch in October 2021 was accompanied by a reaffirmation of a “’credible minimum deterrence’ that underpins the commitment to ‘No First Use’.”

At the same time, however, the pledge to NFU has been caveated, watered-down, and called into question by government statements and recent scholarship. The increased readiness and pursuit of MIRV capability for India’s strategic forces could further complicate India’s adherence to its NFU policy and could potentially cause India’s nuclear adversaries to doubt its NFU policy altogether.

Given that Indian security forces have repeatedly clashed with both Pakistani and Chinese troops during recent border disputes, potentially destabilizing developments in India’s nuclear arsenal should concern all those who want to keep regional tensions below boiling point.

This article was made possible by generous support from the John D. and Catherine T. MacArthur Foundation, the New Land Foundation, the Prospect Hill Foundation, and the Ploughshares Fund. The statements made and views expressed are solely the responsibility of the authors.