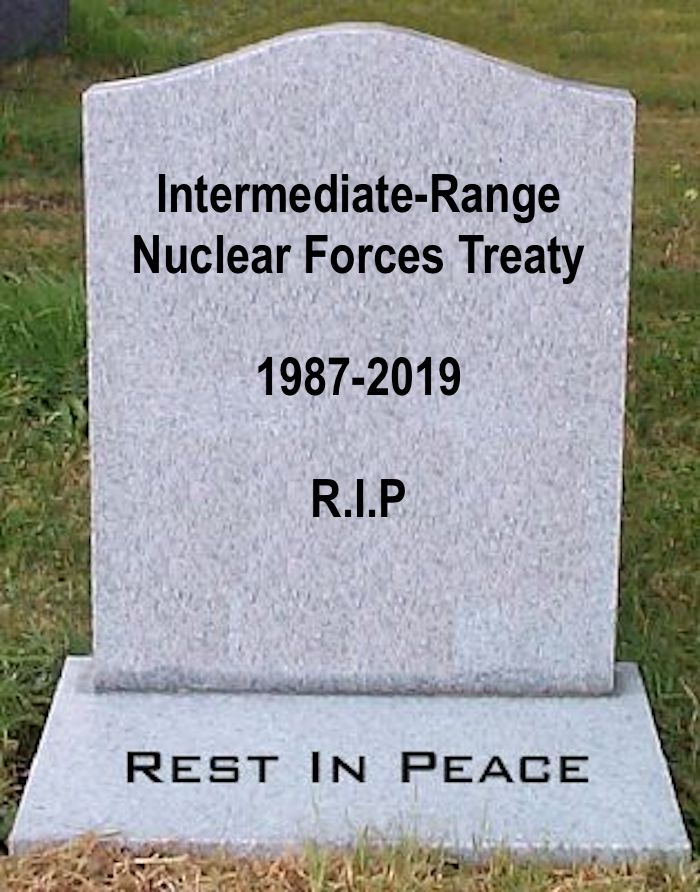 Six months after both the United States and Russia announced suspensions of their respective obligations under the Intermediate-Range Nuclear Forces Treaty (INF), the treaty officially died today.

The Federation of American Scientists strongly condemns the irresponsible acts by the Russian and US administrations that have resulted in the demise of this historic and important agreement.

In a they-did-it statement on the State Department’s web site, Secretary of State Michael Pompeo repeated the accusation that Russia has violated the treaty by testing and deploying a ground-launched cruise missile with a range prohibited by the treaty. “The United States will not remain party [sic] to a treaty that is deliberately violated by Russia,” he said.

By withdrawing from the INF, the Trump administration has surrendered legal and political pressure on Russia to return to compliance. Instead of diplomacy, the administration appears intent on ramping up military pressure by developing its own INF missiles.

Signed in 1987, the INF Treaty dramatically helped reduce nuclear threats and stabilize the arms race for thirty-two years, by banning and eliminating all US and Russian ground-launched missiles with ranges between 500 and 5,500 kilometers––a grand total of 2,692 missiles. And it would have continued to have a moderating effect on US-Russia nuclear tensions indefinitely, if not for the recklessness of both the Putin and Trump administrations.

The United States first publicly accused Russia of violating the treaty in its July 2014 Treaty Compliance Report, stating that Russia had broken its obligation “not to possess, produce, or flight-test a ground-launched cruise missile (GLCM) with a range capability of 500 km to 5,500 km, or to possess or produce launchers of such missiles.” Russia initially denied the US claims, repeating for years that no such missile existed. However, once the United States publicly named the missile as the 9M729––or SSC-8, as NATO calls it––Russia acknowledged its existence but stated that the missile “fully complies with the treaty’s requirements.” Since then, the United States claimed that Russia had flight-tested the 9M729 from fixed and mobile launchers to deceive, and has deployed nearly a hundred missiles across four battalions.

We assess that involves 16 launchers with 64 missiles (plus spares), likely collocated with Iskander SRBM units at Elanskiy, Kapustin Yar (possibly moved to a permanent base by now), Mozdok, and Shuya. It is possible, but unknown, if more battalions have been deployed.

It is possible that Russia made the decision to violate the INF Treaty as early as 2007, when its UN proposal to multilateralize the treaty failed. Although it’s likely that the groundwork was laid even further back. According to Putin, a new arms race truly began in 2002 when the Bush administration withdrew from the Anti-Ballistic Missile Treaty––understood by Putin to be the cornerstone of the US-Russia arms control regime.

For its part, Russia has responded to US accusations with claims that the United States is the true violator of the treaty, stating that US missile defense launchers based in Europe could be repurposed to launch INF-prohibited missiles, among other violations. In a detailed report, the Congressional Research Service has refuted all three accusations.

Regardless of who violated the INF, the Trump administration’s decision to kill the treaty is the wrong move. As we wrote in the Bulletin of the Atomic Scientists when Trump first announced his intention to quit the treaty, withdrawal establishes a false moral equivalency between the United States, who probably isn’t violating the treaty, and Russia, who probably is. It also puts the United States in conflict with its own key policy documents like the Nuclear Posture Review and public statements made last year, which emphasized bringing Russia back into compliance through diplomatic, economic, and military measures.

The bottom line is this: when someone breaks the law, you shouldn’t throw away the law. By doing so, you remove any chance to hold the violator accountable for their actions. If the ultimate goal is to coax or coerce Russia back into compliance with the treaty, then killing the treaty itself obviously won’t achieve that. Instead, it legally frees Russia to deploy even more INF missiles.

The decision to withdraw wasn’t based on long-term strategic thinking but appears to have been based on ideology. It was apparently the product of National Security Advisor John Bolton––a hawkish “serial arms control killer”––having the President’s ear. Defense hawks chimed in with warnings about Chinese INF-range missiles being outside the treaty (which they have always been) and recommendations about deploying new US INF missiles in the Pacific.

Now, we find ourselves on the brink of an era without nuclear arms control whatsoever. With the demise of the INF, the only remaining treaty – the New START treaty – is in jeopardy, a vital treaty that caps the number of strategic nuclear weapons the United States and Russia can deploy and provides important verification and data exchanges. Although it could easily be extended past its February 2021 expiry date with the stroke of a pen, John Bolton maddeningly says that it’s “unlikely.” And Russian officials too have begun raising issues about the extension. Allowing New START to expire would do away with the last vestiges of US-Russia nuclear restraint, and open the world up to a new open-ended nuclear arms race.

Congress must do whatever it can to convince President Trump to extend the New START treaty.