At Engels Air Base, satellite images show one of two bunkers in the weapons storage area has been exposed as part of apparent maintenance of the base’s nuclear weapons mission.

The bunker is one of two earth-covered concrete bunkers at the base, which is home to Russian Tu-160 (Blackjack) and Tu-95 (Bear) long-range bombers. Engels Air Base made international headlines recently when two Tu-160s were deployed from the base to Venezuela in December, as part of the intensifying standoff between the Trump and Maduro governments. Although the bombers themselves are nuclear-capable and are collocated with nuclear weapons bunkers in Russia, it’s a certainty that the two planes deployed to Venezuela carried no such weapons.

Initial work on the bunker appears to have started in 2011 with addition of a tall structure at the eastern entrance. But the work apparently stalled – potentially because of lack of funds – until late-May 2018 when excavation of the bunker itself began. Between 2011 and 2018, the bunker seemed dormant. The second bunker, however, is intact and appears to have been active during this time.

The size of the exposed bunker is approximately 1,800 square meters (19,800 square feet). It consists of two entrances, a main hall for loading, a climate control facility, and what are probably two warhead storage bays. Each bay is about 20×20 meters (60×60 feet), or 400 square meters (1,200 square feet). It is unknown if warheads are stored in shipping containers or mated with the missiles. If mated with missiles, each bay could potentially store 40 missiles for a total capacity of 80 missiles per bunker, or 160 missiles combined in the two bunkers. If warheads are stored in containers, the capacity would be significantly greater.

Like the United States, Russia is thought to store only some of its bomber weapons at the bomber bases while most are kept in central storage facilities. Russia has about a dozen central storage facilities, which are managed by the 12th Main Directorate (GUMO) of the Ministry of Defence. One of them is Saratov-63, located near Berezovka—only 36 kilometers (22 miles) south of Engels. One of the five large underground bunkers at this facility is also being upgraded.

Saratov-63 has a special history. In June 1998, former US STRATCOM commander General Gene Habiger visited the facility and was given access to one of the bunkers. He later described the interior: 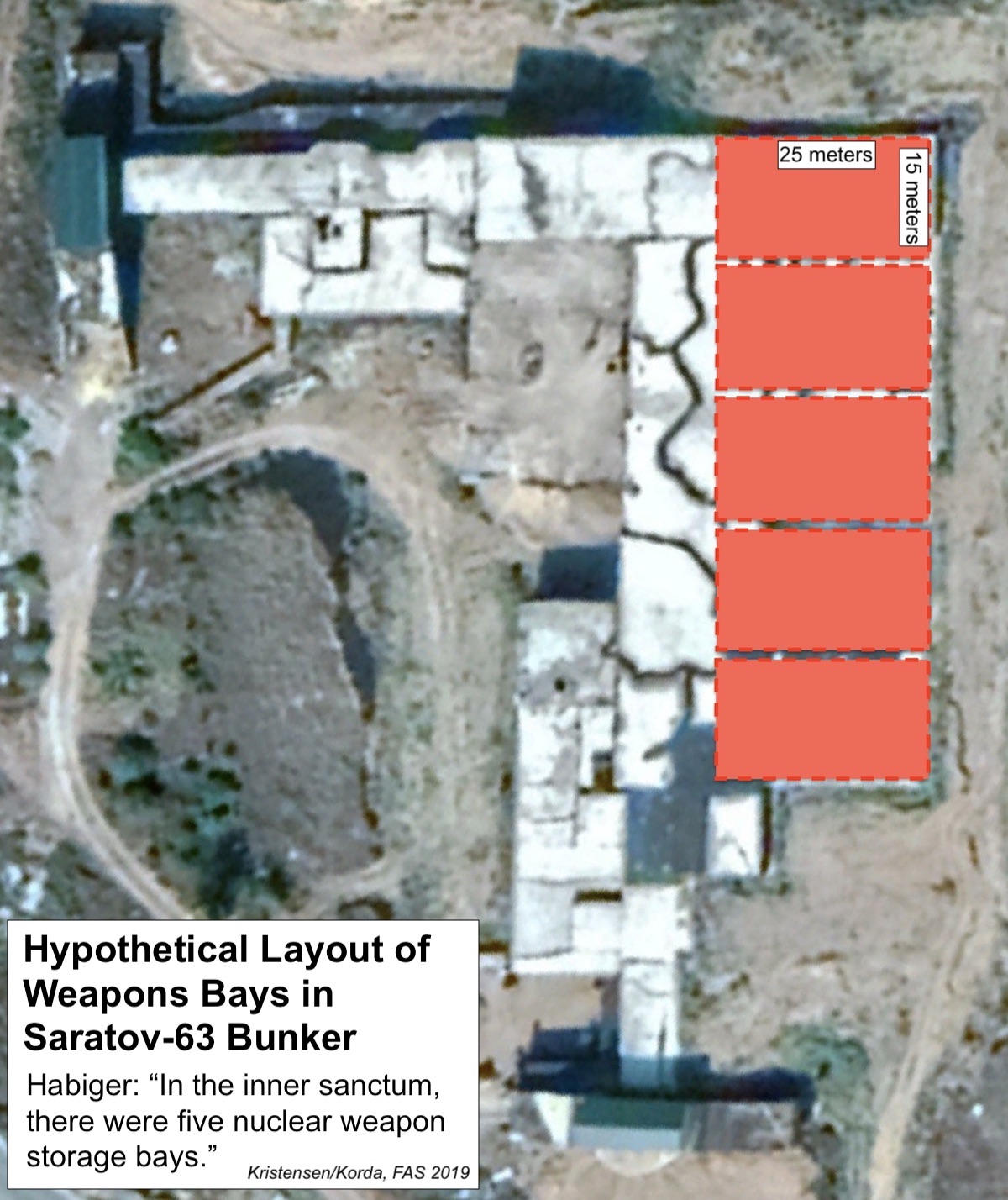 “We went to Saratov, a national nuclear weapons storage site, where I saw not only strategic weapons, but tactical weapons…And they took me into the side of a mountain, a hill, where we went behind two doors that were each several thousands of tons in weight. And you had to open up one door at a time, these sliding, massive doors, in order to get into the inner sanctum. In the inner sanctum, there were five nuclear weapon storage bays. They took me into one of those bays, and we had an interesting discussion.”

The upgrade of nuclear storage bunkers at Engels and Saratov-63 follow upgrades to nuclear bunkers we have described at Kulikovo in the Kaliningrad province and at Vilyuchinsk on the Kamchatka peninsula.

These infrastructure upgrades are part of Russia’s overall nuclear modernization efforts. Both facilities serve central roles in Russia’s nuclear posture, so it’s no surprise that they are being upgraded. Engels Air Base also recently completed major upgrades of runway and tarmac and remains the only Russian air base serving the Air Force’s fleet of Tu-160 strategic bombers (at least 10 are scheduled to complete modernization by the end of 2019).

This publication was made possible by a grant from the Carnegie Corporation of New York, the John D. and Catherine T. MacArthur Foundation, the New Land Foundation, the Ploughshares Fund, and the Prospect Hill Foundation. The statements made and views expressed are solely the responsibility of the authors.