China continues to upgrade bases for mobile nuclear medium-range ballistic missiles. The image above shows one of several new launch pads for DF-21 missile launchers constructed at a base near Jianshui in southern China.

Similar developments can be seen near Qingyang in the Anhui province in eastern China and in the Qinghai and Xinjiang provinces in central China.

This and other developments are part of our latest Nuclear Notebook on Chinese nuclear forces, recently published by the Bulletin of the Atomic Scientists.

In the Nuclear Notebook, Robert Norris and I estimate that China currently has roughly 250 warheads in its nuclear stockpile for delivery by land- and sea-based ballistic missiles, aircraft, and possibly cruise missiles.

This is a slight increase compared with previous years that reflects the introduction of new intercontinental ballistic missiles (ICBMs) and submarine-launched ballistic missiles (SLBMs). China is the only nuclear weapon state party to the Non-Proliferation Treaty that is increasing its nuclear stockpile, which might grow a bit more over as more missiles are fielded over the next decade.

Even so, the Chinese nuclear modernization is very slow, as in the case of the introduction of DF-21 medium-range ballistic missiles (MRBMs) at Jianshui and the apparent (temporary?) leveling out of ICBM deployments; China is clearly not in a hurry to reach parity with the United States or Russia anytime soon (if at all) but instead seems focused on safeguarding its minimum retaliatory nuclear deterrent. Even so, the breadth of Chinese nuclear capabilities is widening with introduction of a class of ballistic missile submarines and cruise missiles that might have nuclear capability. With these come new scenarios and command and controls issues that are not yet apparent or understood.

Several interesting publications have made contributions to the public debate on China’s nuclear force operations and modernization over the past few years. Most valuable has been the work by Mark Stokes at Project 2049, most noticeably his 2010 report on China’s nuclear warhead storage and handling system. Also in 2010, M. Taylor Fravel and Evan Medeiros provided valuable analysis of China’s search for assured retaliation. Retired Russian general Victor Yesin claimed in 2012 that China has 1,300-1,500 nuclear warheads more than assumed by the U.S. intelligence community – a Georgetown University study even imagined 3,000 warheads (we consider these estimates exaggerated; see here and here). And renowned scholars John Lewis and Xue Litai described last year what they view as an increasing complexity of Chinese nuclear war planning.

Since our previous Notebook in 2011, most attention has been on the status of China’s new ballistic missile submarines (SSBN) and Julang-2 SLBM. After a series of technical difficulties, the DOD reported in May 2013 that the JL-2 “appears ready to reach initial operational capability in 2013.”

The range of the JL-2 has been the subject of much speculation, and we are struck by how much the range estimates vary and how much experts and news media continued to use outdated estimates or claim that the missile will be able to target the entire United States from Chinese waters. A review of the various estimates published by U.S. government agencies since 1999 shows estimates spanning from 7,000 km to as much as 12,000 km (see image below), although most hover around 7,200+ km.

The latest range estimates of 7,000+ km (NASIC) to 7,400+ km (DOD) show continued uncertainty within the U.S. Intelligence Community about the JL-2 capability. But both estimates also reaffirm that the missile cannot be used to target the continental United States from Chinese waters. Doing so would require a range of at least 8,400 km – and that would only reach Seattle. To target Washington DC from Chinese waters, the range would have to be at least 11,000 km. With the current range estimate of about 7,200+ km, a JL-2 equipped SSBN would have to sail deep into the Sea of Japan between the island of Hokkaido and Russia’s Primorsky Krai oblast to target Seattle, or venture far into the Pacific northeast of Tokyo. To target Washington DC, the SSBN would have to sail even further and launch from a position between the Aleutian Islands and Hawaii – more than halfway across the Pacific Ocean. Due to the apparent noise level of Chinese missile submarines and the extensive anti-submarine capabilities of the United States, that would indeed be risky sailing in a war.

Sending SSBNs far into dangerous water would be China’s only option to fire missiles directly at the United States if Chinese leaders wanted to avoid shooting across Russian territory (all China’s ICBMs launched at the United States from their current deployment areas would overfly Russia).

A JL-2 equipped SSBN could of course target U.S. territories outside the continental United States, including Alaska and Guam, from Chinese waters. To target Hawaii, and SSBN would have to launch from a position in the Sea of Japan or the Philippine Sea.

All of that just to say that JL-2 – despite what you might hear on the Internet – can not be used to target the continental United States. Instead, it is a regional weapon capable of targeting Alaska, Guam, India and Russia from Chinese waters.

So far three Jin-class SSBNs have been delivered and one or two more are in various stages of construction. By 2020, according to information obtained from ONI, China might operate 4-5 SSBNs (see image below). Now that China has said something about its submarines (see sections below), it would help if it would also say something in its next transparency initiative about how many SSBNs it plans to build. The United States, Russia, France and Britain have all shown their plans and there’s no reasons China cannot do so as well. 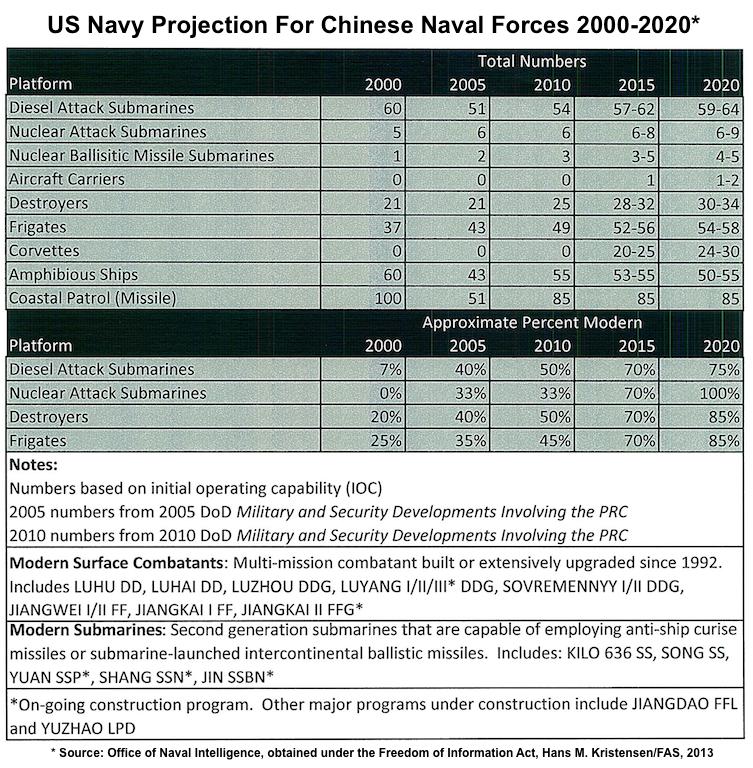 A Washington Times article recently described how many of China’s state-run press outlets have reported that China’s SSBNs “are now on routine strategic patrol,” and quoted the an article concluding that this “means that China for the first time has acquired the strategic deterrence and second strike capability against the United States.”

The first claim – that China’s SSBNs are now on routine strategic patrol – is wrong. Although it has operated an SSBN (the Xia) since the early 1980s, China has never conducted an SSBN deterrent patrol. And since the JL-2 is not yet operational, the SSBNs are certainly not on patrol yet. But even once the JL-2 becomes operational, it is not clear whether China will operate the SSBN fleet in the way other nuclear weapons states operate their SSBNs. For one thing, it seems unlikely that the Chinese leadership would authorize deployment of nuclear weapons onboard SSBNs unless in a crisis situation.

The second claim – that China for the first time has acquired the strategic deterrence and second-strike capability against the United States – is also not correct. China has had a nuclear deterrent and second-strike capability against the continental United States since 1981 when the silo-based DF-5 ICBM became operational. In 2008, that posture of 20 missiles was broadened with the addition of the road-mobile DF-31A ICBM. Even before the JL-2 has become operational, China already has about 40 ICBMs that can target the U.S. mainland.

Once the Jin/JL-2 weapon system becomes operational, China would theoretically be able to conduct SSBN deterrent patrols. But that will not in itself provide a submarine-based strike capability against the continental United States from Chinese waters because of the range limitations described above.

Chinese news media carried several stories (see for example here, here, here) in September about increasing transparency of the submarine force. Despite claims about “revelations,” the articles did not reveal much that wasn’t already known. That said, any official news about the secretive submarine force and its operations is of course better than nothing – and perhaps a new beginning.

What created the most attention in the United States, however, was a map (see figure below) that allegedly showed radioactive fallout over the western part of the country apparently following a Chinese submarine attack with the future JL-2 SLBM. I have not been able to find the original article with the map on Global Times but there were plenty of dramatic spin-offs in U.S. papers suggesting the image showed Chinese plans for a strike on the United States. And some hinted that publication in “state-run media” somehow reflected Chinese government endorsement of the information.

Instead, the map appears on huanqiu.com, a glossy military-techno web site without official government status. And the publication is not an “article” but a series of 30 slides with text below each image by someone who appears to have vacuum-cleaned the much of the information from the Internet – including from some of my publications. Statements made in other news articles by “military experts” Du Wenlong (identified as a senior researcher with the PLA Academy of Military Scientists) and Li Jie (affiliation not identified) do not appear in the slides. The Google translator lists the slides editor’s name as [Shen Then] and the artist that drew the map is identified as Pei Shen.

The map shows three colored regions of radioactive fallout progressively spreading across the United States after 3, 7, and 30 days. One city (Seattle) is identified and 20 other black dots appear to mark locations of major cities. Many are misplaced – and some are odd.

The radioactive fallout patterns on the map are also not very good and appear to be fictive. In reality, radioactive fallout patters are much more narrow, depending on wind and precipitation. In 2006, FAS and NRDC published a report in which we used advanced computer programs to simulate hypothetical Chinese nuclear strikes on the United States. They showed not surprisingly that use of only 20 missiles against American cities would kill tens of millions of people. Back then China only had about 20 DF-5A missiles that could reach the continental United States. But their 20 4-Megaton warheads would cause enormous devastation and extensive radioactive fallout throughout much of the United States (see figure below).

Since then, China has introduced the DF-31A ICBM, each of which carries a smaller (but still significant) warhead. The second simulation we did therefore examined the effect of 20 DF-31A missiles, each with a 250-kiloton warhead. These explosions would also kill tens of millions of people but cause considerably less radioactive fallout (see figure below).

* I’m indebted to Marius Bulla, a 21-year old GIS enthusiast and freelance photographer in Germany, for first bringing my attention to the Apple Maps image of the Jianhui upgrade.