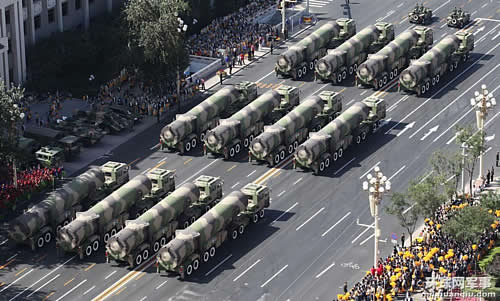 The size of China’s intercontinental ballistic missile (ICBM) force appears to be leveling out instead of increasing.

The force level of 50-75 ICBMs is the same as the U.S. Defense Department reported in 2012 and 2011, slightly up from a medium estimate of 55-65 ICBMs reported in 2010 and rising since the DF-31 and DF-31A first started deploying in 2006-2008. But instead of continuing to increase, the force level estimate has been steady for the past three years at a medium estimate of about 63 ICBMs.

Of the 50-75 ICBMs reported for the past three years, “less than 50” can reach the continental United States, according to DIA. Twenty of those are the silo-based DF-5A. That means that China has deployed fewer than 30 DF-31As, six years after it first started fielding the new missile. DOD stopped providing detailed breakdowns of the Chinese missile force in 2011, but the actual DF-31A number might only be around 20 (2-3 brigades) because the total ICBM estimate also includes DF-4 and DF-31, neither of which can reach the continental United States from their deployment areas in China.

This year’s DIA assessment does not include the prediction from previous years that the number of Chinese ICBMs that can strike the continental United States “probably will more than double…by 2025” to around 100 missiles. This estimate has continued to slide. In 2001 CIA predicted deployment of 75-100 ICBMs “deployed primarily against the United States” by 2015, a prediction that seems in doubt if the the current trend continues.

This year’s DIA threat assessment is also interesting because it doesn’t mention the fabled DF-41, a possible MIRVed ICBM that was rumored to have been test-launched in August 2012. Nor are any of the other new potential launchers identified.

Finally, introduction of China’s new Jin-class SSBN continues to slide; DIA projects the ballistic missile submarine “may reach initial operational capability around 2014,” or four-seven years later than the intelligence community predicted in 2006. Apparently, there have been problems with the Julang-2 missile.

* Note: The designation “DF-3” for the CSS-3 is a typo. It should have been DF-4, for the ageing 5,400-km liquid-fueled ICBM. The DF-3 is an intermediate-range, liquid-fueled ballistic missile that is being retired. Neither the DF-3 nor the DF-21, a more modern medium-range ballistic missile, is mentioned in the testimony.