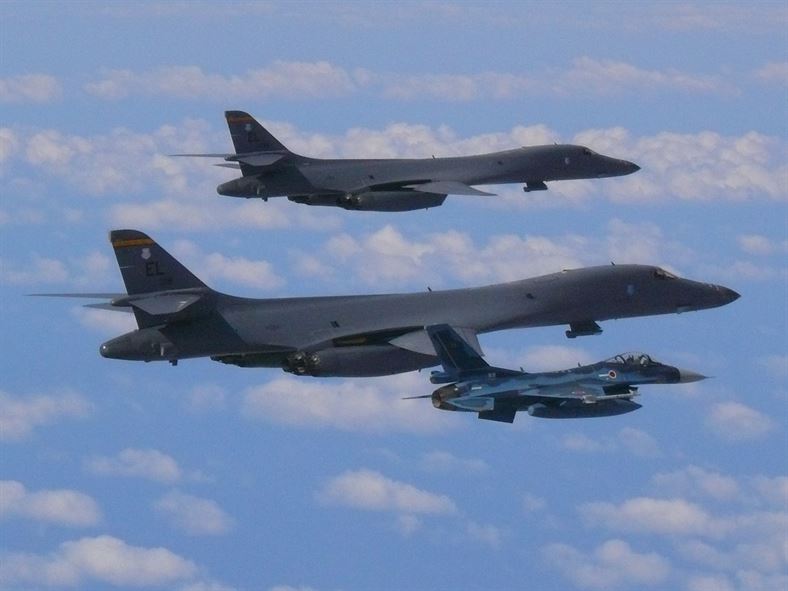 As the Trump administration has prioritized North Korea, it has expanded military exercises around the peninsula to attempt to coerce the regime and assure US allies in Seoul and Tokyo. Perhaps the most dependable signal has been B-1B bombers missions to allied airspace. Though the flights were staged regularly during the Obama administration, they have become more frequent over the last year and more assertive. A review of official press releases and public reporting places this week’s flight of a conventional B-1B bomber near the Korean peninsula as the thirteenth of 2017.

The B-1B bomber originally entered service in 1986 as a supersonic nuclear bomber intended to serve as an interim step between the aging B-52 and the stealthy B-2. The B-1B’s nuclear mission was eliminated in 1994, after which the Air Force did not expend money to maintain its nuclear certification. To meet its obligations under the START treaties, the B-1B was converted to a conventional only platform by welding a metal sleeve onto the aircraft to prevent installation of cruise missile pylons and by removing cable connections in the weapon bays necessary to arm nuclear munitions. As part of New START, Russian observers inspected these modifications in 2011 and accepted the bomber as nonnuclear.

Though effectively nonnuclear, the regional perception of the B-1B is more nuanced. South Korea regularly refers to these flights as demonstrating “strategic assets,” a term usually applied to nuclear-capable platforms. By allowing the term to refer to the intercontinental range of the aircraft in this context, the United States mollifies South Korean officials who desire frequent signals of the US nuclear commitment without devaluing their nuclear signaling options.

Perceptions of the flights are additionally complicated by the fact that North Korea regularly refers to the B-1B as a nuclear platform. For example, North Korea decried this week’s flight a “nuclear strike drill.”  Whether they do so for propaganda purposes or genuinely believe the aircraft is nuclear-capable is not clear, but defense strategists must consider the possibility that Pyongyang perceives a nuclear signal, even if the US officials did not intend to send one. What is clear is that the B-1B flights are of particular concern for Pyongyang. In August, 2017, state propaganda agency KCNA described “the operational plan for making an enveloping fire at the areas around Guam” by firing four Hwasong-12 IRBMs as a way of “containing” B-1B flights. The threat was an early attempt to brandish North Korea’s new long-range missiles in an attempt to coerce the US-South Korea alliance to modify its deterrent posture.

The missions are meant to ensure interoperability with allied forces and reassure allies of US defense commitments. US defense observers now widely doubt that the missions have any deterrent value and have instead become essentially routine signals of assurance to South Korea. North Korea now expects that any major test or provocation will elicit a B-1B flight in response. The assurance value of the flights is also an open question. Though ROK officials appreciate the signal, in the wake of the North Korean ICBM and thermonuclear weapons tests, they have also reportedly sought explicit signals of the US nuclear commitment as well as new conventional military signals. As such, the flights now probably have limited value to the alliance and several observers suggest that they could be modified if North Korea proved willing to negotiate tensions reductions measures.

‘For the first two months of the Trump administration, US Pacific Air Force did not carry out B-1B flights. From March through June, there was one flight per month. Since then, the alliance has conducted two B-1B flights to Korea per month, often in direct response to North Korean missile or nuclear tests. (USAF carried out additional bilateral missions with Japan as well as flights to the South China Sea.)

The most common mission profile has been “sequenced bilateral” missions in which usually two B-1Bs depart Guam, operate with Japan Air Self-Defense Force (JASDF) fighters near Japan (often near Kyushu), then subsequently with Republic of Korea Air Force (ROKAF) fighters. About half the time, the bombers perform a simulated release of munitions or, as in (July, August, and September) release live or inert munitions onto Pilsung range, South Korea.

In September and October, the Air Force has begun to experiment with provocative new mission profiles. On 30 August, the B-1Bs were escorted for the first time by USMC F-35B aircraft from MCAS Iwakuni, Japan. The combination of the stealth fighter with the low-observable bomber will raise new concerns in Pyongyang about the abilities of their air defenses to detect and aerial intrusions. On 23 September, a B-1B mission for the first time flew Northeast of the Demilitarized Zone in international airspace. According to the US Air Force, North Korean air defenses failed to detect the flight, raising additional concerns about their capabilities.

On 11 October, CNN reported that a sequenced bilateral mission had performed a missile release drill in the East Sea (Sea of Japan), following which the B-1Bs and their ROKAF escorts crossed the peninsula and repeated the drill in the West Sea (Yellow Sea). Though B-1B exercises in the West Sea are not unprecedented, they are highly unusual. Additionally, this is the first known report of a missile release drill. The only missiles carried by the B-1B are the standard and extended-range variants of the Joint Air-to-Surface Standoff Munition, a long-range conventional cruise missile. Using the unclassified range of 500 miles, the JASSM-ER is capable of striking Chinese territory from most points in the East Sea and all of the West Sea. Beijing can be struck from the western half of the West Sea without flying north of the DMZ. This fact, combined with the proximity of the flight with US-ROK naval exercises in the West Sea around the time of the landmark Chinese Party Congress, suggests that the flight was an assertive signal not only to Pyongyang but also to Beijing.

Though B-1B sequenced bilateral missions are now essentially routine, several trends raise the risk that these flights could contribute to military escalation.

This year’s B-1B flights occur in a political and military context distinct from previous administration. The Trump administration has through rhetorical comments and assertive military signaling around the peninsula has signaled that they could order military strikes on North Korea. In the last two weeks, the US-ROK combined forces have staged a series of highly provocative exercises ahead of Mr. Trump’s visit to the region (including major live fire naval exercises in the East and West Seas, drills to evacuate US civilians, port visits from American submarines and the USS Ronald Reagan aircraft carrier, and announcements of upcoming deployments of F-35A to Japan and a three-carrier exercise in the Pacific).

Both in exercises and in other announcements, both the United States and South Korea have openly signaled that they are training for decapitation strikes against North Korea’s leadership. The signal is intended to convey to Pyongyang that ordering an attack could place their lives directly at risk and so to deter aggression. Yet, the administration’s rhetorical emphasis on forcible denuclearization of the peninsula may also give the impression that the United States could carry out assassination strikes even absent North Korean aggression. Combined with poor situational awareness of low-observable aircraft, the statements significantly raise North Korea’s incentives to escalate any crisis, the likelihood that they perceive US operations as a prelude to attack, and the risk of nuclear use.

To date, the Trump administration has not conducted a flight of a nuclear-capable B-2 stealth bomber to Korea. In 2013, the Obama administration did carry out a prominent flight from Whiteman AFB, MO to deliver inert munitions at Pilsung, the first and last time a B-2 mission has been disclosed publicly.

However, on 28-29 October, 2017, a B-2 flew from Whiteman to an undisclosed location in the Pacific. The bomber reportedly stopped on Guam, where it swapped crews with the engines running. Though a B-2 flight to Korea is unlikely to be radically destabilizing, in the context of a frequent White House comments playing up the possibility of military action and thinly-veiled nuclear threats to North Korea, planners should be aware that dispatching a B-2 is likely to be significantly more provocative than similar missions in previous years.

In the past, the United States had generally conducted Bomber Assurance and Deterrence (BAAD) flights with B-52 bombers. Because some B-52s are nuclear-capable, these missions were widely interpreted as nuclear deterrent signals. The most recent B-52 flight was in January, 2016, following the fourth DPRK nuclear test. Since 2004, either B-1B, B-52, or B-2 bombers have been rotationally stationed in Guam as part of the “Continuous Bomber Presence” Mission. In 2003, 12 B-52s and 12 B-1B bombers were alerted in the United States and subsequently deployed to Guam after 4 North Korean MiG fighters intercepted an American surveillance plane.

Lastly, the missions may be sending precisely the opposite message from the one intended. For the last several years, the United States has continued to work to improve trilateral coordination between the United States, South Korea, and Japan in order to present North Korea with a united front. However, the sequenced bilateral missions only serve underscore the reticence of the ROKAF and JASDF to operate together. Though JASDF fighters sometimes “hand off” the US bombers to ROK pilots, trilateral missions would send a far stronger signal of cohesion and capability, especially if conducted over ROK airspace.

These considerations raise serious questions about the value of B-1B assurance flights. At a time of rapid advance in North Korea’s nuclear and missile capabilities, with a US leadership that has made statements exacerbating South Korea’s concerns that the United States could decouple from its allies, it is unlikely that routine and symbolic flights are an effective signal either for deterring Pyongyang or assuring Seoul.