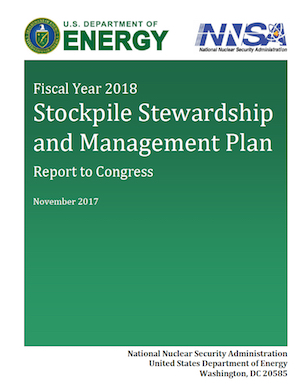 I’ll leave it to others to analyze the infrastructure and fissile material portions and focus on the nuclear weapons life-extension programs (LEPs) and cost estimates.

This year’s plan shows complex LEPs that are making progress but also getting more expensive (some even with funding gaps). There are some surprises (the retirement of the B61-10 tactical bomb), some sloppiness (the stockpile table has not been updated), and some questionable depictions (how to cut stockpile in half with no effect on average warhead age).

Nonetheless, the SSMP is a unique and important document and a service to the public discussion about the scope and management of the nuclear weapons arsenal and infrastructure. NNSA deserves credit for producing and publishing the SSMP. As such, it is a reminder that other nuclear-armed states should also publish factual overviews of their nuclear weapons programs to enable fact-based discussions and counter unsubstantiated rumors and worst-case suspicion.

The report includes a graph that shows the average warhead age in the stockpile over the years. The graph shows the age continued to increase until about 2009, at which point it slowed until leveling out in 2014, presumably because of the significant production of W76-1 warheads (an LEP resets the warhead age to zero). In 2016, the average age began to drop, presumably because of the Obama administration’s 500-warhead cut in 2016 and continued production of the W76-1.

The near-continuous age increase through 2003-2007 is curious, however, because it shows hardly any visible effect from the massive stockpile reduction that occurred in those years. Why did a 50-percent reduction of the stockpile in 2003-2007 not have any effect on the average age of the remaining stockpiled warheads, when a 12-percent reduction in 2016 did? (The reductions in 1992-1994 also had a clear effect on the average warhead age.)

For that to be true, NNSA would have had to retire precisely the same portion of newer and older warheads of each warhead type, which seems odd.

The report reveals that the B61-10 tactical bomb was quietly retired in September 2016. The B61-10 has been in the inactive stockpile since 2006. The retirement is a surprise because the B61-10 is one of four B61 versions NNSA has listed to be consolidated into the B61-12. Once the B61-12 was produced and certified, so the argument was, the older versions would be retired.

Despite the B61-10 retirement, the SSMP’s main table of the current nuclear weapons and associated delivery vehicles still lists the bomb (another table in the report does not list the B61-10).

That table also lists the B-52H as carrying gravity bombs, even though other government documents no longer list gravity bombs assigned to the bomber. The authors appear to have done a sloppy job and simply copied the table from the 2016 SSMP without updating it.

The 2017 SSMP breaks down the extensive nuclear weapons modernization plan:

The 2017 SSMP also reaffirms the commitment to the “3+2” warhead strategy (which actually is a 6+2 strategy) even though the program is too expensive and potentially threatens the US nuclear testing moratorium. The “3” are so-called “interoperable warheads” intended for deployment on the ICBMs and SLBMs. The SSMP describes the Nuclear Weapons Council’s definition of an IW as “an interoperable NEP [Nuclear Explosive Package], with adaptable non-nuclear components on SLBMs and ICBMs.”

But even though “[f]inal designs of NEPs for the IW1, IW2, and IW3 warheads are yet to be determined,” the SSMP nonetheless confidently declares that the “3+2 Strategy preserves confidence in the stockpile’s operational reliability and effectiveness, while mitigating risk and uncertainty.” IW1 production is not expected until 2031, and I bet there are a couple of more design evaluations and decisions before NNSA can make any realistic assessment about reliability and effectiveness.

Moreover, I hear a lot of grumbling in the Navy and Air Force with concerns about introducing significantly modified warhead designs when the existing versions work just fine. Indeed, because the IW designs have not been tested in the assembled configuration envisioned, the 3+2 plan could introduce new uncertainties into the stockpile about warhead reliability and performance.

NNSA’s nuclear weapons budget has increased by 60 percent since 2010, and the agency is hoping for another $1 billion increase in 2018. In anticipation of the new NPR, the 2017 SSMP does not include budget numbers for 2019-2022 (the 2016 SSMP included these out-year numbers). And the detailed cost graph cuts off after 2018, unlike the 2016 SSMP graph that continued through 2021. But NNSA provides a new graph that plots expected weapons activities costs through 2042; there are significant changes compared with the graph included in the 2016 SSMP.

It will take more time to analyze the data but a first impression is that NNSA has reorganized the projected costs so that the bow wave shown in the 2016 SSMP to appear in the 2020s now has been spread out and moved up so that it begins almost immediately and ends in the mid-2020s. Moreover, the graph shows a new high-range estimate cost emerging in the late-2020s and with significantly higher projections through 2042.

As part of that projection, all of NNSA’s LEPs high-end cost estimates appear to have increased, and there are still funding gaps toward the end of some of the programs, a budgeting problem that has previously been pointed out by GAO.

The 2017 SSMP also includes some interesting information about the production complex capacity, not least the planned production of plutonium pits at Los Alamos National Laboratory. Production is scheduled to increase from four pits in 2018 to 10 in 2024, 20 in 2025, 30 in 2026, and build capacity to produce 50-80 pits per year by 2030.

All of this of course hinges on if and how NNSA can complete the construction of the expensive production facilities needed.

The 2017 SSMP concludes that “there is no current requirement to conduct an underground nuclear test to maintain certification of any nuclear warhead.” That is good news. The 1993 Presidential Decision Directive (PDD-15, “Stockpile Stewardship”) directed NNSA to maintain the capability to conduct a nuclear test within 24 to 36 months, just in case a test was needed in the future.

But the 2017 SSMP states that NNSA has changed its assessment of what that guidance means and says “the fundamental approach taken to achieve test readiness has also changed.” Unlike the 2016 SSMP, the 2017 SSMP introduces a much shorter readiness timeline for a simple test:

This reassessment of the test readiness requirement appears to erode the US commitment to the testing moratorium. And it implies that NNSA is anticipating that future and more complex LEPs might potentially require “a simple test” with a nuclear yield. Such a test would be devastating to the international security environment and trigger a wave of nuclear tests in other nuclear-armed states.

For now, warhead development and surveillance rely on subcritical hydrodynamic tests, which are gradually becoming more complex and using more fissile material. The 2017 SSMP describes work is underway to develop an operational “enhanced capability” for subcritical experiments by the mid 2020s.

There were seven “integrated hydrodynamic experiments” conducted in 2016, including for what the SSMP describes as “stockpile options.” These options appear to be different from the known LEPs and stockpile maintenance efforts.

This is not even a Trump SSMP. The document describes the program of record: the maintenance and modernization plan initiated by the Obama administration. Yet in setting the policy framework for the 2017 SSMP, NNSA invokes president Trump’s January 2017 memorandum (NSPM-1) on rebuilding the armed forces to conduct a “new Nuclear Posture Review to ensure that the U.S. nuclear deterrent is modern, robust, flexible, resilient, ready, and appropriately tailored to deter 21st-century threats and reassure our allies.”

This formulation is different and much broader than the requirement listed in the 2016 SSMP, which required NNSA to “maintaining the safety, security, and effectiveness of the nuclear stockpile.”

From NSPM-1, the 2017 SSMP highlight an overall intension “to pursue peace through strength” and “give the President and the Secretary [of Defense] maximum strategic flexibility.”

“Maximum” is a dangerous requirement because it can be used to justify pursuit of all sorts of enhancements for the sake of improved capability. “Sufficient” is a much better word because it forces planners to think about how much is enough and balance this against other realities and requirements.

The Trump administration’s Nuclear Posture Review expected at the turn of the year will mainly be focused on implementing the main elements of the Obama administration’s nuclear modernization program, but it is also considering new weapons and modified warheads.

And the tone describing the international environment will certainly darken. In describing the strategic context, the 2017 SSMP unfortunately makes the usual mistake of lumping Russia in among the countries that are “expanding” their nuclear arsenals. In terms of the total number of launchers and warheads, that is not the case.

NNSA’s nuclear warhead modernization plan forms part of a boarder nuclear modernization plan that is unaffordable as currently designed. The Congressional Budget Office recently presented options for how to reduce the costs. Several of those options include scaling back or canceling warhead programs, options that NNSA should actively consider.

Modifying requirements and scaling back ambitions can have considerable effects on what the Nation gets in return for its investments. Consider for example that the complex $10 billion B61-12 LEP only adds 20 years of life for 480 warheads, while the simpler $4 billion W76-1 LEP adds 30 years of life for 1,600 warheads.

The early retirement of the B61-10, moreover, raises obvious questions about why some of the other “consolidation” versions (B61-3, -4, and -7) cannot also be retired early. Moreover, many B83s currently maintained in the stockpile could probably be retired early as well and dismantled.

While dismantlement is not a priority for NNSA or defense planners who are focused on modernization, it is an important and powerful message to the international community that the United States is not only modernizing but actually also scrapping nuclear weapons. After all, with no new arms control treaty to replace New START (not even negotiations), an INF treaty that is close to collapsing, rejection of the Ban Treaty, and rampant modernization programs underway to extend the nuclear era through the rest of this century, what else do we (and the other P5s) have to show at the nuclear Nonproliferation Treaty review conference in 2020?