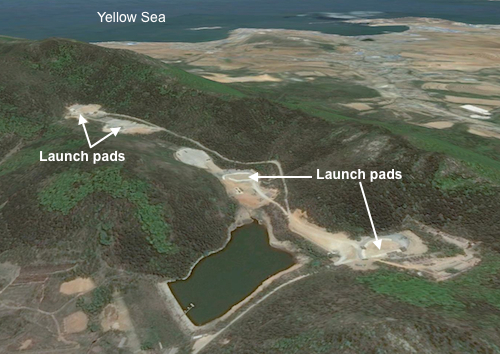 One of the last Chinese Second Artillery brigades with the old liquid-fuel DF-3A intermediate-range nuclear ballistic missile appears to have been upgraded to the newer DF-21 road-mobile, dual-capable, medium-range ballistic missile.

A new satellite image posted on Google Earth from May 4, 2014, reveals major changes to what appears to be a launch unit site for the Dengshahe brigade northeast of Dalian by the Yellow Sea.

The upgrade apparently marks the latest phase in a long and slow conversion of the Dengshahe brigade from the DF-3A to the DF-21.

The 810 Brigade base appears to be located approximately 60 km (36 miles) northeast of Dalian in the Liaoning province (see map below). The base is organized under 51 Base, one of six base headquarters organized under the Second Artillery Corps, the military service that operates the Chinese land-based nuclear and conventional missiles.

The launch unit appears to be using a remote site with four launch pads for training approximately 17 km (10 miles) south of the brigade base. A new commercial satellite image, dated May 4, 2014, and made available by Digital Globe via Google Earth, shows significant upgrades at the site since 2006.

This includes construction of new launch pads that in shape and size appear to match those recently seen at the 807 Brigade base launch unit near Qingyang (Anhui) and the 802 Brigade base at Jianshui (Yunnan).

The satellite image is particularly interesting because it was taken on a day when the launch unit was using the site for a launch training exercise. Three of the four pads are in use with what appears to be DF-21 launchers deployed on the 45-meter paved strip and support vehicles near by. Other vehicles are positioned near the fourth launch pad (see image below).

The relatively poor quality of the high-resolution satellite image makes it hard to positively identify the launchers. But at approximately 14 meters (46 feet) they appear to match the nuclear DF-21 (CSS-5 Mod 1/Mod 2), which has a 10-11 meter (33-36 feet) missile canister on a trailer pulled by the motorized drivers section. The launchers do not appear to be the DF-21C, the conventional version, where the missile canister and drivers section are mounted on the same frame and the tip of the missile canister extends forward over the driver cabin (see here for images of such a unit).

A road-mobile launch unit has a large fingerprint because the launchers need a significant number of different support vehicles and personnel to operate. This includes command and control vehicles, cranes and other repair vehicles, trucks and busses. The Dengshahe launch unit image shows part of the large backup encamped immediately north of the launch pad sites (see image below).

From the launch pads north of Dalian, the DF-21 would able to target all U.S. military bases on the Japanese mainland as well as on Okinawa.

The conversion from the DF-3A to the DF-21 is also reflected in significant reconstruction at the 810 Brigade base. Since 2006, this has included replacement of one of two high-bay garages with what are possibly garages for the DF-21 road-mobile launchers. A second high-bay garage has been significantly modified, and the support vehicle technical area has been upgraded (see image below).