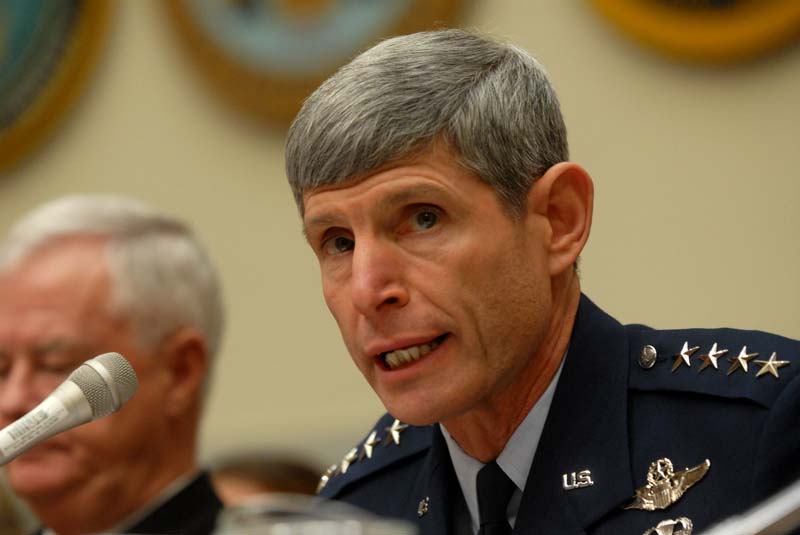 The former U.S. Air Force Chief of Staff, General Norton Schwartz, confirmed last week that the B61-12 nuclear bomb planned by the Obama administration will have improved military capabilities to attack targets with greater accuracy and less radioactive fallout.

The confirmation comes two and a half years after an FAS publication first described the increased accuracy of the B61-12 and its implications for nuclear targeting in general and the deployment of U.S. nuclear weapons in Europe in particular.

In addition to violating the NPR pledge, enhancing the nuclear capability contradicts U.S. and NATO goals of reducing the role of nuclear weapons and could undermine efforts to persuade Russia to reduce its non-strategic nuclear weapons posture.

Confirmation of the enhanced military capability of the B61-12 also complicates the political situation of the NATO allies (Belgium, Germany, Italy, the Netherlands, and Turkey) that currently host U.S. nuclear weapons because the governments will have to explain to their parliaments and public why they would agree to increase the military capability.

General Schwartz’s confirmation came during a conference organized by the Stimson Center in response to a question from Steven Young (video time 49:15) whether the relatively low yield and increased accuracy of the B61-12 in terms of targeting planning would change the way the military thinks about how to use the weapon.

General Schwartz’s answer was both clear and blunt: “Without a doubt. Improved accuracy and lower yield is a desired military capability. Without a question.”

When asked whether that would result in a different target set or just make the existing weapon better, General Schwartz said: “It would have both effects.”

General Schwartz said that the B61 tail kit “has benefits from an employment standpoint that many consider stabilizing.” I later asked him what he meant by that and his reply was that critics (myself included) claim that the increased accuracy and lower yield options could make the B61-12 more attractive to use because of reduced collateral damage and radioactive fallout. But he said he believed that the opposite would be the case; that the enhanced capabilities would enhance deterrence and make use less likely because adversaries would be more convinced that the United States is willing to use nuclear weapons if necessary.

“Nuclear capable aircraft may have many advantages. Accuracy (as compared to other systems) is not one of them,” the Joint Staff argued in 2004 during drafting of the Doctrine for joint Nuclear Operations. Test drops of U.S. nuclear bombs normally achieve an accuracy of 110-170 meters, which is insufficient to hold underground targets at risk except with very large yield. The designated nuclear earth-penetrator (B61-11) has a 400-kiloton warhead to be effective. Therefore, increasing the accuracy of the B61 to enhance targeting and reduce collateral damage are, as General Schwartz put it at the conference, desired military capabilities.

Increasing the accuracy broadens the type of targets that the B61 can be used to attack. The effect is most profound against underground targets that require ground burst and cratering to be damaged by the chock wave. Against a relatively small, heavy, well-designed, underground structure, severe damage is achieved when the target is within 1.25 the radius of the visible crater created by the nuclear detonation. Light damage is achieved at 2.5 radii. For a yield of 50 kt – the estimated maximum yield of the B61-12, the apparent crater radii vary from 30 meters (hard dry rock) to 68 meters (wet soil). Therefore an improvement in accuracy from 100-plus meter CEP (the current estimated accuracy of the B61) down to 30-plus meter CEP (assuming INS guidance for the B61-12) improves the kill probability against these targets significantly by achieving a greater likelihood of cratering the target during a bombing run. Put simply, the increased accuracy essentially puts the CEP inside the crater (see illustration below). 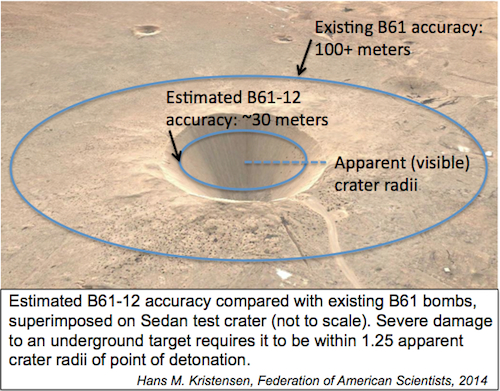 Cratering targets is dirty business because a nuclear detonation on or near the surface kicks up large amounts of radioactive material. With poor accuracy, strike planners would have to choose a relatively high selectable yield to have sufficient confidence that the target would be damaged. The higher the yield, the greater the radioactive fallout.

With the increased accuracy of the B61-12 the strike planners will be able to select a lower yield and still achieve the same (or even better) damage to the underground target. Using lower yields will significantly reduce collateral damage by reducing the radioactive fallout that civilians would be exposed to after an attack. The difference in fallout from a 360-kiloton B61-7 surface burst compared with a B61-12 using a 10-kiloton selective yield option is significant (see map below).

There is to my knowledge no evidence that potential adversaries are counting on being able to get away with using nuclear weapons because the United States is self-deterred. Moreover, all gravity bombs and cruise missiles currently in the U.S. nuclear arsenal have low-yield options. But poor accuracy and collateral damage have limited their potential use to military planners in some scenarios. The improved accuracy of the B61-12 appears at least partly intended to close that gap.

For NATO, the improved accuracy has particularly important implications because the B61-12 is a more effective weapon that the B61-3 and B61-4 currently deployed in Europe.

The United States has never before deployed guided nuclear bombs in Europe but with the increased accuracy of the B61-12 and combined with the future deployment of the F-35A Lightning II stealth fighter-bomber to Europe, it is clear that NATO is up for quite a nuclear facelift.

Initially the old NATO F-16A/B and Tornado PA-200 aircraft that currently serve in the nuclear strike mission will not be able to make use of the increased accuracy of the B61-12, according to U.S. Air Force officials. The reason is that the aircraft computers are not capable of “talking to” the new digital bomb. As a result, the guided tail kit on the B61-12 for Belgian, Dutch, German, Italian and Turkish F-16s and Tornados will initially be “locked” as a “dumb” bomb. Once these countries transition to the F-35 aircraft, however, the enhanced targeting capability will become operational also in these countries.

The Dutch parliament recently approved purchase of the F-35 to replace the F-16, but a resolution adopted by the lower house stated that the F-35 could not have a capability to deliver nuclear weapons. The Dutch government recently rejected the decision saying the Netherlands cannot unilaterally withdraw from the NATO nuclear strike mission.

It is one thing to extend the existing nuclear capabilities in Europe; improving the capabilities, however, appears to go beyond the 2012 Deterrence and Defense Posture Review, which decided that “the Alliance’s nuclear posture currently meets the criteria for an effective deterrence and defense posture.” It is unclear how improving the nuclear posture in Europe will help create the conditions for a world free of nuclear weapons.

Such considerations ought to be well behind us more than two decades after the end of the Cold War but continue to tie down posture planning and political signaling.