Every time India test-launches a new ballistic missile, officials from the defense industry go giddy about the next missile, which they say will be bigger, more accurate, fly longer, and carry more nuclear warheads.

Until now, all Indian ballistic missile types have carried only one warhead each, an important feature that has helped constrain India’s so-called minimum deterrence posture.

But the newest missile, the 5000+ kilometer-range Agni V, had not even completed its second test launch last month, before senior officials from India’s Defense Research and Development Organization (DRDO) declared that the next Agni variant will be equipped to carry multiple warheads.

Moreover, the DRDO chief said that all future missiles will be deployed in large canisters on a road- or rail-mobile launchers to get “drastically” shorter response time with an ability to launch in “just a few minutes.“

It still remains to be seen if these are just the dreams of excited weapons designers or if the Indian government has actually authorized design, development, and deployment of longer-range missiles with multiple warheads and quick-launch capability.

If so, it is bad news for South Asia. The combination of multiple warheads, increased accuracy, and drastically reduced launch time would indicate that India is gradually designing its way of out its so-called minimum deterrence doctrine towards a more capable nuclear posture.

This would almost certainly trigger counter-steps in Pakistan and China, developments that would decrease Indian security. And if China were to deploy multiple warheads on its missiles, it could even impede future reductions of U.S. and Russian nuclear forces.

Indian defense contractors, engineers, analysts and news media reports have for years described efforts to develop multiple-warhead capability for India’s ballistic missiles. Some have even claimed – incorrectly – that some current ballistic missiles are capable of delivering MIRV. A couple of definitions will help:

MRV is relatively simple to deploy but MIRV is a much more complex and expensive technology. News reports and private web sites rarely differentiate between the two but automatically equate multiple warheads with MIRV. Similarly, multiple payloads don’t necessarily mean warheads but can involve penetration aids such as decoys or chaff. MRV might involve 2-3 warheads but 4 or more warheads imply MIRV.

For reasons that are still unclear, Indian defense industry officials have for several years described development of multiple warheads for future Agni variants. In 2007, about a year after Agni III failed its first test launch and before Agni V had even left the launch pad, Avinash Chander, who has since been appointed to head the DRDO, said the next Agni variant would have a range of over 5,000 kilometers and “be a multiple warhead missile with a capacity to carry four to 12 warheads.”

So far that hasn’t happened and DRDO leaders have been unclear about what Agni version would receive the MIRV they are so busy working on. Vijay Kumar Saraswat, for example, made the following statement to NDTV shortly before he retired in May 2013 as DRDO chief:

“Saraswat: Agni Series of missiles are in an advanced stage of production. Today, as you remember, we have completed development of Agni I, Agni II, and Agni III. Agni IV and Agni V are in an advanced stage of development. And this year, you will see two more launches of Agni V, which will culminate its complete developmental activity and it will be led to production. Agni IV is already getting into production mode. So with this – Agni I, Agni II, Agni III, Agni IV, Agni V – getting into production mode, the next logical corollary as far as the long-range ballistic missile deterrents capability of this country is concerned, we will switch over to force multiplication. Force multiplication in the case of ballistic missiles will be by way of multiple independently manouevreable [sic] re-entry vehicles (MIRV).

NDTV: Meaning one missile which can carry many warheads?

Saraswat: Carry multiple warheads. Our design activity on the development and production of MIRV is at an advanced stage today. We are designing the MIRVs, we are integrating it with Agni IV and Agni V missiles, and that would also give us the capability to cover a vast area plus deliver in the event any activity requires a number of payloads at a required place.

NDTV: So will the next test be with a multiple warheads system or…

Saraswat: No. The present task, as I was mentioning, will be only with the normal configuration of Agni V. But there will be an experimental test in which we will be testing the MIRV capability.

NDTV: So that would be what? Agni VI or…

Saraswat: No we are not naming it Agni VI… it will be Agni V missile with MIRVs.

NDTV: So Agni V plus?

Saraswat: You can name is Agni V plus or Agni VI, but certainly it is not Agni VI.

NDTV: It is not Agni VI but Agni V will have multiple warheads so we can have a single missile going and hitting several targets at the same time?

Saraswat: Yes it will be in that category.”

But only three months earlier, Saraswat was quoted by numerous newspapers as explicitly crediting the Agni VI, not the Agni V, with multiple warhead capability: “Agni-V is a major strategic defence weapon. Now, we want to make Agni-VI, which will be a force multiplier.” The new Agni variant “will have force multiplier capability by the MIRV approach which would enable us to deliver many payloads at the same time using only one missile. Work is on in this area and designs have been completed. We are now in the hardware realisation phase,” he said. 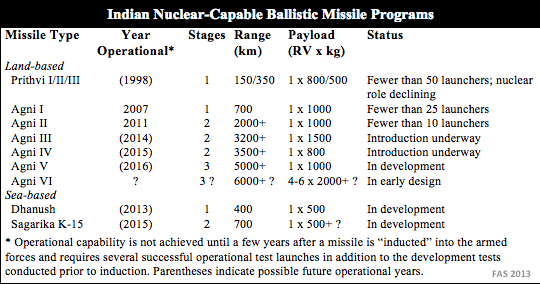 ZeeNews quoted an unnamed “top scientists from DRDO” saying “Agni-VI missiles will carry four or six warheads depending upon their weight.”

Ignore for the moment that none of India’s potential adversaries have missile defense systems that can intercept Indian missiles, DRDO is also working on making the missiles more mobile and quicker to launch by deploying them in “canistered” Transportable Erector Launchers (TEL).

The new canister-launchers “will reduce the reaction time drastically…just a few minutes from ‘stop-to-launch’,” according to Chander. “We are committed to making [the missiles] much more agile, much more fast-reacting, much more stable so that the response can be within minutes,” he said. In an interview with India Today, Chander explained: “In the second strike capability, the most important thing is how fast we can react,” he claimed and said: “All future strategic missiles will be canisterised,” with the first canister Agni V launch scheduled for early 2014.

Contrary to the DRDO chief’s claim, however, “the most important thing” in a second-strike posture is not how fast India can react but simply that it can retaliate. The ability to launch quickly is only relevant for two scenarios: One, if India’s adversaries have military forces that are capable of destroying Indian missile launchers on the ground before they can be used. China faces such a capability from the United States and Russia but neither China nor Pakistan has a capability to conduct a disarming first strike against India’s nuclear forces.

The second scenario where a quick-strike capability could be relevant is if India planned to conduct a first strike against its adversaries, but only if the adversaries were able to detect preparations to strike. But planning for first strike would contradict India’s no-first-use policy.

Nor is a quick-launch capability necessarily “more stable,” as Chander asserts. On the contrary, it could significantly decrease stability both in peacetime – by stimulating Chinese and Pakistani planners to further increase the responsiveness of their nuclear missiles – and in a crisis by shortening decision time and increasing risk of overreaction and escalation.

In addition to increasing warhead loading and responsiveness, DRDO is also working on improving the accuracy of warheads delivered by the missiles, although media reports about “pinpoint accuracy” are probably greatly exaggerated. Even the statement by the Ministry of Defense that the payload from the recent Agni V test reached the target area “within a few meters of accuracy” seems over the top. In contrast, back in 2007 when the Agni V was being designed, Chander said: “We are trying to attain an accuracy level of 100 metres.”

There is probably some overlap with conventional missions (the Agni missiles are dual-capable), but accuracy of 100 meters (300 feet) would bring Agni V well within range of the accuracy of the best U.S. and Russian ballistic missiles (in itself a reason to be skeptical). But their accuracy was pursued in support of highly offensive counterforce strategies designed to target and destroy each other’s ICBM silos, missions that are incompatible with India’s minimum deterrence doctrine.

Statements made by Indian defense officials over the past few years about increasing the payload, responsiveness, and accuracy of nuclear ballistic missiles are worrisome signs that India may be designing its way out of its minimum deterrence posture towards one with more warfighting-like capabilities.

This includes development of multiple-warhead capability to move India’s nuclear missiles beyond “a defense weapon” to “a force multiplier” that can strike more targets with each missile. It includes upgrading launchers to “drastically” shorten the launch-time to “minutes.” And it includes increasing the accuracy of the reentry vehicles to more effectively strike their targets.

Where these requirements come from and who sets them is anyone’s guess, but they demonstrate a need for the Indian government to constrain its weapons designers and more clearly reaffirm its adherence to a minimum deterrence doctrine. Not only does the combination of multiple warheads, increased accuracy, and quick-launch capability challenge the credibility of minimum deterrence. It also sends all the wrong signals about India’s intensions and will almost inevitably trigger weapons developments in the nuclear postures of India’s neighbors – developments that would decrease Indian security and that of the whole region.

India is, to be fair, not alone in taking worrisome nuclear steps in the region. Pakistan is developing short-range nuclear missiles envisioned for tactical use below the strategic level that appears to envision potential use of nuclear weapons sooner in a conflict. China is mixing nuclear and conventional missiles that could trigger misunderstandings in a crisis and researching MIRV capability that may well be motivating Indian planners to follow now rather than catch up later.

Together, India, Pakistan and China have embarked upon extensive nuclear arms development and deployment programs with no apparent or declared end in sight. They seem to be making many of the same decisions (and mistakes) as the United States, Russia, Britain and France did during their Cold War. Now it is necessary to complement the nuclear postures with nuclear arms control measures for the region to constrain the forces.

A first step could be to block deployment of multiple warheads on ballistic missiles to prevent what otherwise appears to be a dangerous new phase of the nuclear arms competition in the region.

For its part, the Indian government should make a pledge not to deploy multiple warheads on its missiles a formal part of its minimum deterrence doctrine. Pakistan could easily join such an initiative.

China should join its southern neighbor in a no-multiple-warhead pledge, which would reaffirm its existing minimum deterrence posture and also help reduce India’s interest in multiple warheads. Moreover, a Chinese pledge not to deploy multiple warheads on its missiles would ease U.S. and Russian concerns about China’s potential to “sprint to parity” and therefore help ease the way for further U.S. and Russian reductions – something that both Beijing and Delhi favor.

All sides would seem to benefit from banning multiple warheads on ballistic missiles and India could take the first and honorable step toward a safer future.

[See also additional descriptions of the nuclear forces of India, China, and Pakistan.]