The first confirmation came in the program How Time Flies on the Dutch National Geographic channel where former prime minister Ruud Lubbers confirmed that there are nuclear weapons at Volkel Air Base. “I would never have thought those silly things would still be there in 2013,” Lubbers said, who was prime minister in 1982-1994. He even mentioned a specific number: 22 bombs.

The second confirmation Lubbers was joined yesterday by another former Dutch prime minister, Dries van Agt, who also confirmed that the weapons are there. “They are there and its crazy they still are,” said va Agt, who was prime minister in 1977-1982.

As readers of this blog are aware (and anyone who have followed this issue over the years), it is not news that the US stores nuclear weapons at Volkel AB. But it is certainly news that two former Dutch prime ministers are now confirming it.

It is not a formal Dutch break with NATO nuclear secrecy norms but it is certainly a big crack in the dike that makes the Dutch government’s continued refusal to confirm or deny nuclear weapons at Volkel AB look rather, well, silly.

The instinct of the bureaucracy will be to ignore the statements to the extent possible and retreat into past policies of neither confirming nor denying the presence of nuclear weapons. But the new situation also presents an opportunity to break with the past and attempt to engage Russia about increasing the transparency of non-strategic nuclear weapons in Europe.

Information about US nuclear weapons at Volkel AB is privileged information that Lubbers and van Agt would have had access to on a highly confidential basis as prime ministers under the bilateral US-Dutch nuclear weapons storage agreement code named Toy Chest (no pun intended).

After leaving office, Lubbers and van Agt would have had to rely on other people with access to such information to be told. A nod would be sufficient to confirm the general presence of weapons, but the specific number would be harder to get. Why Lubbers says 22 is unclear; perhaps that’s the number he recalls from 1994.

Back then, the Clinton administration’s 1994 Nuclear Posture Review decided to retain 480 nuclear bombs in Europe. How many of those were at Volkel AB is unknown, but when President Clinton six years later in December 2000 signed Presidential Decision Directive/NSC-74 that authorized continued deployment of 480 nuclear weapons in Europe, 20 of those were for Volkel AB.

Since then, the United States has unilaterally reduced the stockpile in Europe by nearly 60 percent from 480 to nearly 200 bombs today. Whether the number at Volkel AB has remained the same is unknown. The base has 11 underground storage vaults inside Protective Aircraft Shelters that can house a maximum of 44 bombs (see image). The 22 bombs that Lubbers mentions would imply each vault carries two bombs, but it is probably unlikely that there are more weapons in the Volkel vaults today than in 2000.

Getting basic information about the nuclear weapons at Volkel AB is not the only obstacle to nuclear transparency. Even aerial photos of the base are secret. For example, anyone who has tried to view Volkel AB on Google Earth will know that you can’t; the base has been completed pixel’ed out (see image below). 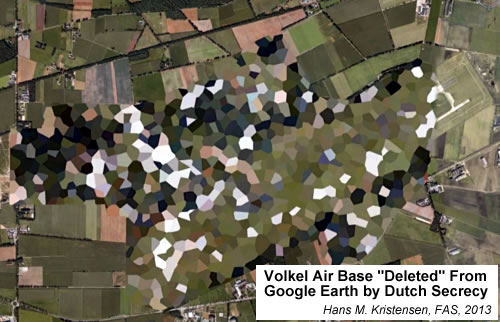 The reason is, the Dutch ministry of defense told me, that an old Dutch law requires that all military and royal (go figure!) facilities be obscured on aerial photos. And because the images covering the Netherlands on Google Earth are supplied by Aerodata International Surveys, a company partly based in Utrecht, the images are sanitized before handed over to Google Earth. It is a pity that a company such as Google lets itself be subjected to silly secrecy by accepting sanitized images on Google Earth.

The law is silly because all national-level adversaries (to Holland) have their own satellite imaging capabilities, so pixel’ing out Volkel AB won’t deny them any information. And anyone else can simply buy high-resolution satellite imagery on the Internet.

To test this point, I went to the web site of AeroGRID, a company partially owned by Aerodata (!). Armed only with a credit card, I was able to purchase a high-resolution image of Volkel Air Base that appeared to show the entire base (see image below).

Problem solved? Not quite. After a closer examination, I discovered that even this “clean” image had also been manipulated, even though AeroGRID never told me that the product I had paid for was actually a fake. Someone had very carefully erased a weapon storage area at the northern part of Volkel AB by overlaying it with trees and farm fields – even inserted forest roads that appear to meet up with dead-end access roads that would otherwise give away that the image had been altered.

Despite these efforts of silly secrecy, I was able to find the secret weapon storage area on another photo that was available on Bing Maps. That photo clearly showed the secret weapons storage area. By overlaying the area from the Bing Maps image onto the AeroGRID image, one can better see the extent of the image manipulation (see image below).

The secret weapons storage area is also visible on a Dutch military base map from 1999 that shows the layout of storage buildings and access roads. Comparison of the map with the Bing Maps image, however, also reveals that the weapons storage loading area has been upgraded significantly (see image below).

This un-redacted image is no longer available on Bing Map, however. Instead, on the new photo that is now available – yes, you guessed it – the weapons storage area has been deleted (see image below).

The confirmation by two former Dutch prime ministers that nuclear weapons are present at Volkel AB is an important contribution to increasing nuclear transparency in Europe. Although it doesn’t tell us something we don’t know, it challenges NATO’s long-standing, outdated, and counterproductive policy of keeping nuclear weapons locations secret. Germany has also confirmed that it hosts nuclear weapons.

Instead of trying to hush things up and continue the secrecy, the Dutch and German governments should together with NATO use the disclosures as an opportunity to reach out to Russia and propose a limited but reciprocal declaration of nuclear weapons storage at Volkel AB, Büchel AB in Germany, and one or two Russian bases. A declaration could be accompanied by verification of the absence of nuclear weapons from one or two bases in each country where nuclear weapons have been removed. Doing so could help jump-start the process of increasing transparency of non-strategic nuclear weapons in Europe, a goal NATO and the Dutch and German governments say they favor. Russia might be interested in exploring such an initiative.

Of course, such a transparency initiative will require the national leadership to twist the arms of the bureaucrats who will oppose any change. But incremental micromanagement of nuclear status quo in Europe will not move the ball forward; it requires political vision and leadership.

Continuing the nuclear secrecy no longer serves a beneficial purpose. The secrecy is not needed for safety or national security; those needs are taken care of by guards, guns, gates, and overall military and political postures. Instead, the secrecy fuels mistrust and rumors that lock NATO and Russia into old mindsets, postures, and relations. The secrecy is also used to chill a public debate that could otherwise result in a demand to withdraw the nuclear weapons from Europe.

One particularly controversial issue that faces the Dutch government and parliament in the next few years is that the B61 bombs at Volkel AB within the next decade are scheduled to be replaced with an improved nuclear bomb that is equipped with a new guidance tail kit that increases the weapon’s accuracy and gives it a standoff capability.

The combination of the new guided standoff B61-12 bomb and the stealthy F-35A Joint Strike Fighter – that the Dutch air force plans to get to replace the F-16 that currently has the nuclear strike mission – will significantly increase the nuclear capability at Volkel AB.

It would be smart for the Dutch parliament to try to get answers to these questions from the government before the new nuclear bombs and stealth bombers start arriving at Volkel AB.