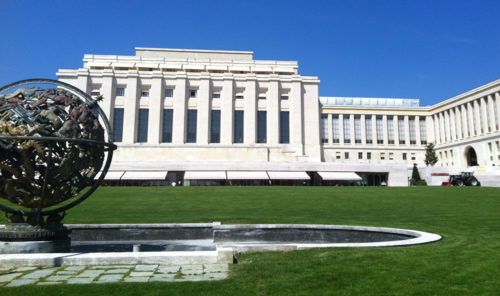 Greetings from Geneva! I’m at the Palais des Nations for the second Preparatory Committee (PREPCOM) meeting for the 2015 Review Conference of the nuclear Non-Proliferation Treaty (NPT). I was invited by the Swiss and New Zealand UN Missions to brief our report Reducing Alert Rates of Nuclear Weapons.

With me on the panel was Richard Garwin, an FAS board member who for more than five decades has advised U.S. governments on nuclear weapons and other issues, and Gareth Evans, former Australian Foreign Minister and now Chancellor of the Australian National University.

The panel was co-chaired by Ambassador H.E. Dell Higgie, the head of the New Zealand UN Mission and Permanent Representative to the United Nations and Conference on Disarmament, and Ambassador Benno Laggner, the head of the Swiss Foreign Ministry’s Division for Security Policy and Ambassador for Nuclear Disarmament and Non-Proliferation. Switzerland and New Zealand have for several years spearheaded efforts in the United Nations to reduce the alert level of nuclear weapons.

I wrote the de-alerting report together with Matthew McKinzie who directs the nuclear program at the Natural Resources Defense Council. Click to download my briefing slides (7.6 MB) and prepared remarks.