With the ink barely dry on the New START Treaty, Jeff Smith at the Center for Public Integrity reports that the Obama administration has determined that the United States can meet its national and international security requirements with 1,000-1,100 deployed strategic nuclear warheads – 450-550 warheads less than planned under the New START Treaty.

The administration is exploring how to get Russian agreement to the reductions without a new treaty, according to the New York Times. That would avoid a new agreement being held hostage to conservative Cold Warriors in Congress who fought ratification of the New START Treaty. Their efforts will be complicated by the fact that the U.S. military (and others) backs the reduced force level.

This is great news that reaffirms the administration’s commitment to continuing reducing excessive nuclear force levels. The fact that the new force level ended up closer to 1,000 than 1,200 warheads continues the 30 percent step-by-step reduction trend of the New START Treaty. The new initiative apparently also seeks reductions of non-deployed and non-strategic nuclear weapons, although it is unclear whether this is part of the first phase of the effort.

The lower force level has the potential to save billions of dollars, but how much depends on how the administration decides to implement it.

The United States could meet the lower force level simply by reducing the warhead loading on ballistic missile submarines but without changing the force structure planned under the New START Treaty (see Table 1, Option 1). This would be a mistake because it would make it hard to convince Russia to join and it would save little money.

A more likely option would be to combine an ICBM reduction with a smaller SLBM download (Table 1, Option 2). That would reduce the ICBM force to 300 missiles and the overall force structure to 600 deployed launchers, or 100 less than under New START. Reducing the ICBM force to 300 from 400 planned under new START – a reduction of 150 from today’s 450 Minuteman III missiles – could be achieved by closing one of the three ICBM bases. A more likely option would be to spread job losses across the force by reducing the number of missile squadrons at each wing from three to two. 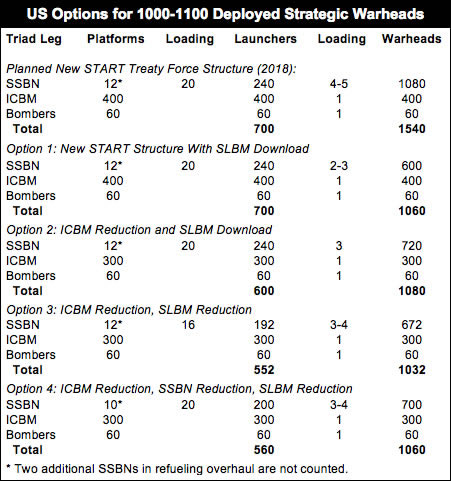 Another option would be to cut the ICBM force to 300 and reduce the missile loading on each SSBN from 20 planned under New START to 16, the same number planned for the next-generation SSBN (Table 1, Option 3). This option would reduce the force structure by nearly 150 deployed launchers below New START limit, thereby limiting the large advantage compared with Russia’s smaller force structure.

Yet another option could be to retire two SSBNs and reduce the ICBM force to 300. This option (Table 1, Option 4) would cancel the expensive refueling overhauls of the USS Wyoming (SSBN-742) and USS Louisiana (SSBN-743), retire the two submarines, and reduce the SSBN force to 12. Only 10 of those would be available for deployment.

How would a reduction to 1,000-1,100 deployed strategic warheads affect Russia’s posture? There are many uncertainties about how Russia’s missile forces will evolve over the next decade, but by the early 2020s the number of deployed missiles might decline to some 350 (down from around 450 today), or significantly less than the 700 permitted by the New START Treaty. So a new treaty would likely have little effect on reducing Russian deployed launchers.

The most important effect of a new limit of 1,000-1,100 deployed strategic warheads would be to reduce the warhead loading on Russia’s ICBMs. This is particularly important because Russia compensates for its smaller missile inventory by deployed more warheads on each missile. Again, the numbers are uncertain, but the lower warhead limit could potentially reduce Russian ICBM warheads by as much as 50 percent from roughly 800 estimated under the New START Treaty to approximately 400 warheads under the new reduced limit (see Table 2).

The only reason Russia would agree to this, it seems, is if the United States significantly reduced its deployed missiles and also reduced the number of warheads kept in reserve as a potential upload capability. The combination of a larger U.S. missile force with a large upload capacity is a significant breakout capability that undermines the changes of reaching a new agreement.

It is double important that a new agreement limits the upload capability because it could otherwise result in Russia also creating a “hedge” of non-deployed strategic warheads. Closing this “reconstitution” loophole in the arms reduction process is important for making nuclear reductions irreversible.

Effect on Role of Nuclear Weapons

We have yet to hear how the new guidance puts and end to Cold War thinking in the way the military is required to plan for the potential use of nuclear weapons. Smith’s article states that the lower deployed warhead level would be achieved by U.S. Strategic Command “targeting fewer, but more important, military or political sites in Russia, China, and several other countries.”

If so, that would appear to refer to what is known as “nodal targeting,” in which planners focus targeting with nuclear forces on the most important facilities rather than holding at risk all facilities within a target category. Nodal targeting has been used for the past two decades to reduce warhead requirements and focus the strategic nuclear war plan on effects rather than on creating rubble.

The current nuclear war plan (OPLAN 8010, Strategic Deterrence and Global Strike [/blog/ssp/2010/02/warplan.php]) is designed to hold at risk nuclear and other weapons of mass destruction (WMD) forces, command and control, military and political leadership, and war supporting industries of six potential adversaries: Russia, China, North Korea, Iran, Syria (a country that might be dropped from the plan soon, if it hasn’t happened already), and a non-state WMD attack.

Focusing nodal targeting more would not necessarily change how nuclear targeting is performed. Nor does a force level itself of 1,000-1,100 deployed strategic warheads suggest that the day-to-day alert level of the forces has been reduced significantly. Indeed, Smith’s story describes that the review considered, but rejected, a proposal by the State Department, National Security Council staff, and Vice President Biden’s staff to consider changing targeting policy more fundamentally:

“A much steeper reduction, to around 500 total warheads, was debated within the administration last year, but rejected, sources said. Known as the “deterrence only” plan, it would have aimed U.S. warheads at a narrower range of targets related to an enemy’s economic capacity and no longer emphasized striking the enemy’s leadership and weaponry in the first wave of an attack. […]

Some officials at the State Department, the NSC staff, and Vice president Biden’s staff urged consideration of the smaller arsenal and new targeting policy, officials said. But ‘a small brake’ was applied by the Joint Chiefs of Staff chairman, Army Gen. Martin E. Dempsey, who worried that making such a major policy change was too risky at a moment of upheaval in conventional military strategy, and would create too much uncertainty among allies, said one of the sources with knowledge of the discussion.”

This appears to refer to a targeting policy similar to the one FAS and NRDC proposed in our 2009 study From Counterforce to Minimal Deterrence as a way of putting an end to Cold War thinking in nuclear planning. President Obama apparently “decided we did not need to do deterrence-only targeting now,” but did not rule it out for later.

Obviously, we have more work to do to put an end to Cold War thinking.