The Pentagon’s new annual report on Chinese military power ignores a recent projection made by the Office of Naval Intelligence that China may be building five new ballistic missile submarines. The projection has since become a public “fact” after being spread around the world by news papers and private web sites.

Several news papers said earlier today – after the DOD report was leaked to them – that it identified the five Jin-class (Type 094) nuclear ballistic missile submarines. One senior defense official even was quoted saying that when the Chinese “develop five vessels like this, they are making a statement.”

Yet the DOD report does not say that China is building five SSBNs. In fact, it doesn’t give any number projection whatsoever. Instead, it repeats the projection from last year’s report that the first new SSBN may become operational sometime before the end of the decade.

So What Did Naval Intelligence Say?

When the news media first reported in March that the Office of Naval Intelligence (ONI) said China is building five Jin-class SSBNs, I requested the ONI report under the Freedom of Information Act. It is always good to check the primary source. The released report consists of answers to eight questions from Seapower Magazine about the Chinese submarine force.

Although some news media described the ONI report as saying China is building five SSBNs, ONI’s language was more vague, saying that “a fleet of probably five TYPE 094 SSBNs will be built in order to provide more redundancy and capacity for a near-continuous at-sea SSBN presence.” To me this language suggested that ONI was making a projection. So I asked ONI if it could clarify whether the number five was an assumption or a fact. In other words, does ONI know that five SSBNs are under construction (or ordered), or was the sentence a projection for what China would have to build if it wanted to have a near-continuous SSBN presence at sea?

The response was: “ONI can neither confirm or [sic] deny that ‘five’ is an actual number.”

So I sent the declassified ONI letter to the Chinese Embassy and asked if they could confirm or deny. Here is what ONI and the media say. Are you building five SSBNs or not? Sorry, came the reply, even if we wanted to help you, no one here even knows the answer to your question.

I guess lack of transparency is a problem on both sides of the Pacific. 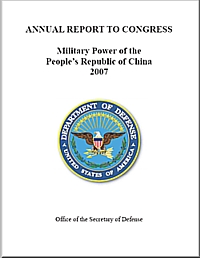 What the DOD Report Says

Perhaps there is disagreement within the intelligence community about the Chinese SSBN program. Perhaps DOD wanted to tone down the report and decided to remove ONI’s number from the final version. ONI said that
“a TYPE 094″ could reach Initial Operating [sic] Capability (IOC) as early as 2008,” but the submarine reaching IOC is not necessarily the same as the weapon system (including the JL-2) becoming operational. The DOD report limits itself to predicting that China’s strategic nuclear forces by 2010 likely include the JL-2.

In stark contrast with previous annual reports, the new report doesn’t highlight cases of dramatic Chinse submarine operations. Earlier this year I reported that Chinese submarines actually don’t sail on very many patrols; The single Xia SSBN not at all. The new DOD report does mention the Song-class submarine that “broached the surface in close proximity” to the U.S. aircraft carrier USS Kitty Hawk in October 2006 “in waters near Japan.” But rather than using the incident to warn about Chinese submarines pushing further and further into the Pacific, DOD uses it to talk about safety, saying it “demonstrated the importance of long-standing U.S. efforts to improve the safety of U.S. and Chinese military air and maritime assets operating near each other.”

Another “almost operational” new weapons system is the long-awaited DF-31, which finally has achieved what the DOD report calls “initial threat availability.” This allegedly occurred in 2006 after more than 20 years in development. DF-31 was first test flown in 1999 and most recently in September 2006. Actual operational capability will likely be achieved in the near future, if it has not already happened, the report states. The DF-31 will probably replace the DF-4 and likely be used for regional targeting against Guam, India and Russia.

A surprising prediction in the DOD report is that the longer-range version of the DF-31 – the DF-31A – may achieve IOC in 2007. This is surprising because there are no authoritative public reports, to my knowledge, that the DF-31A has yet been flight tested. The world has yet to see a picture – even a drawing – of the DF-31A. The missile is expected to supplement and eventually replace 20 old silo-based DF-5As that have been used to target the United States and Russia since the 1980s.

After the 2006 FAS/NRDC report (p. 58) described inconsistent DOD range maps for the DF-5A, the authors of the new DOD report (p. 19) have corrected the map which now shows the DF-5A as having a greater range than the DF-31A. The inaccurate range map became an issue in 2006 because it caused many news media to errouneously report that the new DF-31A will give China the ability to target all of the United States for the first time, although China has had the capability to do so with the DF-5/A since the early 1980s.

The DOD report states that China maintains 40-50 DF-21s, an increase in the projection from the 19-23 missiles reported in 2005 and 19-50 in 2006. The reason for the changed estimate is unknown, but could be due to deployment of more conventional DF-21s. Another possibility is the DF-21’s long-awaited taking over the role of the DF-3A. It may also indicate that the “dip” in DF-21 reported by DOD in 2005 and 2006 in fact never happened.

The build-up of short-range conventional missiles continues off Taiwan, the DOD report says, with about 900 missiles had been deployed by October 2006. With a rate of about 100 missile per year, the number may have increased to approximately 950 by now. Even so, the report observes that things have been relatively quiet in the Taiwan Strait for the past two years.

The DOD report does not give actual numbers for its projection of Chinese nuclear forces. It doesn’t repeat the 2001 CIA projection of 75-100 warheads primarily targeted against the United States by 2015, or mention the earlier DOD projection of 60 ICBMs primarily targeted against the United States by 2010. The new DOD report only lists the types of weapons it expect will make up the Chinese strategic nuclear arsenal by 2010: DF-4, DF-5A, DF-21, DF-31, DF-31A, JL-1, JL-2 and nuclear cruise missiles.

Depending on how many of each of the older weapon types that will remain, and how many of the new types China will actually produce and deploy in the next three years, I carefully estimate that the DOD list for 2010 translates into a Chinese arsenal of some 150-200 deployed nuclear warheads. The intelligence community does not appear to think that any of the new missiles will be equipped with multiple warheads.

The DOD report continues previous years’ assessments of Chinese nuclear policy but now concludes that China’s no-first-use nuclear policy is “ambiguous.” The reason is that Chinese “doctrinal material” includes “additional missions for China’s nuclear forces,” DOD says, such as deterrence of conventional attacks against the Chinese mainland, reinforcing China’s great power status, and increasing its freedom of action by limiting the extent to which others can coerce China. A vigorous Chinese debate about the future role of nuclear weapons, combined with the “introduction of more capable and survivable nuclear systems in greater numbers suggest Beijing may be exploring the implications of China’s evolving force structure, and the new options that force structure may provide,” DOD states.

The DOD report describes many more interesting statements than can be mentioned here, but one is a vague reference to the work FAS and NRDC did in 2006 where we analyzed commercial satellite photos of Chinese military facilities, including the nuclear submarine base at Jianggezhuang. In response to this (and several other cases), the DOD report describes, Chinese authorities warned that “foreigners who illegally survey, gather and publish geographical information on China will be severely punished.” DOD’s assessment of this series of events is that it “may indicate that China is attempting to lay the groundwork to extend the concept of the ‘information blockade’ into space.” Watch out DigitalGlobe; your QuickBird satellite may be next.