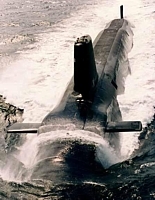 After having spent the last several years sending diplomats to Teheran to try to persuade Iran not to develop nuclear weapons, the British government announced Monday that it plans to renew its own nuclear arsenal.

If approved by the parliament, Monday’s decision means that the United Kingdom will extend its nuclear deterrent beyond 2050, essentially doubling the timeline of its own nuclear era.

Doing so is entirely consistent with the United Kingdom’s international obligations under the Non-Proliferation Treaty (NPT) and with a policy that favors complete elimination of nuclear weapons, the government insisted in a fact sheet, because the British nuclear arsenal today is smaller than during the Cold War, and because the Treaty does not say exactly when nuclear disarmament has to be accomplished. In fact, the new plan has “the right balance,” the government claims, between working for a world free of nuclear weapons and keeping those weapons.

Probably in acknowledgment that it will be a hard sell domestically and internationally, the $40 billion nuclear plan was sweetened with an announcement that Britain will reduce the number of “operationally available warheads” from fewer than 200 today to fewer than 160 at some future date.

The gesture is somewhat hollow, however, because Britain only has enough Trident D5 missiles to arm three of its four SSBNs with a maximum of 144 warheads anyway. The Blair government previously decided in 1998 to purchase only 58 missiles instead of 65. Since then, eight missiles have been used in operational test launches, leaving 50 missiles in the inventory – barely enough to fill the tubes of three SSBNs.

The British government has stated that the single SSBN on patrol at any given time carries “up to 48” warheads, a statement that partly reflects that some of the missiles have been given a “substrategic” mission, probably with only one warhead each. Depending on the number of substrategic mission missiles carried, the actual loading of the patrolling submarine probably is 36-44 warheads. Assuming a similar loading for the other two SSBNs for which there are missiles available, the estimated number of warheads needed for the British SSBN fleet since the substrategic mission first became operational in 1996 is 108-132 warheads.

The announcement to retain “fewer than 160” operationally available warheads seems to reflect this existing reality rather than an additional operational reduction. But it raises the question why the British government for the past eight years has retained 20 percent more warheads than it actually needed.

The plan to replace the submarines comes with a catch: Half-way through their service-life, the missiles will expire, necessitating further investment to purchase new missiles and possibly also new warheads. The U.K. government has already received, the White Paper states, assurance from the U.S. government that Britain can be a partner if the United States later decides to build a successor to the D5 missile, and that such a missile will be compatible, or can be made compatible, with Britain’s new SSBNs.

The type of warhead deployed on Britain’s D5 missiles will last at least into the 2020, according to the White Paper. But the U.K. government says it doesn’t yet know whether the warhead can be “refurbished” to last longer, or whether it will be necessary to develop a replacement warhead. The next Parliament will have to make that decision, the government says, an option that of course will be harder to reject if a decision has already been made to build the new submarines.

Now a U.S. Department of Energy document – declassified after eight years of processing – directly links the warhead designs on U.S. and U.K. Trident missiles. The document shows that the “U.K. Trident System,” as the British warhead modification is called, is similar enough to the U.S. W76 warhead to make up an integral part of the W76 engineering, design and evaluation schedule (see figure below).

The activities listed in the chronology are contained in a detailed database that “maps the requirements and capabilities for replacement subsystem and component modeling development, test, and production to the specific organizations tasked with meeting these requirements.”

The “U.K. Trident System” is thought to consist of a 100-kiloton thermonuclear warhead encased in a cone-shaped U.S. Mark-4 reentry vehicle. The W76 is the most numerous warhead (approximately 3,200) in the U.S. stockpile. Built between 1978 and 1988, about a third of the W76s are being modified as the W76-1 (see figure below) and equipped with a new fuze with ground-burst capability to “enable the W76 to take advantage of the higher accuracy of the D5” against harder targets. Delivery of the first W76-1 is scheduled for 2007 and the last in 2012. The W76 is also the first warhead scheduled to be modified under the proposed Reliable Replacement Warhead program.

The U.K. government presents several specific military and political justifications for why it intends to double Britain’s nuclear era.

Another justification is that North Korea and Iran are pursuing nuclear weapons too, and that some countries might even “sponsor nuclear terrorism from their soil.”

Finally, the world is an uncertain and risky place, the White Paper concludes, and adds that it is “not possible to accurately predict the global security environment over the next 20 to 50 years.”

Those who question that these justifications are sufficient to retain the nuclear deterrent, Prime Minister Tony Blair writes in the foreword of the White Paper, “need to explain why disarmament by the U.K. would help our security.”

The White Paper fails to identify a specific, urgent mission for British nuclear weapons. Instead, the justification to keep them seems like a little of everything: A couple of Cold War leftovers (Russia is still looming on the horizon and China might rise), a little sheep mentality (the other nuclear powers won’t give them up either), a little mission-creep (we might have to use them against proliferators), and a little hype (a role against terrorists). All of this is wrapped in the popular post-Cold War mantra that claims that the world suddenly is very uncertain and impossible to predict. As Prime Minister Tony Blair told the Parliament Monday:

“It is just that, in the final analysis, the risk of giving up something that has been one of the mainstrays of our security since the war [World War II], and moreover doing so when the one certain thing about our world today is its uncertainty, is not a risk I feel we can reasonably take.” The world has changed “beyond recognition,” and “it is precisely because we could not have recognized then, the world we live in now, that it would not be wise to predict the unpredictable in the times to come.”

Of course, it is one thing to argue that Britain needs a nuclear bomb in the basement or a mothballed nuclear production capability just in case. It is quite another to claim that strategic submarines need to continue to hide deep in the oceans much like they did during the Cold War without an urgent threat against the survival of the nation.

That’s for the U.K. Parliament to debate in the next months, followed – presumably – by a decision whether to approve the government’s plan sometime in 2007.