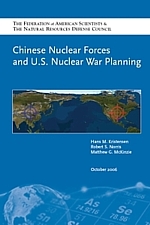 An incipient nuclear arms race is emerging between China and the United States, according to a new report published today by the Federation of American Scientists and the Natural Resources Defense Council.

Both countries are pointing to the other as an excuse to modernize nuclear forces. In the United States the report finds that the Pentagon, the intelligence community, congressional committees, private institutes and the news media frequently overstate Chinese capabilities or present dramatic new developments out of context to underscore a threat.

China, for its part, cloaks its nuclear forces in a veil of secrecy, which creates suspicion and fear in other countries about Chinese intentions.

The report, which is based on analysis of declassified and unclassified U.S. government documents as well as commercial satellite images of Chinese installations, urges both countries to take steps to halt and reverse the tension and military build-up.

The report estimates that China has a stockpile of approximately 200 nuclear warheads, of which roughly 140 are deployed. About 100 of the warheads are for use by ballistic missiles while 40 are bombs for delivery by aircraft.

Given the almost complete lack of information from Chinese authorities about the size and composition of the stockpile, the FAS/NRDC estimate largely builds on analysis of declassified and unclassified assessments produced by U.S. government agencies over the years. Those assessments have been fraught with inaccuracy and inconsistency, the report finds, with a strong predisposition towards making worst-case predictions for stockpile size, weapons range and deployment.

This tendency continues today, and the report takes issue with the core prediction made by the intelligence community that says that the number of Chinese warheads primarily targeted against the continental United States will increase from 20 today to 75-100 warheads by 2015. The prediction assumes 40-55 new DF-31A missiles will be deployed over the next nine years in addition to the DF-31 and JL-2 missiles, a questionable estimate given that the DF-31A has not even been flight tested.

US Nuclear Targeting of China

Through analysis of declassified Pentagon documents, the report finds that U.S. nuclear targeting of China in the past has been considerably more prominent than normally assumed in the public debate. During the 1970s, for example, half of the major nuclear attack options in the U.S. strategic nuclear war plan were aimed at China.

After a hiatus in the 1980s precipitated by a joint U.S.-Chinese stand against the Soviet Union, U.S. nuclear targeting of China has increased after the end of the Cold War. The U.S. navy now bases the majority of its ballistic missile submarines in the Pacific, modernizing their nuclear missiles, and forward-deploying strategic bombers to Guam.

The report also presents the result of number of simulated nuclear strike scenarios between the two countries, showing that both have more than adequate capability to deter each other. The simulations are striking because they show that regardless of whether the strike is an imprecise Chinese “countervalue” attack on cities, or a highly accurate U.S. “counterforce” attack on military facilities, the result would be tens of millions of innocent civilian casualties.

Making use of the unique capabilities of the free Google Earth program, FAS and NRDC have designed a virtual trip of selected nuclear and military facilities in China. Here is how to use it:

1. Download Google Earth onto your computer.
2. Click here or on the link below the map above to download the FAS-NRDC Google Earth file. The program will ask you to either open in Google Earth or download to your hard drive.
3. When Google Earth has finished loading on your computer, make sure the check-box “Chinese Nuclear Forces and U.S. Nuclear War Planning” in the “Places” window to the left is checked to activate the placemarks.
4. Click once on the first placemark (“Chinese Nuclear Forces and U.S. Nuclear War Planning”) to open the text “bubble” with information.
5. If all the placemarks have not opened automatically, click the “plus-box” to the left of the “check-box” in the “Places” window.
6. Those placemarks with an icon that looks like the Google Earth logo or a file-folder contain additional sub-placemarks. Click on the “plus-box” to open each folder. Note that some air bases contain sub-placemarks for each aircraft.
7. Double-click on each consecutive placemark to zoom in on each facility. Don’t forget to use the “tilt” and “rotate” functions of Google Earth to get a better view.
8. The last two folders contain graphic displays of nuclear strike simulations. These simulations are explained in detail in the Chapter 4 of the report (download from here).