In a not very subtle sign of the times, the U.S. Army has produced a deck of playing cards featuring weaponry used or held by Iran in order to familiarize soldiers with Iran’s inventory of weapons and presumably to facilitate their recognition on the battlefield. 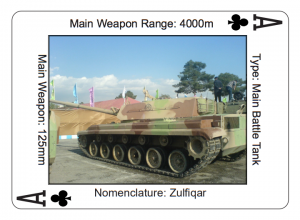