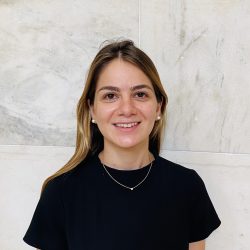 Loully Saney is Chief of Staff for the Day One Project. Prior to joining FAS, she worked as Deputy Press Secretary for U.S. Senator Tim Kaine. As a congressional staffer, she participated in fellowships with the Wilson Center and Hoover Institution at Stanford University focused on foreign and economic policy. While still in college, Loully interned at the White House National Economic Council, Office of Science & Technology Policy, and U.S. Department of State. Loully is a graduate of Princeton University where she studied Politics and received certificates in Near Eastern Studies and History & the Practice of Diplomacy.