Virology Journal article linked to claim that Dr. Fauci knew HCQ is a cure.
A false claim states that in 2005, Dr. Fauci said that hydroxychloroquine is both “a cure and a vaccine” for coronavirus, referencing a 2005-published study. This article showed the effectiveness of chloroquine against classic SARS, SARS-CoV, in vitro (cells grown in culture in a laboratory.) The study was done on a different virus and did not assess the effectiveness of the drug on people.

A One News Now article published on April 27 made the initial claim. On July 28, tweets about this theory spiked, with 9,245 tweets mentioning “Fauci” and “2005” that were shared in a single day. Since then, an average of 4.2K tweets per day have mentioned “Fauci” and “2005”, in an apparent reference to the article. On August 2, an image of this claim appeared on Facebook with the caption “So where has this been hiding for the past 6 months and how did he manage to forget about it?”

Tweets of the OneNewsNow article with the caption “Fauci knew about HCQ in 2005 — nobody needed to die” has been mentioned and reposted in 27K tweets, for a total 131M impressions. Other attacks on Fauci include tweets of a 2017 video where he warns of a future pandemic. The clip in question is in fact sound advice and a warning to be vigilant against infectious disease outbreaks but has been distorted by @DrDavidSamadi, a @newsmax contributor and former @FoxNews Medical A Team member, as well as others to place blame on Fauci. Between July 28 and 30, this tweet had 51M impressions, through the 15K retweets of the original post. 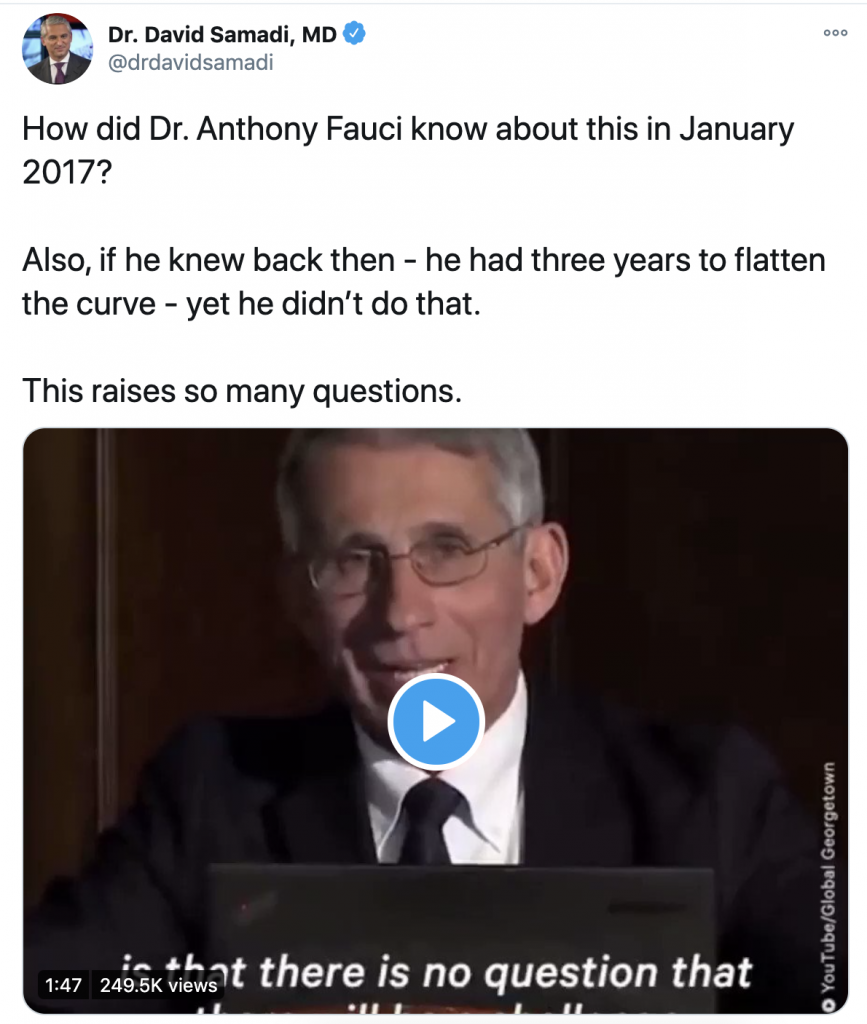 On July 28, Trump retweeted a video, which has since been removed from Twitter, showing America’s Frontline Doctors, a group claiming that masks and shutdowns are not required to end the pandemic. One of the key doctors featured in this video was Dr. Stella Immanuel, who makes the claim that hydroxychloroquine is a “cure for covid.”

One of the highest-reaching tweets referring to “Fraudci”’ shared an excerpt of an interview with Dr. Stella Immanuel. The tweet stated “She said, “I am a sniper for the kingdom of God?!” Nothing is going to stop this woman protected by Army Angels?. To think Dr. Fraudci has known since 05’ that this ladies cure WORKS?! I never thought The Deep State was this EVIL?. Trump 2020?”. The full interview is here. In this interview, she also claims that demons exist.

Amidst other serious and frivolous claims against Fauci, Bill Gates, and other public health-related figures, a hashtag sprung up to serve as a repository for accusations of government mismanagement and Orwellian machinations. The #Scamdemic hashtag first peaked on July 19-20 with 13.5K mentions, coinciding with Fauci attending the Major League Baseball game in Washington, DC. His public appearance gave bad actors an opportunity once again to call COVID-19 a hoax. Accounts like @InformedNJNurse and @Nimmermaximum shared unsourced claims that nurses received positive test results on unused swabs, and that “if they stopped testing, the pandemic would be over.” Turning Point USA founder Charlie Kirk saw 16K retweets on a tweet saying that Fauci attending Opening Day “should outrage every American who’s been told they can’t have in-person sports this year.”

The hashtag peaked again on August 4, with 24K mentions, likely attributable to PragerU personality Candace Owens who tweeted the following: 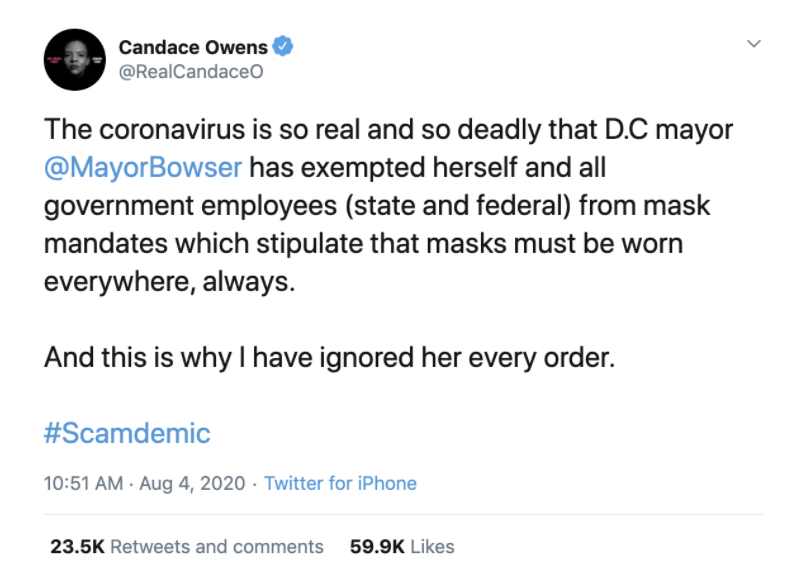 On Tuesday, August 11, Russian President Vladimir Putin announced that Russia’s “Sputnik V” vaccine was registered and approved for distribution. The internet exploded with speculation, with 313K Tweets mentioning “Vaccine” with “Russia” or “Putin.”. The Russian vaccine is controversial because it has not gone through phase III safety and efficacy trials. Twitter accounts, including the liberal @ImpeachmentHour, falsely claimed that the US would buy 100M doses of the Russian vaccine, and other accounts have repeated the false claim, with one user even making a similar claim nearly a week prior to the Russian announcement. Disparate accounts have made similar claims, and while no single tweet has reached virality, the idea is spreading.

The term “Fraudci” reached a peak of 28M impressions on Aug 1 and continues to be used in tweets with disinformation, and referring to the Virology Journal article and America’s Frontline Doctors.

Using open-source investigation techniques, FAS evaluated the volume of social media interactions regarding coronavirus using Twitter posts and digital news articles published between July 27-Aug 11. The breakdown of the following information was primarily focused on results in the United States, but also provided data from other English-speaking contexts, including Australia, Canada and the United Kingdom. FAS analysts evaluated the volume of tweets that emerged over time, the reach of trending tweets, and overall public sentiment. The search term used to identify the highest reaching tweets were (“COVID” OR “virus”, OR “coronavirus”).