Our research shows that the biggest threat to reliable information access for military and DoD service members is expert opinion. A high-level analysis of anti-COVID vaccine narratives on social media reveals that opinions from experts achieve higher relevancy and engagement than opinions from news pundits, even if the news source is considered reliable by its base.

The Department of Defense administers 17 different vaccines for the prevention of infectious diseases among military personnel. These vaccines are distributed upon entering basic training and before deployment. By mid-July, 62% of active duty service members added vaccination against COVID-19 to that array. As impressive as that 62% is, it is not full compliance, and so in late August, Defense Secretary Lloyd Austin ordered service leaders to “impose ambitious timelines for implementation” of a full-court press to vaccinate the entire armed forces.

Some Republican lawmakers, including military veterans, have opted to use policy to fight the military vaccine mandate. Representative Thomas Massie (R-KY) introduced a bill to prohibit federal funds from being used “to force” a member of the USAF to receive a COVID-19, while Representative Mark Green (R-TN) referred repeatedly to a lack of “longitudinal data” of the developed COVID-19 vaccines as the impetus for a bill that would allow unvaccinated servicemembers to be honorably discharged. Green, who is also a board-certified physician, has previously claimed that vaccines cause autism.

Users on Twitter and other social media platforms are looking for advice for themselves or family members in the service about how to navigate the new requirements. Days after Secretary Austin’s memo, a video of a self-proclaimed “tenured Navy surgeon” went viral, where she claims that the COVID-19 vaccine “killed more of our young active duty people than COVID did”, citing the open-source Vaccine Adverse Event Reporting System (VAERS) Database which is unregulated and publicly editable. That doctor, associated with the COVID conspiracy group America’s Frontline Doctors, is one of many influencers who have targeted service members in their battle against vaccination.

On social media, the doctor’s statement took off. A bot network amplified the narrative on Twitter, keeping it at the forefront of the vaccine conversation for weeks. The narrative also gained traction on web forums, where it was cited by soldiers looking for a credible reason to gain an exception to the vaccine mandate. Forums emerged with dozens of service members pointing to the doctor’s statements as fact, and discussing ways to skirt the mandate using religious exemptions, phony immunization cards, or other schemes. The right-wing social media website Gab has created a webpage with templates for users to send to their employers requesting religious exemptions that are being shared throughout military social media circles.

In the below analysis, we take a close look at the 1443 retweets of Dr. Merritt’s video. Assessing the accounts themselves, we see a large influx of accounts created in the last 9 months taking part in the conversation and we see statistically significant declines in the correlations between account behaviors, both of which suggest bot activity. 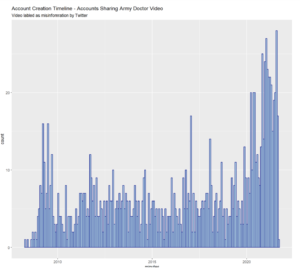 From the 1443 retweets, we find 1319 unique accounts, of which user data was available for 1314 accounts. Three comercial bot detector technologies agreed that 466 of these accounts – 35% – were bots. Two of three detectors found 514 bots in common. Assessing the post behaviors and posted content of these bot accounts, we find disinformation content related to COVID-19, vaccines, vaccine mandates, gun control, immigration, and school shootings in America.

Around the same time, Fox News host Tucker Carlson labeled the vaccine mandate a plot to single out “the sincere Christians in the ranks, the free thinkers, the men with high testosterone levels, and anyone else who doesn’t love Joe Biden, and make them leave immediately.”

Pulling 15,000 random Tweets using key terms focusing on Tucker Carlson’s specific narrative targeting Department of Defense vaccine mandates, we find the Fox News commentator may have stretched the credulity of anti-vax misinformation beyond levels even social media can accept. The conversation was segmented along several sub-narratives. Tweets responding to Tucker Carlson’s assertions that the DoD vaccine mandate was designed to remove high testosterone men from the ranks, the conversation can be seen below.

The first conversational segment, consisting of 4 overlapping topics, is focused on a reaction tweet from MSNBC, arguing that Fox News bears “responsibility for sowing doubt about the vaccine, validating the anti-vaxxers as the pandemic continues.” The response is overwhelmingly positive towards the MSNBC statement, and condemns Fox News and Tucker Carlson. 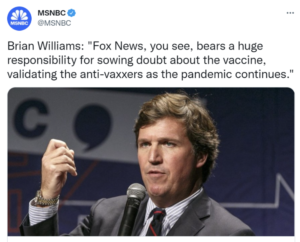 Finally, the third segment of conversation, consisting of two related components, are tweets discussing Tucker Carlson’s previous claims related to COVID vaccines and disbelief in the Pentagon’s association with Satanism.

In assessing the online response to Tucker Carlson’s claims that the Department of Defense is mandating the COVID vaccine to “identify the sincere Christians in the ranks, the free thinkers, the men with high testosterone levels, and anybody else who doesn’t love Joe Biden and make them leave immediately”, we find that the Fox News personality inadvertently consolidated a reactionary conversation online. Instead of contributing to the spread and reach of COVID vaccine misinformation, Carlson’s narrative was met with incredulity, and a near unified condemnation of both Fox News and Carlson himself. Social media users rejected misinformation that the United States military is using vaccine mandates to target “high testosterone” members, and in propagating that narrative Tucker Carlson demonstrates that there is a limit to the believability of lies and conspiracy theories, even on the internet.

But Carlson is not the sole source of disinformation online. Credible or seemingly credible information sources (like expert opinion) are a much more serious threat to service members seeking information about the COVID vaccine than political efforts. Soldiers are doing their research, and it is imperative that DoD (and others) focus on getting more credible expert opinions into the marketplace of ideas so that those narratives can gain traction over these fantastical ones.