(With table corrected for typos) The Pentagon has just released its long-awaited 2020 version of its annual report on China’s military developments. In this article, we review the elements concerning China’s nuclear forces.

The Size of the Warhead Stockpile

The biggest surprise in the new report is that it for the first time provides DOD’s estimate of the number of nuclear warheads in the Chinese nuclear weapons stockpile: low-200s. This is lower than the estimate we currently have: 320. But there are reasons for that.

Second, the DOD estimate listed is for “operational” nuclear warheads (p. 87), which might imply it does not include warheads for weapons that have not yet become operational. The word “operational” was omitted from the introduction and summary sections but is part of the detailed nuclear deterrent section. In contrast, our estimate includes warheads that we assume have already been produced for the DF-41 ICBMs that are being integrated into the missile force, as well as warheads for the JL-2 SLBM that will arm the two additional SSBNs that are fitting out. The DOD estimate probably also does not include dormant bomber weapons. Without those categories, our stockpile estimate as of late-2019 would have been about 215 warheads.

But if the “low-200s” indeed includes every produced warhead, including those presumably produced for the DF-41 and submarines, then there are some unknown and very confusing factors about how China assigns nuclear warheads to its missile forces that need to be explained.

The good news about the lower DOD estimate is that the more-than-doubling of the Chinese stockpile US government statements have projected for the next decade will result in a stockpile of less than 500 warheads instead of over 600. The low stockpile number could potentially take some of the wind out of the sail of the Trump administration’s insistence that China must join arms control talks. And it shows that claims by defense hawks that China may have “many more than 300” warheads is completely false.

Some Trump administration officials have recently suggested that China’s modernization demonstrates that it is striving for “a form of nuclear parity with the United States and Russia.” However, there is no evidence to support this claim.

In comparison, the United States has a stockpile of 3,800 warheads with another 2,000 retired, but still intact warheads, awaiting dismantlement. Moreover, the United States maintains a vast inventory of fissile material sufficient to build thousands of nuclear weapons. 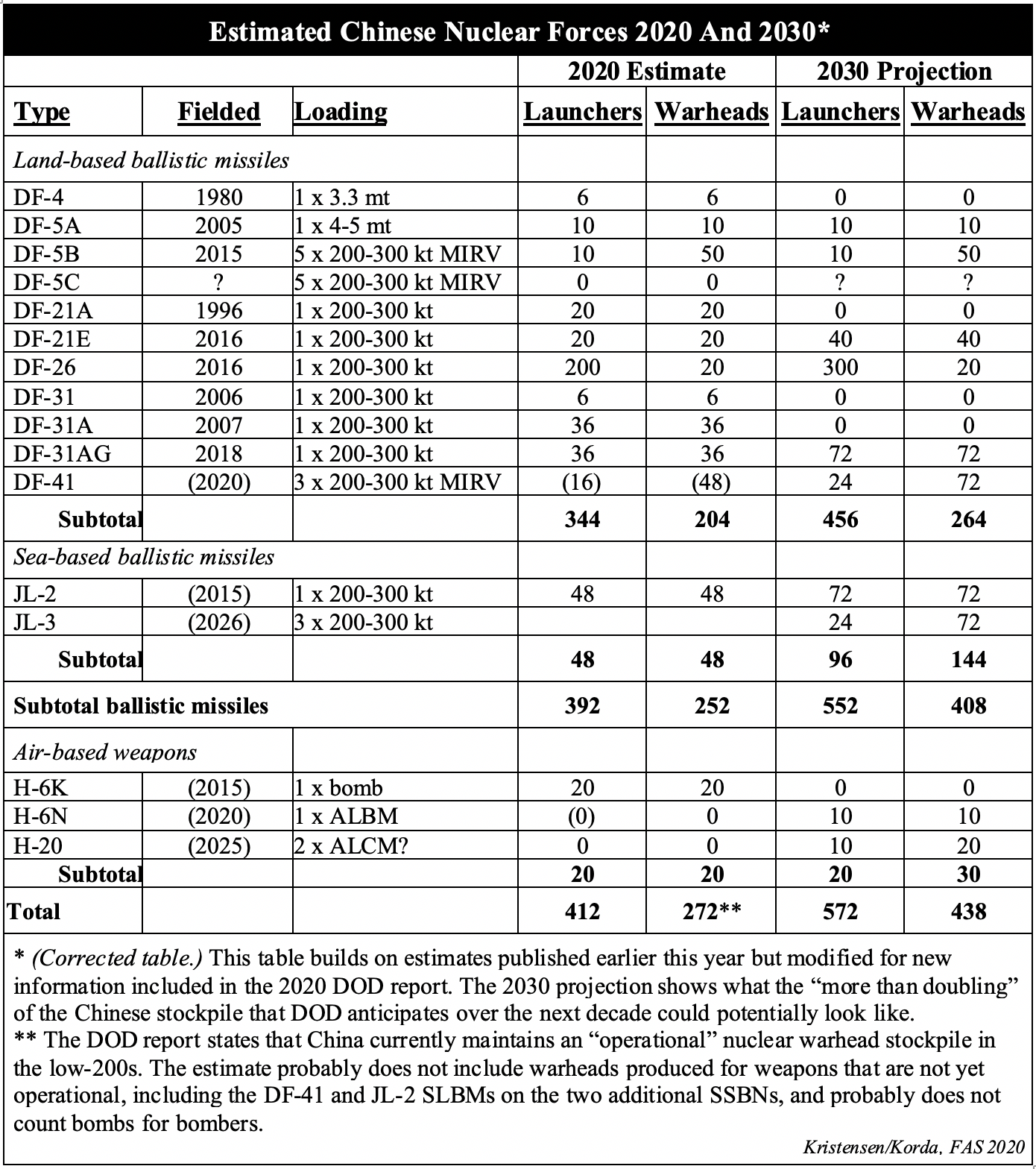 On the ICBMs, the biggest “news” is that the DOD report states that the DF-5B is capable of carrying up to five multiple independently-targetable reentry vehicles (MIRVs), two more than the three MIRVs we have assumed thus far. The single-warhead DF-5A is still deployed, so it is likely that only a portion (probably half) of the silo-based ICBMs have MIRVs. Interestingly, the report lists the range of the MIRV’ed DF-5B as the same as the single-warhead DF-5A that might still be carrying the older multi-megaton warhead. The DOD report also says there are indications that China may be building new DF-5 silos, which might be a vague reference to the construction work described by Scott LaFoy and Decker Eveleth near Sundian (Luanchuan).

The new DF-41 ICBM is still not operational, even though it has appeared in several parades and is visible on satellite images in training areas. The DOD report says fielding is possible in the near term. The DOD report acknowledges (without mentioning FAS directly) our discovery last year of silo construction at the Jilantai training range that might be intended for the DF-41. DOD confirms our assessment saying the site is “probably being used to at least develop a concept of operations for silo basing” of the DF-41 or one of China’s smaller ICBMs. The DF-41 is capable of carrying MIRVs but it remains to be seen whether all or only some will get multiple warheads.

There are no new details on the DF-31AG ICBM, which is replacing the older versions (DF-31 and DF-31A). The DF-31AG appears to carry the same missile as the DF-31A. We estimate there are currently about 78 launchers deployed of the three DF-31 versions.

The old liquid-fueled DF-4 ICBM is still mentioned in the report but is nearing retirement. One indication is that the number of ICBM launchers listed is the same as the number of ICBM missiles, even though the DF-4 previously was listed with one missile reload.

Overall, the DOD report says China now has approximately 100 ICBMs, a significant increase compared with the roughly 40 it deployed in the early-2000s. The US military anticipates the number of ICBMs might increase to about 150 as the DF-41 and more DF-31AGs are fielded (see graph below).

China operates a significant force of IRBMs and MRBMs that include both nuclear and conventional versions. The DOD report says this includes 350 launchers with many more missiles. But it is likely that only a smaller number of these launchers are assigned nuclear warheads. This includes the DF-21, of which two of four versions (DF-21A and DF-21E) are nuclear, and the DF-26, which is dual-capable.

One of the most dramatic developments described in the DOD report is the increase of the DF-26 IRBM force, which the Pentagon says has grown from 16-30 launchers in 2018, to 80 in 2019, and now 200. The majority of the DF-26 launchers serve a conventional mission, including an anti-ship variant, and are probably not assigned nuclear warheads. But a small number of launchers, perhaps fewer than 50, might serve a nuclear role. It is still unclear where all those DF-26 launchers are based; known bases only appear to account for about 100 launchers. 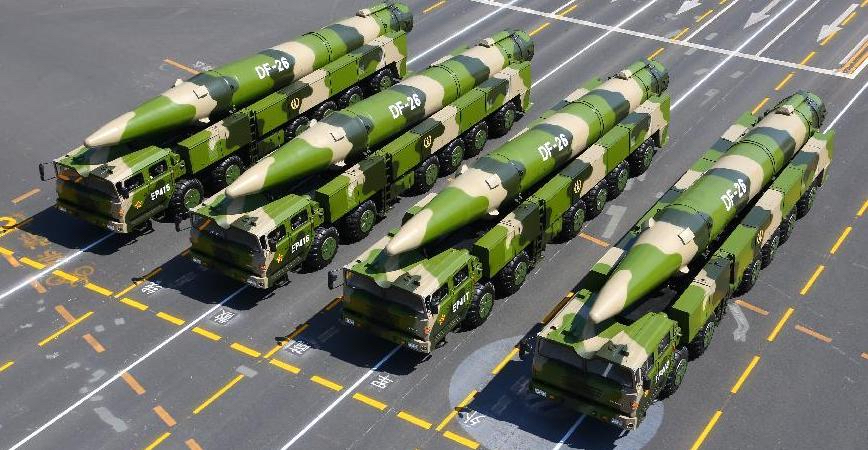 This entanglement of nuclear and conventional capabilities in the Chinese IRBM and MRBM missile force presents a potential complication in a crisis, as it is possible that launch preparations of a conventional missile could be misinterpreted as an impending nuclear launch, thus potentially triggering US preemption. A similar dynamic exists in Southeast Asia, as both India and Pakistan have nuclear and conventional versions of the same types of missiles.

The DF-17 MRBM that reportedly carries a hypersonic glide vehicle is only mentioned in passing in the DOD report. The weapon was displayed at the 2019 parade in Beijing and has been seen training at the Jilantai training range, but there is no information in the report about the status. The DF-17 has been described by official Chinese sources as conventional, by unofficial Chinese sources as dual-capable, and most recently, by the commander of US Strategic Command as a “strategic nuclear system.” Whatever the capability might be, the DF-17 is not yet deployed.

Despite US intelligence reports that China in the 1990s developed a warhead for the DF-15 SRBM, it is believed that today the entirety of China’s large arsenal of short-range ballistic missiles and cruise missiles is armed with conventional warheads. In the Pentagon’s report, the DF-15 is explicitly included within a list of “conventional missile forces.”

China has launched six Jin-class (Type 094) nuclear-powered ballistic missile submarines (SSBNs), of which four are operational. The two additional and slightly modified submarines have been fitting out and may join the fleet soon. All Jin-class SSBNs are based at the Longposan naval base near Yulin on Hainan Island.

Each of China’s SSBNs can carry up to 12 JL-2 SLBMs, each capable of carrying a single warhead. These missiles have sufficient range to target Guam and Alaska without sailing into the Pacific Ocean; however, they could not reach the continental United States unless the submarines sailed deep into Pacific Ocean and were able to avoid the United State’s comprehensive regional anti-submarine architecture.

China is developing a next-generation SSBNs––known as the Type 096––that the DOD report says will carry a new SLBM, which have been described as the JL-3. The new missile will have an extended range that might allow China to target northwestern cities like Seattle without putting its own submarines in danger. Rumors that the JL-3 will have a range of nearly 12,000 kilometers are almost certainly exaggerated; it is more likely the range will be less than 10,000 kilometers. Another question is whether the JL-3 will be capable of carrying MIRV; the DOD report does not say anything about the future capability.

The DOD report says the Type-096 will likely begin construction in the early-2020s and could initially operate alongside the Jin-class SSBNs and result in a fleet of up to eight SSBNs by 2030.

After the prominent role bombers played in Chinese nuclear tests in the 1960s and 1970s, as well as the display of nuclear bombs at Chinese museums, we have long assumed that the Chinese stockpile included a small number of bombs (no more than 20) for a secondary contingency mission, but that the bombers were not assigned an active nuclear role.

That role appears to be increasing with DOD’s report that the PLAF has been “reassigned” a nuclear mission. The DOD report states that “PRC officials have identified both the H-6N and China’s future strategic stealth bomber as dual-capable delivery platforms.” The H-6N has a modified fuselage that could carry the two air-launched ballistic missiles (ALBMs) that China is developing, one of which DOD says “may include a nuclear payload” and is known as the CH-AS-X-13.

The DOD report repeats previous claims that the conditions for China’s no-first-use policy are dubious. But also reaffirms that there is no sign that Chinese leaders have changed the policy.

Yet the DOD report claims that the scope of China’s nuclear modernization and its lack of transparency “raise concern that China is not only shifting its requirements for what constitutes a minimal deterrent, but that it could shift away from its longstanding minimalist force posture.” Neither China, nor any of the other nuclear-armed states that have claimed to have a minimal deterrent, have ever defined the size or capability of such a posture. Nor does the DOD report define what the limit is, but ties the potential shift as: “The anticipated changes to the capacity, capability, and readiness of China’s nuclear forces in the coming years seem likely to outpace potential developments by any adversary that could plausibly threaten China’s ability to retaliate against a first strike.”

One of these emerging capabilities is a Launch-On-Warning (LOW) posture. The DOD report claims there is “increasing evidence” that China is moving towards this posture for at least a portion of its force. As evidence for this, the report lists the construction of new silos coupled with space- and ground-based early-warning capabilities that would be needed to support a LOW posture. This is circumstantial evidence, however, as China has deployed silo-based DF-5s for decades and potentially could maintain its current strategy even with new silos and improved early-warning.

A LOW posture would require mating warheads to missiles. We have long assumed that nuclear warheads are not mated on ballistic missiles under normal circumstances and the DOD report reaffirms this by stating that “China almost certainly keeps the majority of its nuclear force on a peacetime status – with separated launchers, missiles, and warheads…” However, the report also claims that PLARF brigades conduct “combat readiness duty” and “high alert duty” that DOD says this “apparently includes assigning a missile battalion to be ready to launch, and rotating to standby positions as much a monthly for unspecified periods of time.” It is not entirely clear from this description that it implies a battalion on such duty would have warheads installed on the missiles –– it could potentially imply that everything else was ready and that the warhead is stored nearby so that it could be mated very quickly if necessary.

We will publish a more detailed analysis in the next Nuclear Notebook in the Bulletin of the Atomic Scientists later this Fall.