At the same time the White House is finishing a review of nuclear weapons policy, U.S. Strategic Command has quietly put into effect a new strategic nuclear war plan.

The new plan, which entered into effect in July 2012, is called OPLAN 8010-12 Strategic Deterrence and Force Employment. It replaces an earlier plan from 2008, that was revised in 2009.

A copy of the front page of OPLAN 8010-12 was obtained from U.S. Strategic Command (STRATCOM) under the Freedom of Information Act.

OPLAN 8010-12 is the first strategic nuclear war plan update made since the Obama administration’s Nuclear Posture Review in 2010. The administration has completed another review of nuclear targeting policy but not yet issued new presidential guidance, so the new war plan probably does not incorporate changes resulting from the review.

Details of OPLAN 8010-12 are highly classified and it is yet unclear why a new plan has been issued at this point instead of awaiting the results of the administration’s targeting review. Minor adjustments are made to war plans all the time but new plan numbers are thought to reflect more significant changes.

Plan updates can be triggered by several factors: changes in the adversaries that are targeted by the plan; changes to the U.S. nuclear force structure (introduction, modification, or retirement of nuclear weapon systems); or promulgation of new military or political guidance. Since the previous plan change in 2009, several important developments have occurred that could potentially have triggered production of OPLAN 8010-12 (see table). 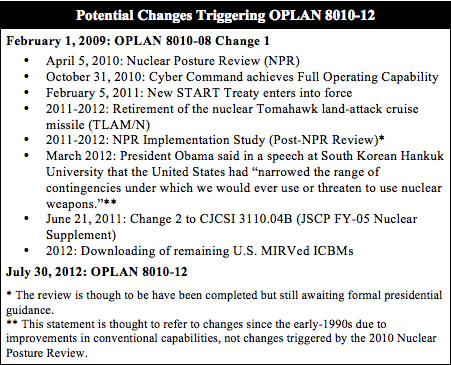 The formal reason for the new plan was probably the update of the Nuclear Supplement to the Joint Strategic Capabilities Plan (CJCSI 3110.04B) that was issued by the Chairman of the Joint Chiefs of Staff in June 2011. The document, known as JSCP-N (formerly Annex C), provides nuclear planning guidance to combatant commanders in accordance with the Policy Guidance for the Employment of Nuclear Weapons (NUWEP) issued by the Secretary of Defense. This probably eliminates strike scenarios involving the recently retired nuclear Tomahawk land-attack cruise missile (TLAM/N).

Over the same time period, the number of Russian ICBMs declined by approximately 80 missiles, most of them silo-based SS-18 and SS-19 missiles, a change that potentially would allow a reduction of at least 160 warheads from the U.S. war plan.

OPLAN 8010-12 is the nuclear combat employment portion (known as SIOP during the Cold War) of a wider plan also known as OPLAN 8010 (but without the update year). OPLAN 8010 is a “base plan” with annexes, one of which is OPLAN 8010-12. The annexes consist of plans for different elements of national power that span the entire spetrum of STRATCOM missions: nuclear forces; conventional strike options; non-kinetic (incuding cyber operaitons); misssile defense; intelligence, surveillance and reconnaisance; and counter-WMD.

The base plan (OPLAN 8010) is thought to be directed against six potential adversaries: Russia, China, North Korea, Iran, Syria, and WMD attacks by non-state actors.

OPLAN 8010-12 is produced, maintained, and – if so ordered by the president – executed by the Joint Functional Component Command for Global Strike (JFCC-GS), a 430-people unit located at STRATCOM at Offutt Air Force Base in Nebraska. JFCC-GS is responsible for not only nuclear plans but for the full spectrum of kinetic (nuclear and conventional) and non-kinetic effects.

Three names in five years indicate a plan in evolution. The frequent name changes probably reflect an ongoing search for a name that more accurately captures the essense of the plan. Global Strike might have caused confusion with the non-nuclear Prompt Global Strike mission.

As mentioned above, the Obama administration has completed an internal review of U.S. nuclear targeting policy, but has yet to issue formal presidential guidance to the military for how this will affect future revisions of OPLAN 8010-12. Yet indications are that important changes might be forthcoming.

While defense hawks lament the administration’s intension to reduce U.S. (and Russian) nuclear forces, the military has already concluded that nuclear forces can be reduced without undermining national or extended deterrence commitments:

Underpinning these decisions is that only small nuclear forces are needed for contingencies against regional adversaries such as North Korea and Iran, which can better be addressed with conventional forces. But even against Russia (and increasingly China), which continues to dominate U.S. nuclear planning, the Pentagon and the Intelligence Community have concluded that “a disarming first strike [against the United States] will most likely not occurr,” and that Russia would “not be able to achieve a militarily significant advantage by any plausible expansion of its strategic nuclear forces, even in a cheating or break-out scenario under the New START Treaty…”

These changes have allowed reductions of nuclear forces and strike scenarios in the past, leaving a stockpile of roughly 4,650 warheads. But although very different from the SIOP, OPLAN 8010-12 is still thought to be focused on nuclear warfighting scenarios using a Cold War-like Triad of nuclear forces on high alert to hold at risk and, if necessary, hunt down and destroy nuclear (and to a smaller extent chemical and biological) forces, command and control facilities, military and national leadership, and war supporting infrastructure in a myriad of tailored strike scenarios.

In Prague four years ago, President Obama said: “To put an end to Cold War thinking, we will reduce the role of nuclear weapons in our national security…” Doing so takes more than trimming limited scenarios against small regional adversaries but changing the core mission against Russia and China.

So when President Obama signs his new Presidential Policy Directive in the near future, it is important that it directs the military to change OPLAN 8010-12 in such a way that it actually puts an end to Cold War thinking. This will be his last chance to do so.