By Ivanka Barzashka and Ivan Oelrich 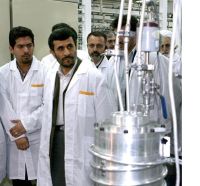 rancor. April 9 marks the day when Iran claimed to have enriched its first batch of uranium in 2006. Yesterday, Ahmadinejad inaugurated Iran’s Fuel Manufacturing Plant (FMP) at Isfahan and announced the installation of a new “more accurate” type of centrifuge at the Fuel Enrichment Plant (FEP) at Natanz.

A fuel fabrication facility, the last element of the front-end fuel cycle, is where nuclear reactor fuel is made. For light water reactors (LWR), such as the one in Bushehr, uranium is mined, turned into yellow cake, and converted to uranium hexafluoride (UF6), the UF6 is enriched using centrifuges, converted into uranium oxide pellets, and made into fuel rods, which go into the reactor core. For pressurized heavy water reactors (PHWR), such as the one in Arak, uranium doesn’t need to be enriched, so the yellow cake is directly converted to uranium oxide pellets.

Fuel fabrication is not nearly the technical challenge of building and operating a cascade of centrifuges, but it is not trivial either. No one wants a multi-billion dollar reactor contaminated because a fuel element has failed, so quality control is vital. Fuel rods must not rupture or corrode while in the reactor, which requires careful control of the purity of materials and integrity of seals.

Iran has claimed that its uranium enrichment program is meant for energy production and is wholly peaceful, while much of the rest of the world has worried that the centrifuges in Natanz are really intended to produce highly enriched uranium (HEU) for a nuclear weapon. The Iranians claim that they need to enrich their own uranium because, based on past experience, they cannot depend on foreign suppliers. The argument of energy independence rang hollow because Iran did not have a fuel fabrication facility. This meant that their indigenously enriched uranium would still have to be exported for fabrication into fuel elements and re-imported, leaving them still vulnerable to foreign pressure. If they now have an operational fabrication facility, they will complete the front-end nuclear fuel production, making their energy independence arguments for enrichment more plausible, or at least less implausible.

Although, it is not news that the FMP, whose construction began in 2004, is operational (this was announced in the February 2009 IAEA report), the advent of a fuel fabrication facility itself is significant. Only three countries, one tenth of those possessing nuclear power plants, have all the elements of the nuclear fuel cycle: from uranium mines to reactor fuel manufacture. It so happens, that all three countries also posses nuclear weapons. When Iran’s nuclear reactor is operational, Iran will have independent control of all the elements of the nuclear fuel cycle, thereby advancing their claim for energy independence.

According to the February IAEA report, after an inspection at FMP, the IAEA inspectors concluded that “the process line for the production of natural uranium pellets for the heavy water reactor fuel had been completed and fuel rods were being produced” [emphasis added]. Because neither the IAEA nor Iran has previously mentioned FMP’s LWR-fuel-producing capability, we are skeptical about what the plant can actually do. We suspect it is more likely that Iran, known for exaggerating its nuclear capabilities, means that the plant could potentially produce fuel for a LWR. 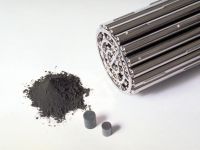 stacked and covered with clad zircalloy (zirconium, coated with iron and other trace elements). However, the geometry and construction of the fuel element assemblies is very different (personal communication from Ehud Greenspan, a nuclear engineering professor at UC Berkley). A HWR has much simpler fuel assemblies than those of a LWR. The PWR rods have a larger diameter, are shorter, and have a thinner coating of metal. [pp 241-291] Because of their size, LWR fuel rods have to be free standing and have a greater power density. LWR fuel production also requires greater attention to criticality dangers.[pp 33-39] All bundles in a HWR are identical, they do not have different uranium concentration like those in the LWR, which can range anywhere from 3 to 5 percent LEU and are arranged in special patterns optimize the neutron flux throughout the core.

In short, the principles and technology of fuel manufacture for both LWR and PHWR are close, but the fuel rod design is very different. So, if Iran had the technological capacity to do one, they could very well do both. But can this happen at the same facility?

India is the only country that produces nuclear fuel for both its LWR (BWR) reactor and its PHWR at the same location – the Nuclear Fuel Complex in Hyderabad. India imports its enriched uranium. Although zirconium production plants are the same for both fuel types, the conversion of raw material (in one case natural uranium and in the other enriched uranium) to UO2 pellets is done in two separate facilities. The fuel rods are also assembled at two distinct locations within the complex: the Ceramic Fuel Fabrication Plant and the Enriched Uranium Fuel Plant.

Moreover, the Russian-built light water reactor in Bushehr, whose construction was completed this year and will soon be in operation, uses Russian-made fuel rods. Iran and Russia have signed a long-term agreement for fuel supply and it is unlikely that Iran would risk damaging the VVER-426 reactor with domestically manufactured fuel rods, especially when it does not have the design plans, which Russia is not going to offer up. So, Iranian theoretical LWR fuel manufacturing capacity will at best have to wait for the construction of another nuclear reactor, at least ten years from now.

According to the Nuclear Energy Agency, if a county wants to be independent from foreign nuclear fuel vendors in a fairly short time, a heavy water reactor is the way to go. It is cheap and simple: uranium does not have to be enriched, natural uranium is easily converted to uranium oxide, the design is simple and the fuel rods are all the same. It requires only a small factory and has lower labor costs. In addition, a PWR can be designed to have a continuous fueling system so it does not have to be shut down to be refueled. Countries with moderate technological capabilities like South Korea, Argentina, and Romania have national heavy water fuel fabrication facilities. So, it is understandable why Iran would think this approach is attractive.

Yet Iranian motives are still not clear cut.

On one hand, the inauguration of a fuel fabrication facility is good news. This means that Iran really is trying to produce reactor fuel and this brings legitimacy to their enrichment claim. Moreover, a fuel fabrication plant in itself has no dual use if viewed a separate part of the fuel cycle. Scott Kemp from Princeton mentioned not too long ago that if Iran converted its UF6 to UO2, this would act as a safeguard. If Iran started the fuel fabrication process for a LWR, turned most of the LEU stockpiled at Natanz into uranium oxide pellets and locked it away in zircalloy tubes, this would greatly reduce the possibility of batch recycling the LEU to bomb-grade uranium.

This post was last updated on 30 September 2009 due to a factual error in the number of countries possessing all the components of the fuel cycle. Only the US, Russia and China currently have all the elements – France shut down its last uranium mine in 2001 and India has only a test enrichment plant and actually imports its enriched uranium.