The New START Treaty Keeps Nuclear Arsenals In Check And President Trump Must Act To Preserve It
For Forbes, Hans Kristensen and Matt Korda make the case for an extension to New START. “Without the treaty, US and Russian nuclear posture planning will be thrown into an era of unpredictability, with grave consequences for both strategic stability and the expensive nuclear modernization programs that both countries currently have underway.”

North Korea Says It Conducted ‘Very Important Test’ at Missile Launch Site
“After a year packed with short-range missile tests, the regime stands on the verge of resuming its full testing program,” Adam Mount tells the Wall Street Journal. “In recent years the regime has not been shy about signaling upcoming advancements in its missile program.”

The Trump-Kim Bromance Is Over
In his latest for the New Republic, Ankit Panda writes “The North Koreans are done talking to the Trump administration and are determined now to take a familiar, hard-line path, focusing on building up their nuclear program to seek leverage for the inevitable next round of negotiations with Washington—under a new president, perhaps.”

JASON Science Advisory Panel Preserved
In his latest Secrecy News blog posts, Steven Aftergood covers the preservation of the JASON scientific advisory group, an NDAA provision requiring the Pentagon to meet its obligation to declassify records, and a Congressional mandate for the Pentagon to publish a report on Chinese, Russian, and American nuclear systems.

Bolstering Congress’ science and technology policy capability addressed during House Science Committee hearing
Check out the Congressional Science Policy Initiative’s readout following a House Science, Space, and Technology Committee hearing on the potential of a new Office of Technology Assessment. “At the hearing, there was broad agreement among the witnesses that Congress’ insufficient absorptive capacity must be addressed.” 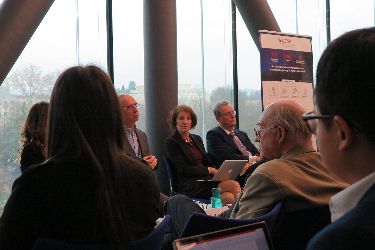 Jenifer Mackby presented a critique of London University’s Strategic Concept for Removal of Arms and Proliferation at panel at the Geneva Center for Security Policy on December 11.