Any time a US federal agency proposes a major action that “has the potential to cause significant effects on the natural or human environment,” they must complete an Environmental Impact Statement, or EIS. An EIS typically addresses potential disruptions to water supplies, transportation, socioeconomics, geology, air quality, and other factors in great detail––meaning that one can usually learn a lot about the scale and scope of a federal program by examining its Environmental Impact Statement.

What does all this have to do with nuclear weapons, you ask?

Well, given that the Air Force’s current plan to modernize its intercontinental ballistic missile force involves upgrading hundreds of underground and aboveground facilities, it appears that these actions have been deemed sufficiently “disruptive” to trigger the production of an EIS.

To that end, the Air Force recently issued a Notice of Intent to begin the EIS process for its Ground-Based Strategic Deterrent (GBSD) program––the official name of the ICBM replacement program. Usually, this notice is coupled with the announcement of open public hearings, where locals can register questions or complaints with the scope of the program. These hearings can be influential; in the early 1980s, tremendous public opposition during the EIS hearings in Nevada and Utah ultimately contributed to the cancellation of the mobile MX missile concept. Unfortunately, in-person EIS hearings for the GBSD have been cancelled due to the ongoing Covid-19 pandemic; however, they’ve been replaced with something that might be even better.

The Air Force has substituted its in-person meetings for an uncharacteristically helpful and well-designed website––gbsdeis.com––where people can go to submit comments for EIS consideration (before November 13th!). But aside from the website being just a place for civic engagement and cute animal photos, it is also a wonderful repository for juicy––and sometimes new––details about the GBSD program itself. 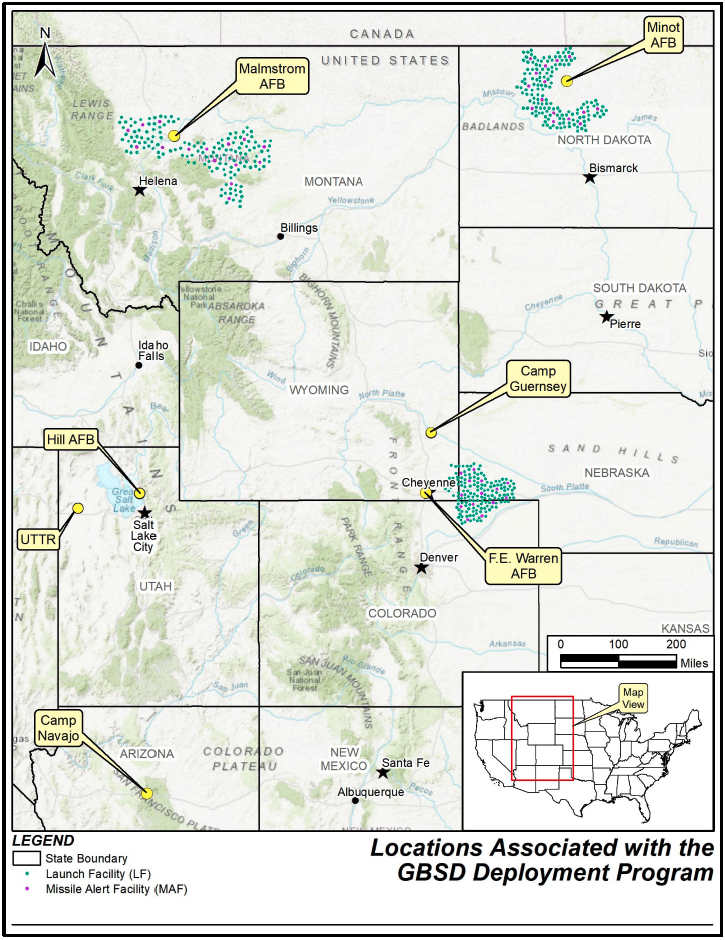 Taking a closer look at these overviews offers some expanded details about where, when, and for how long GBSD-related construction will be taking place at each location.

For example, previous reporting seemed to indicate that all 450 Minuteman Launch Facilities (which contain the silos themselves) and “up to 45” Missile Alert Facilities (each of which consists of a buried and hardened Launch Control Center and associated above- or below-ground support buildings) would need to be upgraded to accommodate the GBSD. However, the GBSD EIS documents now seem to indicate that while all 450 Launch Facilities will be upgraded as expected, only eight of the 15 Missile Alert Facilities (MAF) per missile field would be “made like new,” while the remainder would be “dismantled and the real property would be disposed of.”

Currently, each Missile Alert Facility is responsible for a group of 10 Launch Facilities; however, the decision to only upgrade eight MAFs per wing––while dismantling the rest––could indicate that each MAF could be responsible for up to 18 or 19 separate Launch Facilities once GBSD becomes operational. If this is true, then this near-doubling of each MAF’s responsibilities could have implications for the future vulnerability of the ICBM force’s command and control systems.

The GBSD EIS website also offers a prospective construction timeline for these proposed upgrades. The website notes that it will take seven months to modernize each Launch Facility, and 12 months to modernize each Missile Alert Facility. Once construction begins, which could be as early as 2023, the Air Force has a very tight schedule in order to fully deploy the GBSD by 2036: they have to finish converting one Launch Facility per week for nine years. It is expected that construction and deployment will begin at F.E. Warren between 2023 and 2031, followed by Malmstrom between 2025 and 2033, and finally Minot between 2027 and 2036.

Although it is still unclear exactly what the new Missile Alert Facilities and Launch Facilities will look like, the EIS documents helpfully offer some glimpses of the GBSD-related construction that will take place at each of the three Air Force bases over the coming years.

In addition to the temporary workforce housing camps and construction staging areas that will be established for each missile wing, each base is expected to receive several new training, storage, and maintenance facilities. With a single exception––the construction of a new reentry system and reentry vehicle maintenance facility at Minot––all of the new facilities will be built outside of the existing Weapons Storage Areas, likely because these areas are expected to be replaced as well. As we reported in September, construction has already begun at F.E. Warren on a new underground Weapons Generation Facility to replace the existing Weapons Storage Area, and it is expected that similar upgrades are planned for the other ICBM bases. 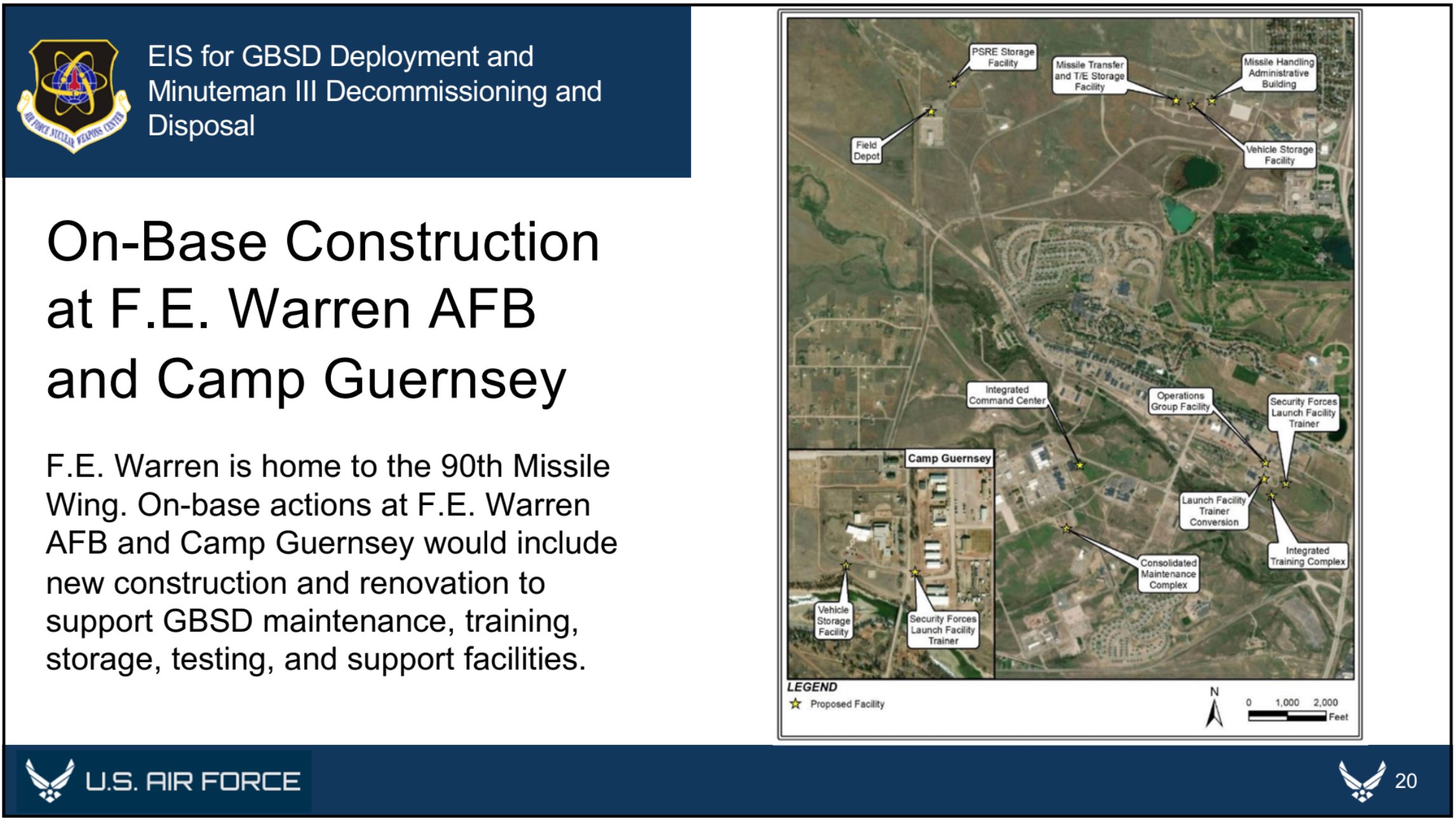 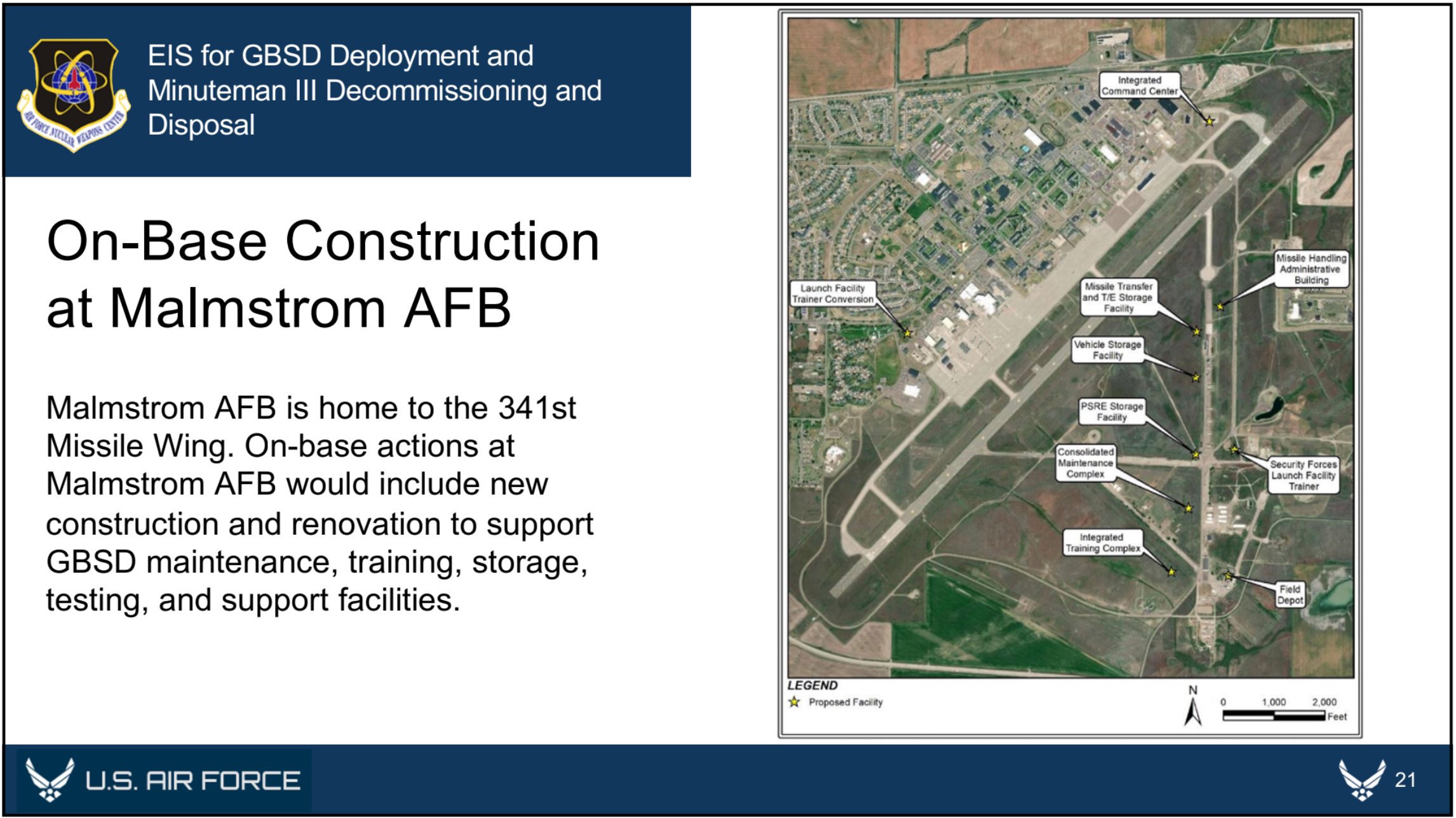 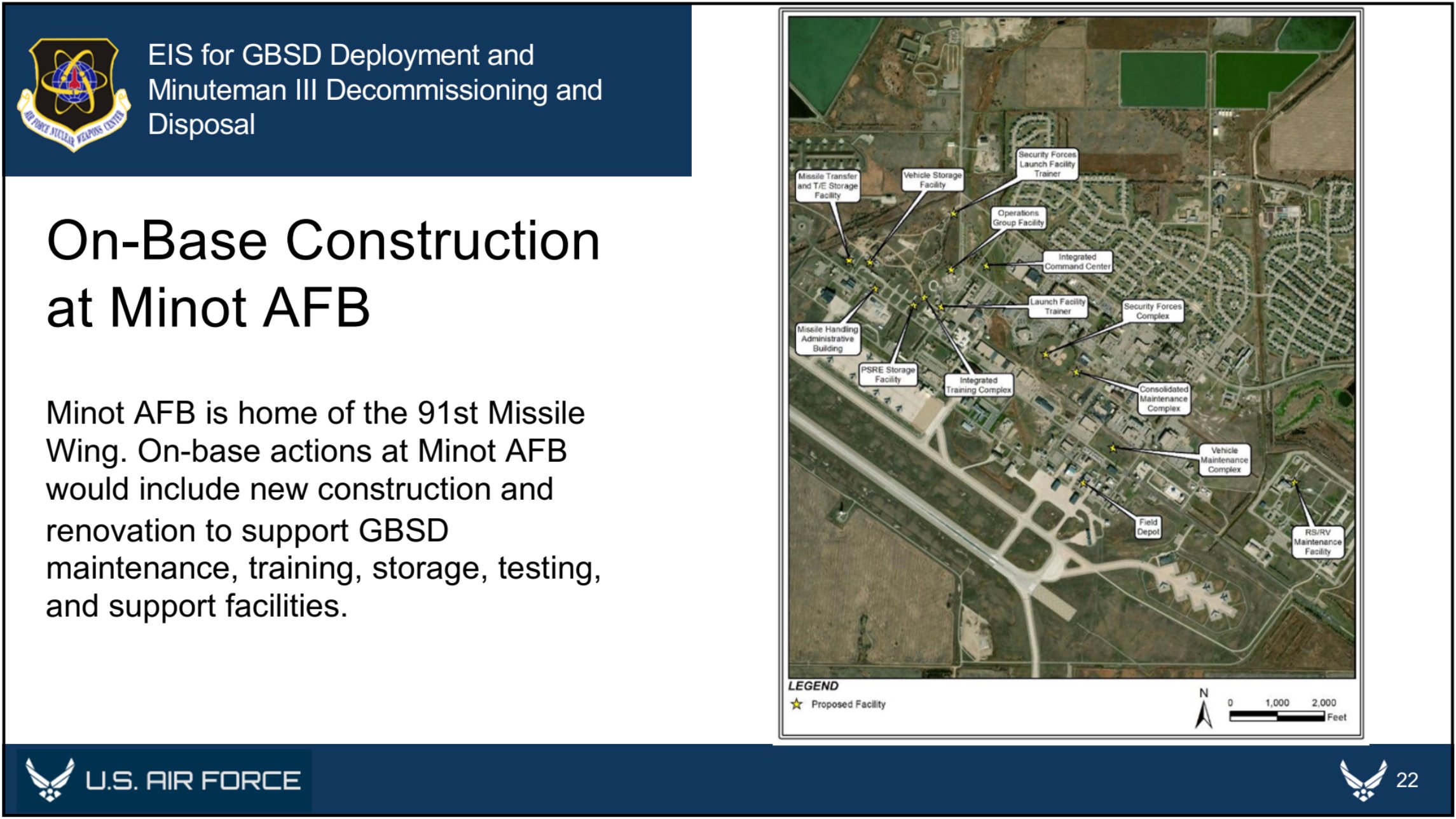 Finally, the EIS documents also provide an overview of how and where Minuteman III disposal activities will take place. Upon removal from their silos, the Minutemen IIIs will be transported to their respective hosting bases––F.E. Warren, Malmstrom, or Minot––for temporary storage. They will then be transported to Hill Air Force Base, the Utah Test and Training Range (UTTR), or Camp Najavo, in Arizona. It is expected that the majority of the rocket motors will be stored at either Hill AFB or UTTR until their eventual destruction at UTTR, while non-motor components will be demilitarized and disposed of at Hill AFB. To that end, five new storage igloos and 11 new storage igloos will be constructed at Hill AFB and UTTR, respectively. If any rocket motors are stored at Camp Navajo, they will utilize existing storage facilities. 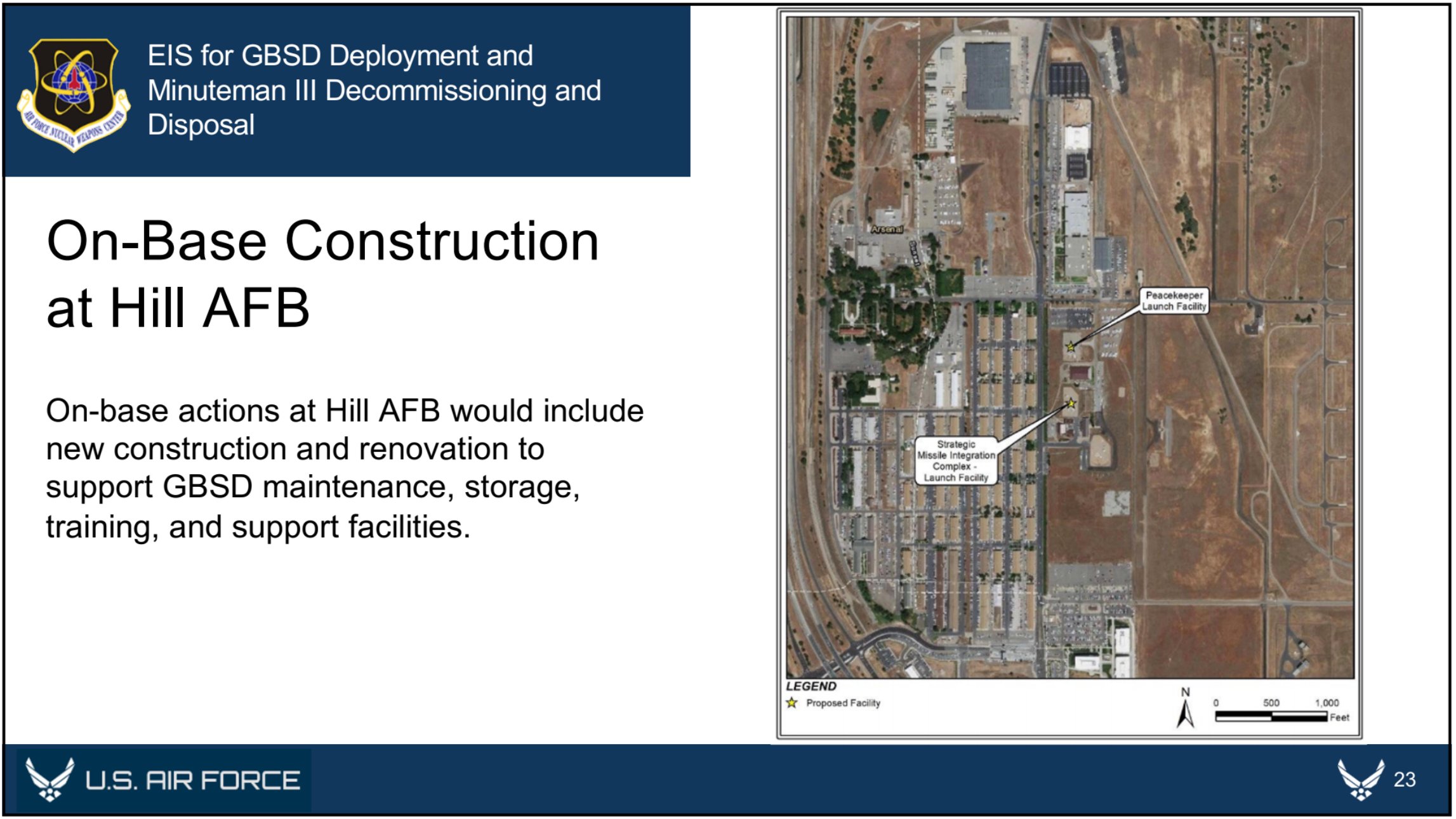 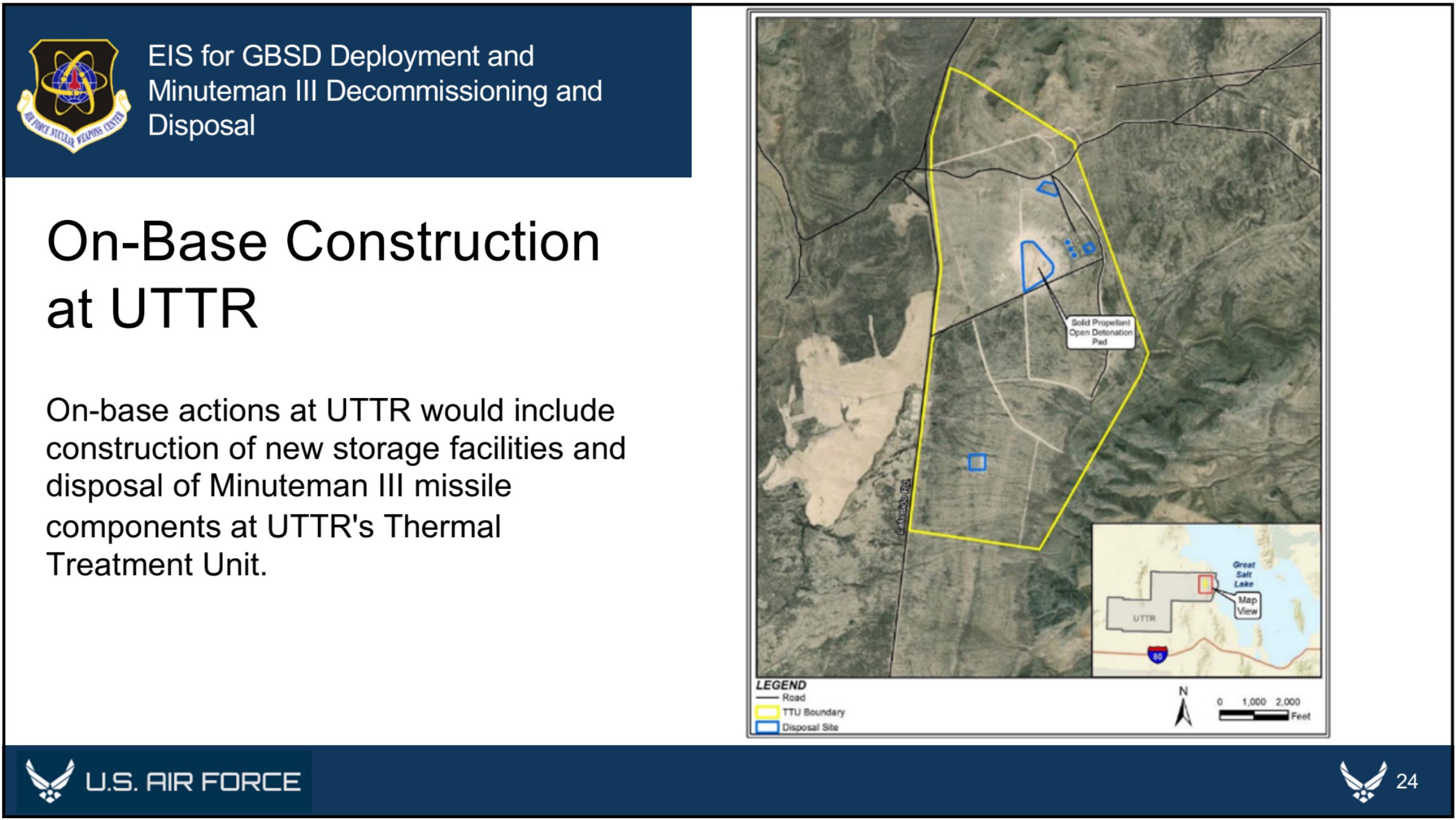 After the completion of public scoping on November 13th (during which anyone can submit comments to the Air Force via Google Form), the next public milestone for the GBSD’s EIS process will occur in spring 2022, when the Air Force will solicit public comments for their Draft EIS. When that draft is released, we should learn even more about the GBSD program, and particularly about how it impacts––and is impacted by––the surrounding environment. These particular aspects of the program are growing in significance, as it is becoming increasingly clear that the US nuclear deterrent––and particularly the ICBM fleet deployed across the Midwest––is uniquely vulnerable to climate catastrophe. Given that the GBSD program is expected to cost nearly $264 billion through 2075, Congress should reconsider whether it is an appropriate use of public funds to recapitalize on elements of the US nuclear arsenal that could ultimately be rendered ineffective by climate change.

This publication was made possible by generous contributions from the Carnegie Corporation of New York, the John D. and Catherine T. MacArthur Foundation, the New Land Foundation, the Ploughshares Fund, and the Prospect Hill Foundation. The statements made and views expressed are solely the responsibility of the author.