With every official statement about the B61 nuclear bomb life-extension program, the capabilities of the new version (B61-12) appear to be increasing.

Previously, officials from the DOD, STRATCOM, and NNSA said the program is a consolidation of the B61-3, B61-4, B61-7, and B61-10 gravity bombs that would provide no additional military capabilities beyond those weapons.

Yet the addition of a guided tail kit will increase the accuracy of the B61-12 compared with the other weapons and provide new warfighting capabilities. The tail kit is necessary, officials say, for the 50-kilotons B61-12 (with a reused B61-4 warhead) to be able to hold at risk the same targets as the 360-kilotons B61-7 warhead. But in Europe, where the B61-7 has never been deployed, the guided tail kit will be a significant boost of the military capabilities – an improvement that doesn’t fit the promise of reducing the role of nuclear weapons.

More recently we also learned that the guided tail kit will provide the B61-12 with a “modest standoff capability,” something the current B61 versions don’t have.

And during yesterday’s hearing in the House Armed Services Committee’s Subcommittee on Strategic Forces, defense officials said the B61-12 would also replace the B61-11, a single-yield 400-kiloton nuclear earth-penetrating bomb introduced in 1997, and the B83-1, a strategic bomb with variable yields up to 1,200 kilotons.

If so, the military capabilities of the B61-12 will be able to cover the entire range of military targeting missions for gravity bombs, ranging from the lowest yield of the B61-4 (0.3 kilotons) to the 1,200-kiloton B83-1 as well as the nuclear earth-penetration mission of the B61-11. 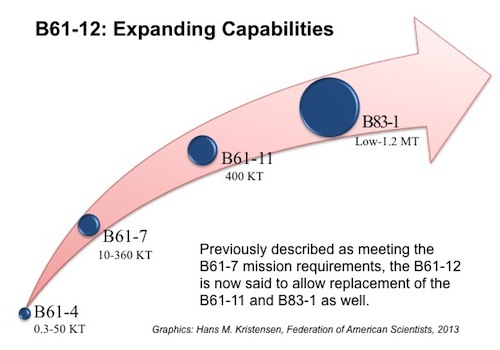 That’s quite an achievement for a weapon that just a few years ago was described simply as a refurbishment of four old B61s. Now the B61-12 has become the all-in-one nuclear bomb on steroids, spanning the full spectrum of gravity bomb missions anywhere.

That has some pretty significant implications in Europe where the United States has never deployed bombs with the military capabilities of the B61-7, B61-11 and B83-1. And it opens up a portfolio of enhanced targeting options with less radioactive fallout – more useable nuclear strike scenarios. Not bad for a simple life-extension, but less clear why it is needed and how it fits U.S. and NATO promises to reduce the role of nuclear weapons and seek “bold reductions” in U.S. and Russian nuclear weapons in Europe.

During yesterday’s hearing, the military and nuclear lab officials portrayed the B61-12 as key to future reductions and modifications of the nuclear stockpile.

Without the B61-12, so the argument goes, the United States would not be able to reduce its inventory of gravity bombs. In contrast, completion of the B61-12 program “will result in a reduction in the total number of nuclear gravity bombs in our stockpile by a factor of two,” according to NNSA.

That is a stretch, to say the least. In reality, nearly two-thirds of the gravity bombs currently in the stockpile are already inactive and would likely be retired anyway (see table).

Yesterday, the officials ridiculed the B83 as a nuclear dinosaur with too big a yield (1.2 Megatons) even though they admitted that it also has lower yields. But that has been the case for decades and the B83 role faded years ago. After Congress rejected using the B83 warhead for the Robust Nuclear Earth Penetrator (RNEP), the B83 was decertified from first the B-1 bomber and more recently the B-52 bomber as well. That leaves the B-2 as the sole carrier with many more B83s in the stockpile than needed. The same goes for the B61-7.

Despite serious questions raised about the scope, cost, and management of the B61-12 and many other nuclear modernization programs, the Pentagon and NNSA yesterday portrayed the B61-12 – as well as the yet unclear but highly risky 3+2 warhead plan for the entire stockpile – as the cheapest solution to all nuclear issues: deterrence, assurance, modernization, and reductions. If that doesn’t set off alarm bells, I don’t know what would.

The hearing reminded me of the hearing a few years back were the CEOs of the tobacco industry were asked if nicotine were addictive; under oath they all said “no.”

Similarly, when asked yesterday if they could see any reason why the United States should not continue with the planned B61 life-extension program, the nuclear officials all said “no.”

To me, the willingness to trade all gravity bombs for the B61-12 is a tacit admission that most of the existing weapons are not needed but offered as sweeteners to “sell” the expensive program to Congress and the public.

Except for Representatives Loretta Sanchez and John Garamendi, none of the members that had shown up for the hearing asked any critical or difficult questions. Instead they appeared to invite the views that they knew the witnesses had anyway. There were no independent witnesses at the hearing, which appeared to be intended as a pushback against efforts in the Senate to scale back the B61-12 program.

There are no targets for the B61-12 that cannot be held at risk with ballistic or cruise missiles. And it is unlikely that there are any nuclear bombs deployed in Europe a decade from now. Instead, a basic gravity bomb capability on the B-2 and next-generation bomber could be achieved with a simpler and cheaper non-nuclear life-extension of the B61 as proposed by Senator Dianne Feinstein.