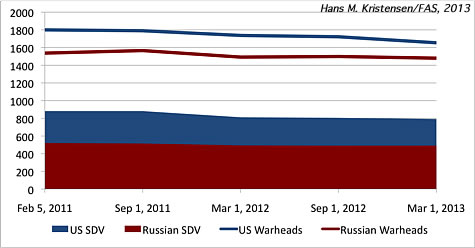 After two years of stalling, the latest New START Treaty aggregate data released today by the State Department indicates that U.S. warhead reductions under the treaty are finally picking up.

Russia, which is already below the treaty limit, has been more or less flatlining over the past year.

Seen in perspective, however, the warhead reductions achieved under New START so far are not impressive: since the treaty entered into effect in February 2011, the world’s two largest nuclear weapons states – with combined stockpiles of nearly 10,000 warheads – have only reduced their deployed arsenals by a total of 203 warheads!

The data for the United States shows a reduction of 68 warheads compared with September 2012. Fourteen of those are probably “fake” warheads attributed to B-52G bombers that are counted as deployed under the treaty, although they are neither deployed nor nuclear tasked anymore. The remaining 54-warhead reduction probably reflects downloading of the remaining MIRVed ICBMs (and some fluctuations in SLBM loadings of SSBNs in refit). Another 104 warheads will have to be reduced over the next five years to meet the treaty limit of 1,550 deployed accountable warheads by 2018 (although many of those will come from reducing bombers that are not actually assigned nuclear weapons).

Russia, which has been below the ceiling of 1,550 deployed accountable strategic warheads for the past year, appears to be flatlining. It is counted with a 19-warhead reduction compared with September 2012. But that number is too low say whether it reflects real reductions due to retirement of missiles or just fluctuations in SLBM loadings on SSBNs in refit. Russia increased its delivery vehicles slightly due to deployment of the first new Borei-class SSBN.

What’s most striking about the data, though, is the significant asymmetry in delivery vehicles: the United States has 300 deployed delivery vehicles more than Russia, a disparity that causes Russia to deploy more warheads on each delivery vehicle and fuels worst-case military planning and paranoia about treaty break-out plans.

A clear objective for the next arms control agreement between the United States and Russia will have to be to reduce the U.S. delivery vehicles and Russian warhead loading to improve stability of the postures.

Moreover, with only 203 deployed warheads cut since the New START Treaty entered into effect more than two years ago, and nearly 10,000 nuclear warheads remaining in their stockpiles combined, there is clearly a need for the United States and Russia to speed up implementation of the treaty and agree to significant additional reductions.

[Details about the reductions are murky because the aggregate data only includes overall numbers, and does not specify how many of each delivery system are counted. A more detailed analysis will follow when the full detailed U.S. data becomes available in a few weeks.]