The U.S. Air Force plans to arm the B-2A stealth bomber with a new nuclear cruise missile that is in the early stages of development, according to Air Force officials and budget documents.

The B-2A bomber, which is designed to slip through air defenses undetected, does not currently have a capability to deliver nuclear cruise missiles, a role reserved exclusively for B-52H bombers.

Under the Air Force’s plans, however, the new nuclear cruise missile – known as the Long-Range Standoff Weapon – will arm three nuclear bombers: the B-2A, the B-52H, and the next-generation Long-Range Strike Bomber.

The disclosure that the new nuclear cruise missile will be carried on the B-2A, B-52H, as well as the next generation bomber has emerged in recent Air Force testimony to Congress, the Air Force’s FY2014 budget request, and in a little notice interview in Air Force Magazine.

Maj. Gen. Garrett Harencak, assistant chief of staff for Air Force strategic deterrence and nuclear integration, informed Congress last week that the Long-Range Standoff (LRSO) nuclear cruise missile “will be designed at its outset to be compatible with B-52, B-2, and the LRS-B” (Long-Range Strike-Bomber).

Lieutenant General James Kowalski, the commander of Air Force Global Strike Command, confirmed: “The LRSO will be the follow-on to the aging ALCM and will be compatible with the B-52, B-2 and LRS-B.”

The Air Force budget request for FY2014 reveals that integration on the B-2 is already underway as part of a program known as Flexible Strike:

B-2 armament upgrades integrate new and/or advanced weapons on the B-2 to address a wider array of target sets, to include moving targets, and hardened, deeply buried targets. The Flexible Strike Phase 1 program — formerly known as Stores Management Operational Flight Program re-host — will recombine and rehost the current B-2 stores management software onto a new integrated processor, providing the processing and bandwidth to handle advanced digital weapons such as B61-12 or Long Range Stand Off (LRSO).

Production and fielding of the Flexible Strike Phase 1 program is planned for FY2016-FY2017, in time to receive the new guided B61-12 bomb in 2019 and the LRSO cruise missile in the mid/late-2020s.

In the public debate about the cost of nuclear weapons modernizations, it is often said that the new long-range strike bomber is not a significant nuclear cost because most of its mission is non-nuclear. But that ignores the expensive nuclear payloads (B61-12 and LRSO) that are intended to arm the new bomber.

The full cost of the new nuclear cruise missile is not known yet, because it will not become operational until the mid/late-2020s. But the budget projections in the FY2014 budget request indicate that it will be a very expensive weapon system.

Over the next five years alone, design and development costs for the missile are expected to reach more than $1 billion. Costs will presumably continue to accumulate significantly through the mid/late-2020s as full-scale production and delivery of the weapon get underway. 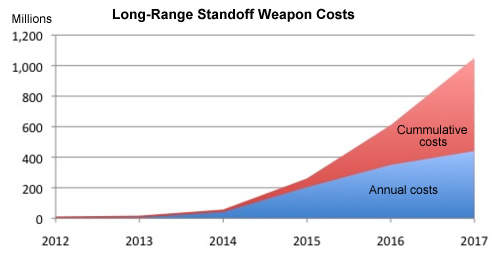 In addition to the cost of the missile itself, the production of the nuclear warhead will add even more. Rather than a new warhead, the Air Force plans to use a life-extended version of an existing warhead: W80-1, W84, or the B61. If other life-extension programs are any indication, then the LRSO warhead program can be expected to cost several billion dollars.

The B-2A bomber is designed to penetrate air defenses undetected. So why would the Air Force want to add a nuclear cruise missile to its mission? The answer appears to be that expected improvements in enemy air defense systems by 2030 will make the stealth bomber less stealthy and that a standoff capability therefore is needed for the nuclear strike mission.

When deployed on the B-2A, the LRSO will give the stealth bombers a nuclear standoff capability to carry out missions in heavy air defense environments, according to Billy Mullins, the associated director of strategic deterrence and nuclear integration on the Air Staff.

But that doesn’t quite explain why the Air Force has decided to make the new cruise missile compatible with all three bombers. After all, the B-52H already provides a standoff capability. Perhaps the LRSO will be dual-capable (although this has not been stated) or that the Air Force has simply decided to add a new nuclear cruise missile to all three bombers to provide maximum flexibility.

The new nuclear cruise missile will probably have extended range and stealth features similar to or better than the Advanced Cruise Missile (ACM) that the Air Force retired in 2007. The Air Force states that LRSO “will be capable of penetrating and surviving advanced Integrated Air Defense Systems (IADS) from significant stand off range to prosecute strategic targets in support of the Air Force’s global attack capability and strategic deterrence core function.”

Since the B-2A does not currently carry nuclear cruise missiles, which are exclusively for B-52H bombers, but only gravity bombs (B61-7, B61-11, and B83-1), adding the LRSO will significantly increase the military capability of the B-2A weapon system.

Moreover, adding LRSO capability to all three bombers would be a significant expansion of the nuclear cruise missile capacity of the U.S. bomber fleet. Currently, some 528 ALCMs are assigned to 44 B-52H bombers in four squadrons of the 2nd and 5th Bomb Wings. In the future, also the 509th Bomb Wing at Whiteman AFB would also receive nuclear cruise missiles, as would the bases that receive the next-generation bomber.

It seems a bit strange, though, to spend money adding LRSO capability to the B-52H because that bomber is scheduled to retain the ALCM to 2030 and retire only 10 years later. The ALCM is currently undergoing refurbishment to ensure that it can remain in service through the 2020s.

Overall, the nuclear capability of the bomber force is expected to change significantly over the next couple of decades as older weapons are retired and new ones added. In addition to the new LRSO, this includes the new guided B61-12 bomb and the possible retirement of the B61-7 and B83-1 bombs. 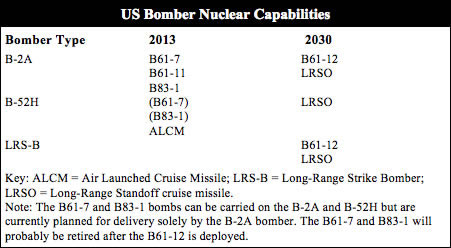 Eventually, both the B-2A and B-52H (as well as the non-nuclear B-1B) will be replaced by a fleet of 100 Long-Range Strike Bombers. Probably not all of them will be nuclear-capable, though, but perhaps half equipped with the B61-12 and LRSO nuclear weapons.

The implications of adding nuclear cruise missile capability to the B-2A stealth bomber are many. They include improved military capabilities, extensive costs, and the international perception of what U.S. nuclear arms control policy is in the 21st century.

If one believes that a nuclear cruise missile is still needed, a better and less expensive alternative would be to only add LRSO capability to the next-generation bomber and phase out the nuclear capability of B-52H when the current ALCM retires around 2030.

Either way, deploying an improved nuclear cruise missile on improved stealthy bombers appears to challenge the Obama administration’s promise to reduce the role of nuclear weapons and not to add military capabilities during life-extension programs.