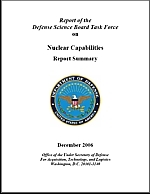 The Defense Science Board concludes in a new report that the United States has lost its “national consensus” on what the nation’s nuclear deterrent should look like and the role it should serve. The consensus has been replaced by an “entrenchment” of “sharp differences” of opinion. Therefore, urgent action is needed by the White House and senior leaders to “engage more directly to articulate the persuasive case” for how modern nuclear weapons serve U.S. national security policy.

U.S. nuclear policy has come to a crossroad because the current formula is no longer sustainable.

Perhaps not coincidently, the DSB report comes as the administration is preparing to persuade Congress to pay for a new nuclear weapons complex (Complex 2030) to resume production of nuclear weapons for the first since since the end of the Cold War. To that end, the report presents a wide range of recommendations for how to revitalize the U.S. nuclear posture.

1. Leaders should declare “unequivocally and frequently” that nukes are still needed.
2. Establish a Red Team to look for nuclear enemies.
3. Establish a Deterrence Team to figure out how to better deter current and future adversaries.
4. The missile defense under construction is inadequate to deal with countermeasures and needs to be upgraded.
5. Accelerate development of “a credible Nuclear Leg of the Strike Triad.”
6. Figure out what to do with nuclear forces beyond the SORT treaty, but hedge (it is now called “remain reversible”) against negative developments in Russian and China.
7. Modernize the command and control system.
8. The Nuclear Weapons Council should establish a policy that no single warhead type makes up more than 20 percent of the deployed stockpile (i.e., the stockpile should consist of at least five different warhead types).
9. RRW-1, as the first Reliable Replacement Warhead prototype is called, should be a full weapons program.

Recommendations for the nuclear weapons production complex include:

Yet Another RRW Vision?

One of the surprises in the report is that the DSB seems to have a different long-term vision for the RRW than the administration. A drawing in the DSB report shows how the composition of nuclear warheads would change with the introduction of RRWs. The drawing a future mix of equal numbers of RRWs and existing life-extended warheads (see figure below).

That vision is very different from the one presented by the Secretary of Energy, Secretary of Defense, and the Nuclear Weapons Council in their joint interim RRW report to Congress in March 2006. A drawing in that report showed a future mix of warheads where RRWs would replace all life-extended warhead types (see figure below).

The DSB report comes across as an attempt to “resell” the 2001 Nuclear Posture Review. It is a report on the defensive that suggests that critics of Cold War nuclear policy and excessive capabilities have had a considerable impact on U.S. nuclear policy and the mood inside the administration and Congress.

A major shortfall of the report is this: Despite lamenting that new thinking is urgently needed, the DSB report offers no new ideas for why it is necessary to revitalize the nuclear posture, except the arguments made in the 2001 Nuclear Posture Review and the 2004 DSB report on the future of strategic forces. Instead of defining the new agenda, the DSB report appears to be defending the current agenda.

This is perhaps not surprising considering that the entire DSB Task Force consisted of people from the nuclear labs, major defense contractors and conservative think tanks. Some were even the architects of the 2001 Nuclear Posture Review. All advisors are from the Pentagon, the nuclear agencies, and the nuclear labs. The DSB report’s primary conclusion is that new thinking is needed, but the list of participants and briefings received strongly suggests that no attempt was made to think “outside the box.”

The failure to involve others and new ideas is perhaps the worst enemy of U.S. nuclear policy, not to mention a disfavor to national and international security.