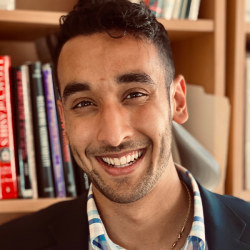 Ishan Sharma is a Fellow and Policy Analyst at the Federation of American Scientists where he oversees the development, curation, technical assistance and implementation of key science and technology policies with a focus on foreign affairs, critical and emerging technologies, and lab-to-market innovation. He directed the FAS Special Project on Emerging Technologies and International Security, which devised cohesive domestic and foreign policy recommendations to counter the emergence of digital authoritarianism. His work has been featured in BBC, the UN Special Rapporteur on Freedom of Religion or Belief, Lawfare’s Cyberlaw Podcast, and at TEDx. Ishan sits on the board of two nonprofits that aim to empower youth through mentorship and media literacy, and is one of 24 Senior John Lewis Fellows investigating the future of democracy, oppression, and human rights in the 21st century. He holds a B.S. from Cornell University and has studied jurisprudence and international human rights law at the University of Oxford.

Ishan first joined FAS as a Herbert Scoville Jr. Peace Fellow. Before that, Ishan helped the Government Accountability Project expose abusive conditions at immigrant family detention facilities and widespread corruption with a former EPA Administrator. He spent a year organizing a summit to raise awareness on child sex trafficking in Ithaca, and two years as a mentor for justice-involved youth. Since 2016 he has also helped lead seven mentorship-based service trips in Costa Rica, Nicaragua, Orlando, and Ithaca. His grant-funded college thesis, “Colored Lenses,” investigated the influence of racial stereotypes on our perceptions of conflict with one another.

Are changing politics and new technologies making it harder to be a dissident?
BBC News World Service, August 2021
The Xi-Hawley Global Consensus on Tech Platforms
Lawfare Cyberlaw Podcast, March 2021
China’s Catch-22 and the fate of the world wide web
China’s Neocolonialism in the Political Economy of A.I. Surveillance
China's exportation of artificially intelligent surveillance systems (AISS) to developing countries is a a form of exploitation that shares characteristics with 19th century British and French colonialism.