On this day, ten years ago, U.S. President Barack Obama and Russian President Dmitri A. Medvedev signed the New START treaty during a ceremony in Prague. The treaty capped the number of strategic missiles and heavy bombers the two countries could possess to 800, with no more than 700 launchers and 1,550 warheads deployed. The treaty entered into force in February 2011 and into effect in February 2018.

Twice a year, the two countries have exchanged detailed data on their strategic forces. Of that data, the public gets to see three sets of numbers: the so-called aggregate data of deployed launchers, warheads attributed to those launchers, and total launchers. Nine years of published data looks like this:

The latest set of this data was released by the U.S. State Department last week and shows the situation as of March 1, 2020. As of that date, the two countries possessed a combined total of 1,554 strategic missiles and heavy bombers, of which

1,140 launchers were deployed with 2,699 warheads (note: the warhead number is actually about 100 too high because each deployed bomber is counted as one weapon even though bombers don’t carry weapons under normal circumstances).

Compared with February 2011, the data shows the two countries combined have cut 435 strategic launchers, reduced deployed strategic launchers by 263, and reduced the number of deployed strategic warheads by 638. While important, it’s important to remind that this warhead reduction is but a fraction (less than 8 percent) of the estimated 8,110 warheads that remain in the two countries combined nuclear weapons stockpiles (less than 6 percent if counting their total combined inventories of 12,170 stockpiled and retired (but yet to be dismantled) warheads).

Compared with February 2011, the United States has reduced its inventory of strategic launchers by 324, deployed launchers by 227, and deployed strategic warheads by 427. While important, the warhead reduction represents only a small fraction (about 11 percent) of the 3,800 warheads that remain in the U.S. stockpile (a little over 7 percent if counting total inventory of 5,800 stockpiled and retired (but yet to be dismantled) warheads).

The New START data shows Russia with an inventory of 764 strategic launchers, of which 485 are deployed with 1,326 warheads attributed to them. Compared with six months ago, this is a reduction of 28 deployed launchers and 100 deployed strategic warheads and reflects launcher maintenance and upgrade work to new systems.

Compared with February 2011, Russia has cut its inventory of strategic launchers by 111, deployed launchers by 36, and deployed strategic warheads by 211. This modest reduction represents less than 5 percent of the estimated 4,310 warheads that remain in Russia’s nuclear weapons stockpile (less than 4 percent if counting the total inventory of 6,370 stockpiled and retired (but yet to be dismantled) Russian warheads).

The Russian reductions accomplished under New START are smaller than the U.S. reductions because Russia had fewer strategic forces than the United States when the treaty entered into force in 2011.

With frequent claims by U.S. officials and nuclear weapons advocates that Russia is increasing its nuclear arsenal, it is interesting that despite a significant modernization program, the New START data shows this increase is not happening in the size of Russia’s strategic nuclear forces.

On the contrary, the New START data shows that Russia now has 170 deployed strategic launchers fewer than the United States, a number that exceeds the size of an entire US Air Force ICBM wing. The Russian launcher deficit has been growing by more than one-third since the lowest point of 125 in February 2018.

The Russian military is trying to compensate for this launcher disparity by increasing the number of warheads that can be carried on newer missiles replacing older types. Most of these warheads are not deployed on the missiles under normal circumstance but stored and could potentially be uploaded onto launchers in a crisis. The United States also has such an upload capability for its larger inventory of launchers and therefore is not at a strategic disadvantage.

Two of Russia’s new strategic nuclear weapons (Avangard and Sarmat) are covered by New START. Other types are in relatively small numbers and do not appear capable of upsetting the strategic balance. The treaty includes provisions for including new weapon types.

In addition to the New START data, the U.S. State Department also recently updated its overview of the status of the on-site inspections and notification exchanges that are part of the treaty’s verification regime.

Since February 2011, U.S. and Russian inspectors have carried out 328 on-site inspections of each other’s strategic nuclear forces and exchanged 19,852 notifications of launcher movements and activities. Four inspections happened this year before activities were temporarily halted due to the Coronavirus. 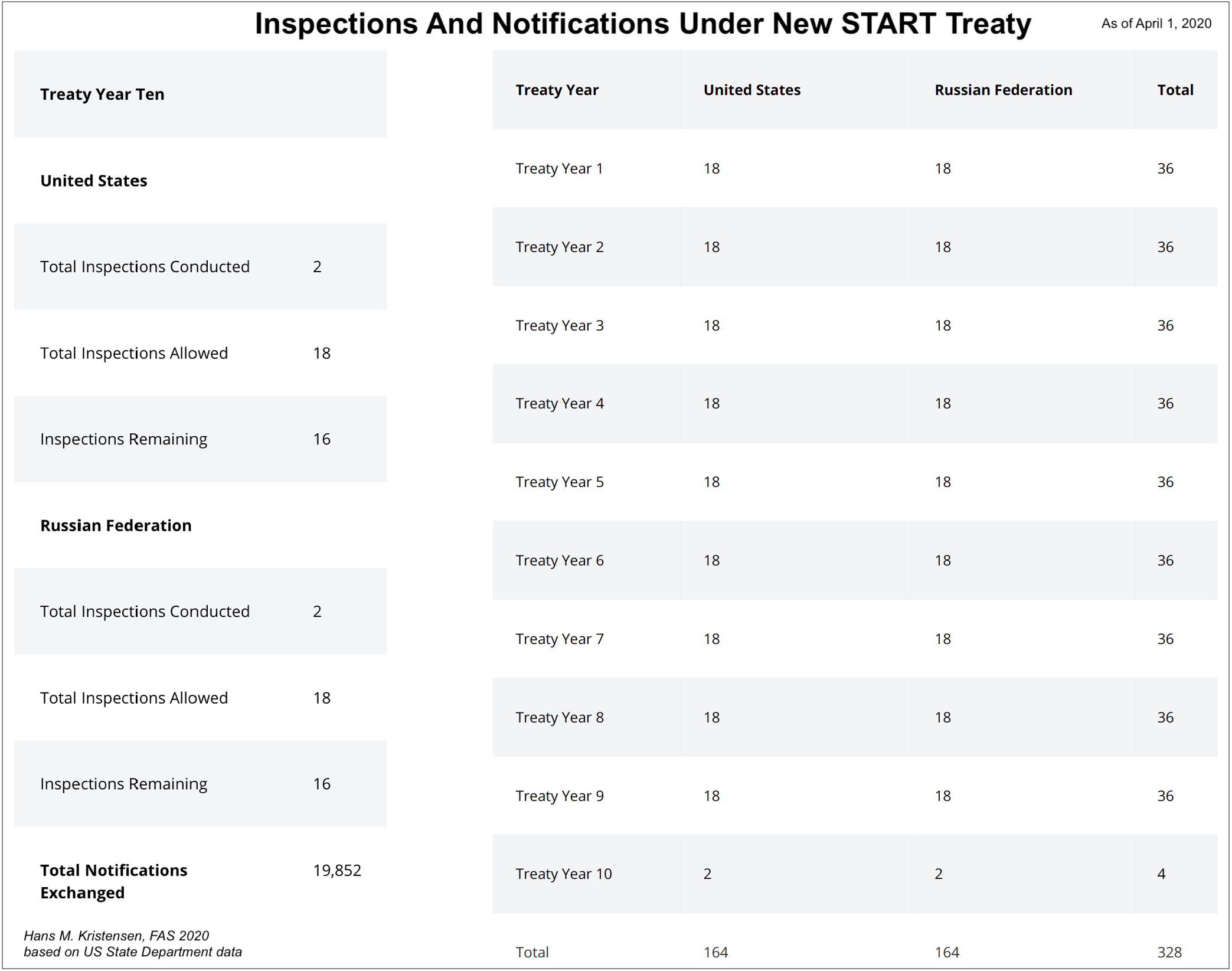 This inspection and notification regime and record are crucial parts of the treaty and increasingly important for U.S.-Russian strategic relations as other treaties and agreements have been scuttled.

But time is now also running out for New START with only a little over 10 months remaining before the treaty expires on February 5, 2021.

Russia and the United States can extend the New START treaty by up to 5 more years. It is essential both sides act responsibly and do so to preserve this essential agreement.