The June 18th arrest of two men for allegedly plotting to build a bizarre yet potentially deadly radiological device once again highlights the potential nexus of non-state actors with so-called weapons of mass destruction (WMD). However, much like this year’s troika of ricin-laced letters addressed to government facilities (including one to the CIA) and public officials (all three incidents targeted President Obama at his White House address), this most recent plot reveals the historical rarity and non-lethality of non-state actors and their behaviors with radiological weapons and agents. While the potential for catastrophe posed by terrorist use of chemical, biological, radiological, and nuclear (CBRN) weapons deserves ongoing and serious attention, recent events remind us how public apprehension is sometimes founded more in fear than reality; indeed, reactions based on fear are capable of far more disruption than the physical reality of the event itself.  The role of science-based organizations such as the Federation of American Scientists is to educate the public about the real risks. [box border=”full”]The methodologies and data sets used in this article, augmented by several others of each, will be discussed in a two day professional education summer course, “Terrorism Analysis: Quantitative and Qualitative Research Methodologies and Tools” held at George Mason University in Fairfax, VA on July 25-26, 2013. This non-credit course introduces participants to state-of-the art analytical techniques, research methods, and cutting-edge databases used by the industry for the study of terrorism. Course participants gain a detailed understanding of single and multi-methodological techniques, learning how to develop analytical tools applicable to the needs of those responsible for preventing, preparing, responding to, or predicting terrorism. Highlights include how to use these research techniques to identify previous and emerging trends in terrorist activities and to cogently assess the potential role of WMD in terrorism. Register now for the “early bird” discount – 25 percent less than the listed fee. For more information and to register, please visit the course page.[/box]

Of the CBRN threats, the nuclear threat is undoubtedly truly catastrophic because a nuclear weapon can cause massive destruction, but obtaining a nuclear weapon or the fissile material to make such a weapon is very hard to do. In comparison, radiological sources are far more common, but most of them would cause little or no harm to human health if dispersed by a radiological weapon because there is not enough radioactive material contained in the vast majority of each of these sources. And even those radiological sources containing highly radioactive materials would pose great difficulties for terrorists to use because they would hazard exposing themselves to lethal ionizing radiation. These latter issues, and others outlined below, are very relevant to the recent radiological plot.

According to Tuesday’s radiological- related FBI affidavit, Glenford Scott Crawford, an industrial mechanic who reportedly self-identified as a member of the Ku Klux Klan, plotted to build “a mobile, remotely operated, radiation emitting device capable of killing human targets silently and from a distance with lethal doses of radiation.” Crawford, along with Eric J. Freight, an electronics specialist, allegedly succeeded in constructing a “remote initiation device,” but according to the FBI’s affidavit had not yet “weaponized” the device before their arrest. Monitored by the FBI since April 2012, the duo never obtained a radiological source for their device.

Active in two small towns near Albany, New York, over the past year, Crawford and Freight unwittingly dealt with at least one FBI planted “confidential human source” who posed as a potential financer of the project and buyer of the finished device. Tuesday’s arrests came as the suspects, “planned to conduct a test-run of the triggering system.”

Contrary to public perceptions of radiological weapons, or “dirty bombs,” as weapons of mass destruction, experts correctly note that radiological attacks could not produce mass destruction or mass casualties. This is because when dispersed the radioactive material would be spread out over a wide area and thus would be far less potent than material concentrated in the original source. Moreover, trying to use the original source as a lethal means of exposing large numbers of people from a distance would be hard to do because the potency of the ionizing radiation would decrease the farther the source is from the targeted population. Specifically, it would decrease as one divided by the distance squared. For example, an unshielded source that is lethal at one-meter distance would have a potency of one one-hundredth when the source is ten meters away and would not likely pose a lethal threat.

Thus, the reality is that radiological devices are “weapons of mass disruption” – likely to directly generate few, if any, immediate casualties via ionizing radiation, yet capable of precipitating mass panic and large-scale economic disruption.

Similarly, belying public apprehension of radiological terrorism, there is the extreme rarity of such events; indeed, terrorist use of harmful radioisotopes, according to open-source data, numbers no more than three incidents—none of which generated casualties. If other non-state actors are included, those not considered terrorists, but include, for example, lone actors seeking revenge, recorded radiological incidents are more numerous, but still strikingly rare. A finding from a 2009 study—conducted by a University of Maryland (UMD) research team that included this author, combined with research into radiological events occurring subsequent to the studies completion—reveals only 19 recorded radiological incidents by non-state actors. (Maintaining harmony with the UMD study, the criteria for inclusion excluded hoaxes and “clear cases of smuggling or transfer activity with no apparent links to end-users.”)

Taking a brief pause, here are some basic nuclear physics useful when putting this event in the proper context. The entire universe consists of less than 120 elements; 92 are naturally occurring. Each element contains a unique number of protons. While their number of protons remains the same, some elements possess different numbers of neutrons. These are called isotopes. With neutrons in greater quantity than those found in lead and bismuth, are isotopes prone to natural decay. Such unstable isotopes are referred to as radioisotopes, which undergo decay in one of three ways: alpha, beta, or gamma decay. Depending on the rate of decay and the other factors, less than a dozen radioisotopes pose serious health risks.

Easily blocked from entering the human body, alpha emitting radioisotopes pose a health risk via inhalation or ingestion. Beta particles possess greater penetrating power, yet these can be blocked by thin layers of lead or other dense materials. It is gamma particles that pose the greatest health risk via exposure. The device Crawford and Freight sought—“a radiation emitting device that could be placed in the back of a van to covertly emit ionizing radiation strong enough to bring about radiation sickness or death against Crawford’s enemies,” required a radiological source emitting high-energy gamma rays.

States long ago foresaw radiological weapons as ineffective for battlefield use—easily obviated by many conventional and unconventional weapons.  As early as 1943, notes Robert S. Norris in his 2002 book Racing for the Bomb, the “impending invasion of Europe precipitated fears and concerns about possible German use of radioactive materials on Allied forces.” U.S. scientists investigated the threat. They concluded, Norris writes, “that there would be many difficulties in devising munitions that would effectively deliver radioactive materials…” Still, Norris explained to this author on June 20, 2013, “Even in the early 1940s the fear of radioactivity was enough to move Allied planners to equip some D-Day soldiers with dosimeters.” Thankfully, Nazi Germany did not develop radiological weaponry and although serious consideration was given to their potential development (including the United States), no open-source data exists of any state having done so with the exception of one incident. The November 2006 death of Alexander Litvinenko, occurring three weeks after the former Russian Federal Security Service (FSB) officer drank tea containing polonium-210 (Po-210) in a London restaurant, was likely the work of Russian state operatives.

Non-state actors, in contrast, sometimes perceive harmful radioisotopes as an effective means towards achieving their goals. With regard to four possible perpetrator types, of the 19 recorded incidents, lone-actors account for ten. Four incidents are attributed to formal organizations and two to unaffiliated cells. Unknown perpetrator types account for three incidents.

Figure 1 demonstrates the variety of general ideologies adhered to by the perpetrators. Note that the most active of all individuals and groups with “Religious” and “Personal / Idiosyncratic” ideologies were Sunni Islamists and U.S. right-wing extremist respectively. 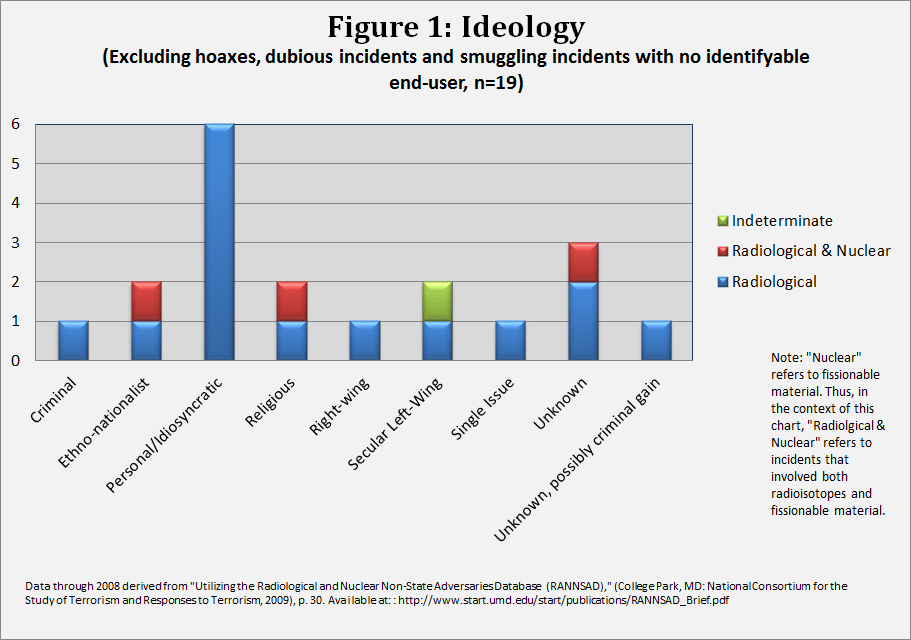 Figure 2 reveals how far along groups and individuals got on the spectrum of radiological activity. As noted in the UMD study, perpetrators successful in acquisition of radioisotopes more likely than not used the materials, although “success” came in only five of the incidents (assuming operational objectives that included generating casualties). The data set used to compile the previously mentioned UMD study—the Radiological and Nuclear Non-State Adversaries Database (RANNSAD)—when enlarged by this author’s subsequent research, reveals the following:  four incidents that each resulted in one injury. A fifth incident, involving the use of iridium-192 (Ir-192) by a “nuclear medical researcher” in Guangzhou, China, sickened 75 individuals. When correctly excluding the death of Alexander Litvinenko, noted earlier as likely due to state actions, radiological incidents writ large have yet to yield a single fatality. 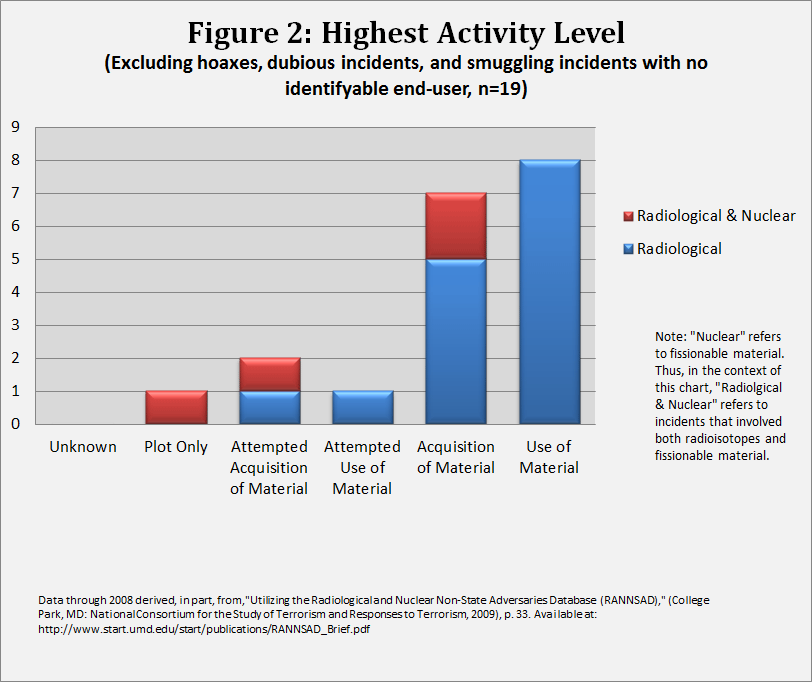 Some radioisotopes pose an extreme risk. One case of inadvertent dispersal—the 1988 Goiânia, Brazil, incident—killed four and negatively affected thousands. For well over a decade experts have warned of the likelihood of terrorist use of radioisotopes (almost half the expert respondents in a seminal 2005 survey “judged the risk of such an attack [occurring in the next ten years – i.e. by 2015] as 50 percent or greater”).  Explaining non-use is akin to proving a negative—impossible. The latest incident, as farcical as elements of it may seem, should serve as a reminder that, despite a paucity of incidents and no fatalities, non-state actors continue to plot and actualize the nefarious use of radioisotopes.