The Senate passage of Resolution 65 on May 22, 2013, some argue, draws the United States closer to military action against Iran. In October 2012, amid concerns that surprisingly little research addressed the potential broad outcomes of possible U.S.-led actions against Iran, researchers at the Federation of American Scientists (FAS) assembled nine renowned subject matter experts (SMEs) to investigate one underexplored question that now, eight months later, looms larger than ever: What are the potential effects on the global economy of U.S. actions against Iran? Collectively representing expertise in national security, economics, energy markets, and finance, the SMEs gathered for a one-day elicitation workshop to consider the global economic impacts of six hypothetical scenarios involving U.S.-led actions.

The elicitation revealed the rough effects of U.S. action against Iran on the global economy – measured only in the first three months of actualization – to range from total losses of approximately $60 billion on one end of the scale to more than $2 trillion to the world economy on the other end.

The results of the elicitation were compiled into the FAS report written by Charles P. Blair and Mark Jansson, “Sanctions, Military Strikes, and Other Potential Actions Against Iran.”

Summarized below are three of the six scenarios along with the associated estimated range of costs to the world economy in the first three months of U.S. action alone.

The president, not wanting to leave the job half-done and fearing that a more limited strike may not achieve all of its objectives or at too high a price should Iran retaliate, opts for a more thorough mission. The United States leads an ambitious air campaign that targets not only the nuclear facilities of concern but also seeks to limit Iran’s ability to retaliate by targeting its other military assets, including its air defenses, radar and aerial command and control facilities, and much of Iran’s direct retaliatory capabilities. These would include its main military bases, the main facilities of the Iranian Revolutionary Guard Corps (IRGC), and the Iranian Navy, Army, and Air Force. The United States seeks to ensure that the Strait of Hormuz remains open by targeting Iranian capabilities that may threaten it. 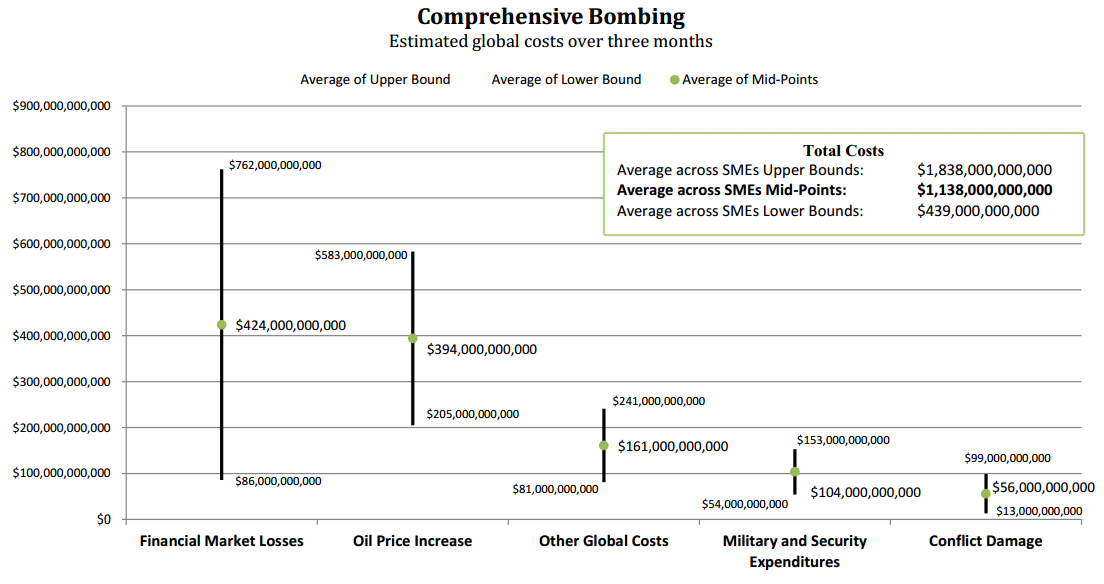 Iran’s economy is reeling yet diplomatic agreement remains elusive. The United States, concerned that the Iranian regime has gone into survival mode, enacts what can be referred to as a “total cutoff” policy. The United States moves to curtail any exports of refined oil products, natural gas, energy equipment, and services. Investments in Iran’s energy sector are banned worldwide. Official trade credit guarantees are banned, as is international lending to Iran and investment in Iranian bonds. Insurance and reinsurance for all shipping going to and from Iran is prohibited. Substantial U.S. military assets are deployed to the Persian Gulf to block unauthorized shipments to and from Iran as well as to protect shipments of oil and other products through the Strait of Hormuz. 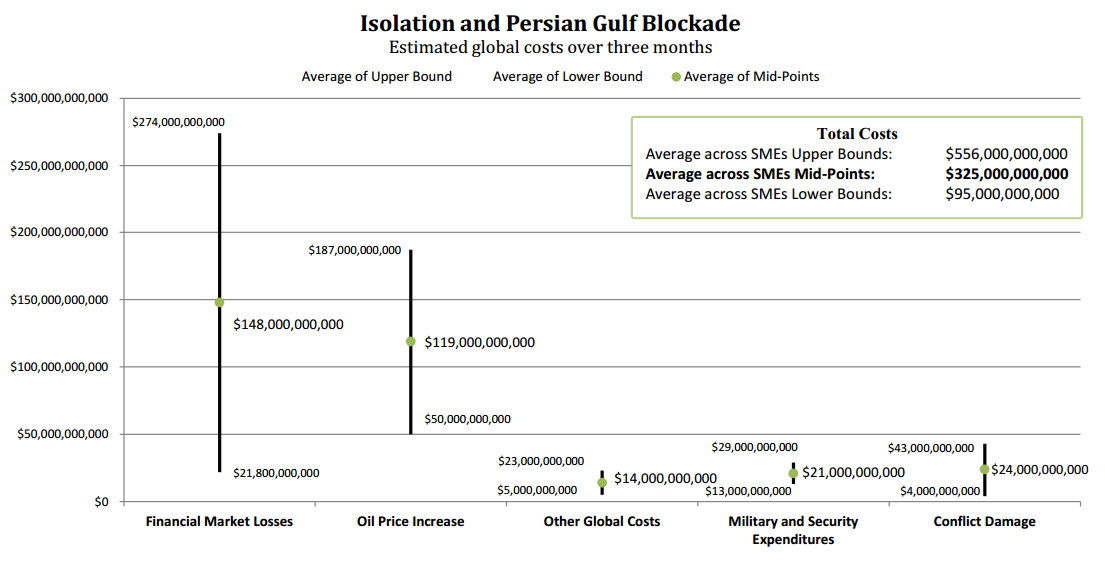 The United States resolves to invade, occupy, and disarm Iran. It carries out all of the above missions and goes “all in” to impose a more permanent solution by disarming the regime. Although the purpose of the mission is not explicitly regime change, the United States determines that the threat posed by Iran to Israel, neighboring states, and to freedom of shipping in the Strait of Hormuz cannot be tolerated any longer. It imposes a naval blockade and a no-fly zone as it systematically takes down Iran’s military bases and destroys its installations one by one. Large numbers of ground troops will be committed to the mission to get the job done. 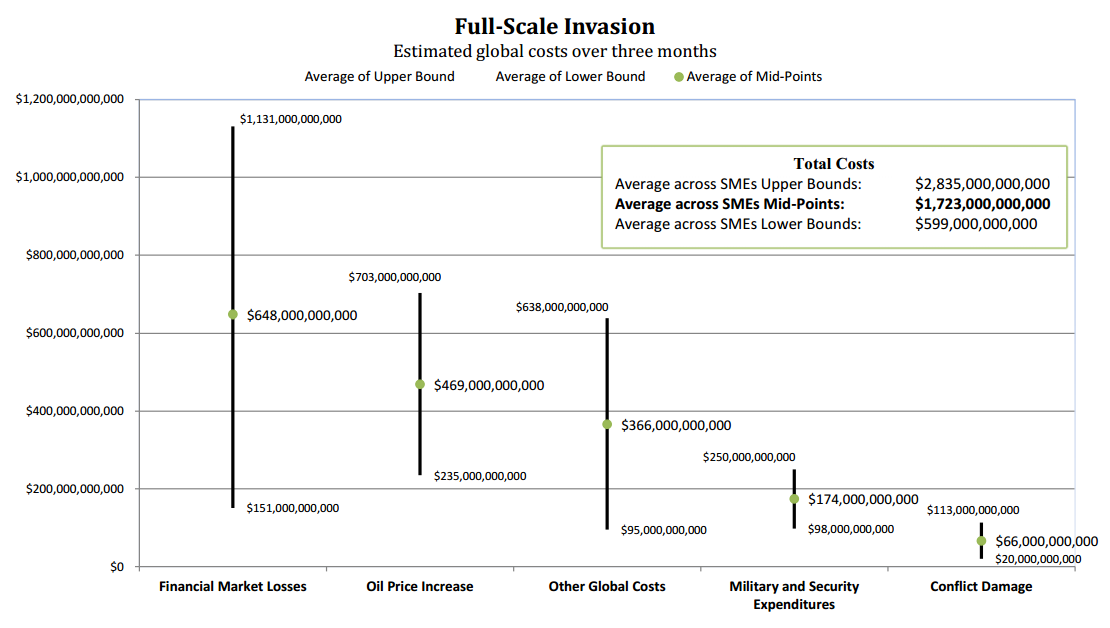 Note: All opinions expressed here and in the report, as well as its findings, are those of the authors alone and do not necessarily reflect the views of the Federation of American Scientists or any of the participants in the elicitation that served as the centerpiece of this study.

9 thoughts on “War with Iran? Revisiting the Potentially Staggering Costs to the Global Economy”