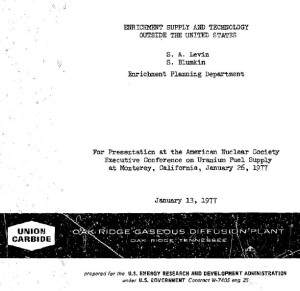 FAS has posted a report on “Enrichment Supply and Technology Outside the United States” by S. A. Levin and S. Blumkin from the Enrichment Department of the Oak Ridge Gaseous Diffusion Plant, operated at the time by Union Carbide. The document, prepared for the U.S. Energy Research and Development Administration, reviews international uranium enrichment capacity and isotope separation technology as of 1977.

Apart from being of historical interest, the report explicitly states that Eurodif, a French-organized multinational enrichment consortium, was in part owned by Iran.

“The membership and apportionment of shares in Eurodif has been changeable. Presently, it is constituted by Belgium and Spain 11% each. Italy 25%, France 28% and Sofidif 25%, which is 40% owned by Iran and 60% by France.”

“In 1975, another consortium called Coredif with the same multinational membership as Eurodif but a different distribution of shares (Eurodif 51%, France 29% and Iran 20%) was organized to assess future nuclear demand and build a second Eurodif-type plant if the study results justified it.”

This is consistent with Iran’s claims that it owned shares of the enrichment company prior to the Islamic Revolution in 1979. This claim has been confirmed by the French government, but Iran has never received enriched uranium from the company.

The document has a disclaimer that “[i]t should not be presumed that the inclusion in this presentation of any reported information necessarily attests to its validity.”