Last week I was in New York to brief two panels at the Third Session of the Preparatory Committee for the 2015 Review Conference of the Parties to the Treaty on the Non-Proliferation of Nuclear Weapons (phew).

The first panel was on “Current Status of Rebuilding and Modernizing the United States Warheads and Nuclear Weapons Complex,” an NGO side event organized on May 1st by the Alliance for Nuclear Accountability and the Women’s International League for Peace and Freedom (WILPF). While describing the U.S. programs, I got permission from the organizers to cover the modernization programs of all the nuclear-armed states. Quite a mouthful but it puts the U.S. efforts better in context and shows that nuclear weapon modernization is global challenge for the NPT. 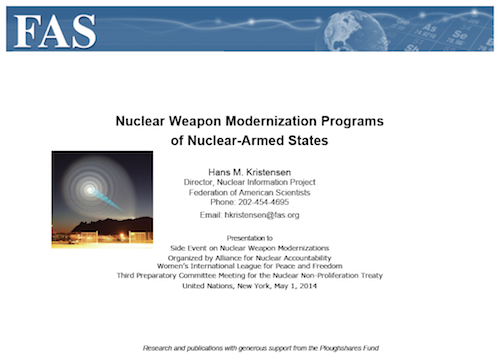 The second panel was on “The Future of the B61: Perspectives From the United States and Europe.” This GNO side event was organized by the Nuclear Age Peace Foundation on May 2nd. In my briefing I focused on providing factual information about the status and details of the B61 life-extension program, which more than a simple life-extension will produce the first guided, standoff nuclear bomb in the U.S. inventory, and significantly enhance NATO’s nuclear posture in Europe. 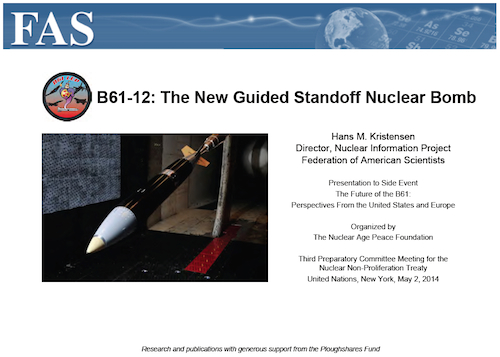 The 2014 PREPCOM is also the event where the United States last week disclosed that the U.S. nuclear weapons stockpile has only shrunk by 309 warheads since 2009, far less than what many people had anticipated given Barack Obama’s speeches about “dramatic” and “bold” reductions and promises to “put an end to Cold War thinking.”

Yet in disclosing the size and history of its nuclear weapons stockpile and how many nuclear warheads have been dismantled each year, the United States has done something that no other nuclear-armed state has ever done, but all of them should do. Without such transparency, modernizations create mistrust, rumors, exaggerations, and worst-case planning that fuel larger-than-necessary defense spending and undermine everyone’s security.

For the 185 non-nuclear weapon states that have signed on to the NPT and renounced nuclear weapons in return of the promise made by the five nuclear-weapons states party to the treaty (China, France, Russia, United Kingdom, and the United States) “to pursue negotiations in good faith on effective measures relating to the cessation of the nuclear arms race at early date and to nuclear disarmament,” endless modernization of the nuclear forces by those same five nuclear weapons-states obviously calls into question their intension to fulfill the promise they made 45 years ago. Some of the nuclear modernizations underway are officially described as intended to operate into the 2080s – further into the future than the NPT and the nuclear era have lasted so far.