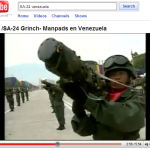 Sri Lanka: Terrorist group had access to more than a dozen SA-14s

Alleged arms traffickers accused of conspiring to exchange firearms, rocket-propelled grenades, anti-tank weapons, explosives for cocaine also reportedly offered to sell “17 or 18 surface-to-air missiles” to US informants whom they believed were members of the Colombian terrorist organization, the FARC. One of the alleged conspirators, Jamal Yousef, was transferred from Honduras to the United States in August. According to US court documents, the conspirators claimed that the weapons were smuggled out of Iraq and were being stored in the home of an “active member of Hezbollah” in Mexico. Ominously, the alleged conspirators reportedly told the US informant that “…additional customers were bidding on the weapons cache.”

It is still unclear whether the alleged conspirators actually had access to the weapons identified in the indictment, including the missiles. Court documents mention photographs of the weapons cache received by the DEA’s informant but do not or indicate which of the weapons allegedly offered for sale were visible in the photographs or if the photographs are authentic. The Arms Sales Monitoring Project will continue to monitor this case and report additional details as they become available.

According to ABC News, “increased concerns” about a possible MANPADS attack contributed to a US government decision to cancel the first direct flight from the US to Nairobi, Kenya.  It is unclear what prompted the concerns, or whether armed groups currently operating in Kenya are known to possess man-portable air defense systems (MANPADS).  Kenya was the site of an unsuccessful attempt by al Qaeda-affiliated terrorists to shoot down an Israeli airliner in 2002.

In May, officials from Russia’s Interior Ministry informed the news agency Interfax that they had discovered an Igla MANPADS “…in an unfinished building of a household not far from the Magas airport” in Ingushetia’s Sunzhenskiy District.  No information on the condition, source and intended target of the missile was provided.

In an unrelated report, Interfax reported in October that 20 MANPADS had been seized from militant arms caches in the North Caucasus region from 2003 to 2009.  No additional details were provided.  The region is one of three global hotspots of illicit MANPADS activity identified by the Arms Sales Monitoring Project in a study on MANPADS proliferation from 2001 to 2007.  During this period, insurgents armed with Soviet-designed Strela and Igla missiles shot down several Russian military aircraft, including an overloaded military transport helicopter carrying more than 140 people.  The attack, which occurred near the Chechen capitol of Grozny in August 2002, was the “worst aviation disaster” in the history of the Russian military, according to the Guardian.

In April, the Sri Lankan army discovered four “serviceable” SA-14 surface-to-air missiles abandoned in Northeastern Sri Lanka by the Tamil Tigers, a terrorist group that waged an unsuccessful 26-year civil war against the government. The missiles were reportedly buried near a tree located east of the town of Puthukudiyiruppu which, until recently, was controlled by the Tigers.  Photos of the SA-14s are posted on Flickr.  According to Sri Lankan military officials interviewed by The Island newspaper, the army also found 13 SA-14 tubes discarded by rebels, suggesting that their MANPADS acquisition efforts were fairly successful.

Video footage of a Venezuelan army unit wielding dozens of sophisticated SA-24 MANPADS caught the world by surprise and confirmed reports of an arms deal with Russia rumored to include the missiles.  The sale is the latest in a series of transfers of small arms and light weapons to Venezuela that have alarmed government and private security experts because of the potential for diversion to armed groups in Colombia and elsewhere.   These concerns are fueled by numerous reports of weapons lost, stolen or diverted from the Venezuelan arsenals, and a lack of information about what steps, if any, the Venezuelan government has taken to comply with regional guidelines for controlling and securing MANPADS.

The Arms Sales Monitoring Project has compiled a table of MANPADS transfers reported to the UN Register of Conventional Arms.  The table reveals that importers and exporters have declared transfers of several hundred missiles and launchers to the Register since 2003. Most of these transfers consisted of Igla MANPADS from Ukraine to the US and Azerbaijan, and Swedish RBS-70s to various countries.  Smaller exports of Russian Strelas, French Mistrals and US Stingers were also declared.

Among exporters, Sweden and Ukraine declared the largest number of MANPADS transfers.[1] Other countries who reported on imports or exports of MANPADS at least once during the six-year period include Australia, Belarus, Finland, Germany, Jordan, Latvia, Lithuania, Spain, Sweden, Ukraine, and the United States.  It should be noted that several countries that produce MANPADS did not submit data to the UN Arms Register during this period.  These countries include Egypt, Iran, and North Korea.  China, France, and Russia submitted data on missile exports but the wording of their submissions is not specific enough to distinguish MANPADS transfers from transfers of other types of missiles.  Also absent is data from several prominent importers.  Venezuela, for example, did not report on its controversial acquisition of Russian SA-24 MANPADS.  It is likely, therefore, that much of the global trade in MANPADS is not being captured in the data provided to the UN Arms Register.

The MANPADS transfers table, which was compiled by Scoville Fellow Matt Buongiorno, is available here.

The Obama administration has continued several Bush-era counter-MANPADS programs and scrapped others, according to officials contacted by the Arms Sales Monitoring Project. Among the programs that survived the transition are the Inter-Agency MANPADS Task Force, the State Department’s Conventional Weapons Destruction Program, and the Transportation Security Administration’s program for conducting MANPADS Vulnerability Assessments at US and foreign airports.  The position of Special Envoy for MANPADS Threat Reduction has been eliminated, and an initiative for protecting commercial airliners with anti-missile systems appears to be on the ropes.

The MANPADS Task Force is the central coordinating body for the “International Aviation Threat Reduction Plan” – one of seven plans aimed at implementing the 2007 National Strategy for Aviation Security. The task force is comprised of representatives from the State Department, Defense Department, and the Department of Homeland Security.

The administration is also attempting to expand a program launched in 2001 that helps destroy surplus, obsolete and poorly secured weapons in foreign countries.  The President’s FY2010 budget request includes $81.9 million in funding for the program – nearly double the $47 million appropriated in FY2009.  About a quarter of this funding ($20 million) is requested for programs in Afghanistan.  In June, the House Appropriations Committee passed an appropriations bill that would only fund $65 million of this request, although the committee did praise the program “for its clear and effective results,” and noted that the reduction “was taken without prejudice and due solely to budget restraints” in the committee report.   The Senate’s version of the bill would fund nearly the entire request ($79 million).  The bill now awaits action by the full Senate.

Expansion of the destruction program by the Obama Administration is not surprising given the President’s demonstrated interest in it (Obama co-sponsored a bill strengthening and expanding the program while he was in the Senate), and its track record to date.  Since 2001, the program has funded the destruction of more 1.3 million conventional weapons, including more than 30,000 MANPADS in 29 countries.  The program is a cost-effective, no-nonsense strategy for addressing the threat posed by excessively large or poorly secured foreign weapons stockpiles, and, as such, is likely to continue to enjoy broad bipartisan support in the coming years.

The decision to eliminate the Special Envoy position does not reflect a de-prioritization of the MANPADS threat, stressed US officials. Assistant Secretary of State Andrew Shapiro told the Arms Sales Monitoring Project that “[t]he United States remains committed to combating the threat from terrorist and insurgent use of MANPADS against U.S. military, coalition, and civilian aircraft. This is a priority issue for the Political-Military Bureau and for me personally.”

Another Bush-era counter-MANPADS initiative – protecting commercial airliners with anti-missile systems – appears to have run out of steam, although an imminent report to Congress could pump new life into it, if only temporarily.  According to a DHS spokesperson, the department is finishing up a long-awaited report to Congress on the multi-million dollar program, the goal of which was to evaluate potential technologies for protecting commercial aircraft from MANPADS.  The program was launched in 2003 and was originally limited to assessing systems that could be installed on commercial airliners.  It was later expanded to include evaluation of ground-based systems that would protect airports rather than individual airplanes, and UAVs that would zap missiles from 65,000 feet in the air.

Congressional interest in anti-missile systems appears to have waned since its high point in 2004, when several prominent lawmakers sponsored bills and held press conferences demanding the immediate development and installation of such systems on commercial airliners.  This year, action on this issue by Congress has consisted of a single, modest bill that directs the Secretary of Defense to determine the “feasibility and desirability” of installing defense systems on certain planes in the Civil Reserve Air Fleet.  The bill, which was introduced by Representative Steve Israel in May, is stuck in committee and is unlikely to see any additional action this year.

Given the precarious state of the economy and the budgetary constraints confronting Congress, the chances of the US government or the airline industry embracing a multi-billion program to address what has become a backburner issue for most policymakers are slim at best.  Congress’ reaction to the DHS study will be the real test, however.  Anything short of an enthusiastic response from lawmakers would be a very bad sign for the program’s supporters.

Missile Watch is an online newsletter published by the Arms Sales Monitoring Project at the Federation of American Scientists.  Sign up for Missile Watch.

[1] This is based on the number of transactions, not the number of items, since in some cases (e.g. Sweden) quantities are classified.
Categories: Arms Trade, Man-portable Air Defense Systems, Russia, United States