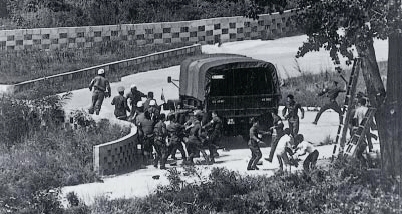 A decision to trim a tree in the Korean demilitarized zone in 1976 escalated into a threat to use nuclear weapons. After a fatal skirmish between U.S. and North Korean border guards, U.S. forces in the region were placed on heightened alert (DEFCON 3) and nuclear forces were deployed to signal preparations for an attack on North Korea. The North Koreans did not interfere with the tree trimming again, so the threat must have worked, the Pentagon concluded.

Thirty years later, North Korea has probably developed nuclear weapons and is trying to develop long-range ballistic missiles to threaten you-know-who, and the United States has ventured into a multi-billion dollar effort to build a missile defense system and a “New Triad” to better dissuade, deter, and defeat North Korea and other “rogue” states.

So, did the threat work?

The “tree-trimming incident,” as the U.S.-North Korean scuffle has come to be known, and other examples of using nuclear threats are described in the article “Nuclear Threats Then And Now” in the Bulletin of the Atomic Scientists.